John Boehner: All doom and gloom

The House GOP boss sees no good news in high job growth. But then Democrats overreach in attacking him 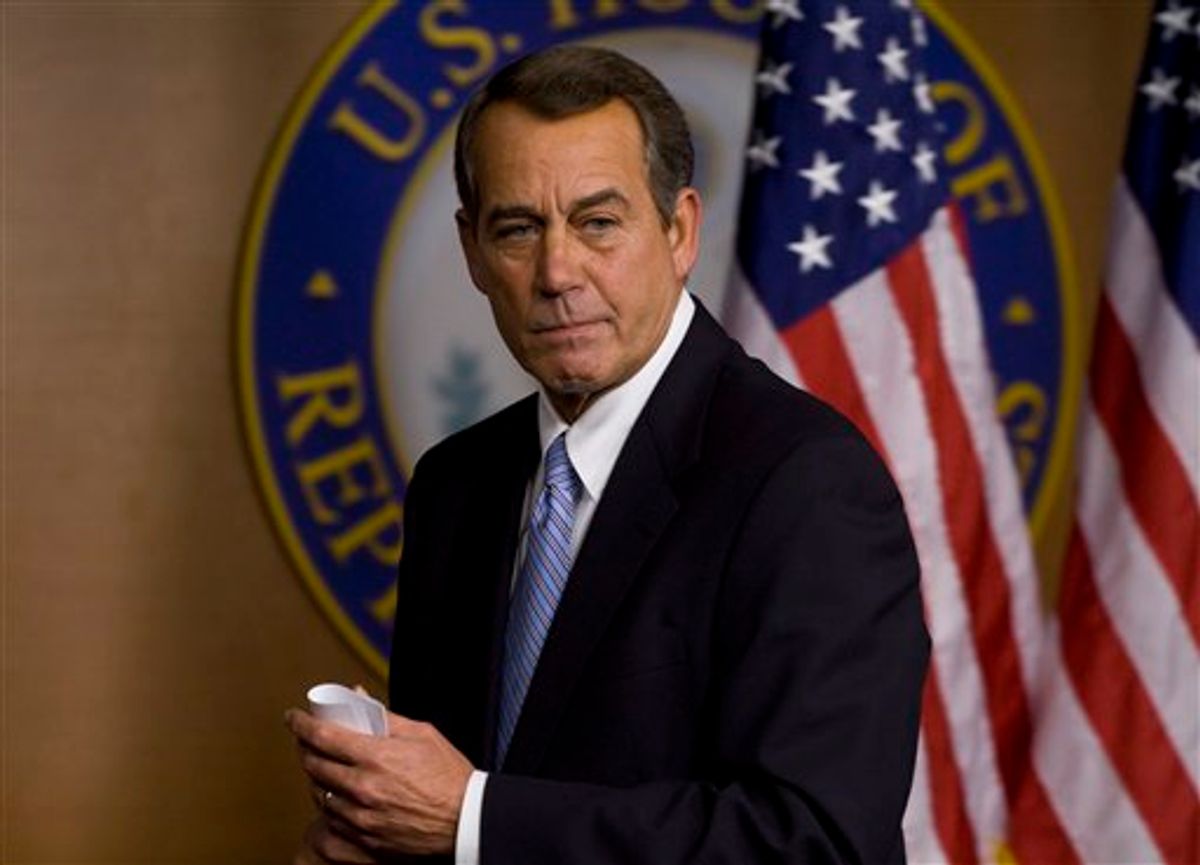 The monthly unemployment stats are sure to be a point of political contention every 30 days between now and November's elections. And if today is any indication, it won't be pretty to watch.

"A 9.9 percent unemployment rate is a harsh reminder that families and small businesses continue to ask, 'Where are the jobs?'" House Minority Leader John Boehner, R-Ohio, said in a statement early in the day. "Washington Democrats have no coherent agenda to create jobs, and no interest in doing anything but continue to spend money we don't have on 'stimulus' programs that don't work."

The problem with that remark -- as Democrats quickly, and with no small amount of joy, pointed out -- is that the federal stats out today made pretty clear that the economy is moving toward recovery. It turned out that in April, 290,000 new jobs were created -- the most in four years. As Salon's Andrew Leonard already noted, the rising unemployment number reflected the fact that more people decided to look for jobs; they re-entered the labor market, for statistical purposes, and therefore drove unemployment up if they didn't immediately find work. (Boehner aides pointed out he did note that more jobs are always good news, but that was a lone ray of sunshine in a very ominous statement.)

Other Republicans joined in Boehner's gloom. Rep. Mike Pence, R-Ind., who appears to harbor at least vague dreams of running for president in 2012, went even farther than Boehner did. "These are difficult times for America's families, and today's unemployment report delivers even more bad news," Pence said in his own statement. "Democrats continue to advance a liberal agenda that is doing more harm than good."

Obviously, 9.9 percent unemployment is intolerable, and there's certainly plenty of reason to criticize the administration's economic policies. It's just that many liberal economists would say they haven't spent enough money trying to help the recovery, not that federal spending is suffocating growth. If more jobs are created next month, it's a little unclear what the GOP strategy will be to talk about it. The bad economy is a good talking point for Republicans, but improvements are hard for them to spin.

Still, Democrats may have overreached a bit in their Boehner-bashing today. Trying to tie the recovery to last year's economic stimulus, the Democratic Congressional Campaign Committee also slammed Boehner for congratulating a fire department in his district that got a federal grant.

Plenty of Republicans have, disingenuously, taken credit for federal spending they opposed, and they deserve to squirm for it. Boehner's case may not be that cut-and-dried, though. The grant was a competitive Department of Homeland Security proposal, awarded through an application process -- not just some largesse that Boehner decided to sprinkle on his district -- and besides, it was originally part of a DHS spending bill that got rolled into a massive omnibus bill that passed Congress last year shortly after the stimulus. Yes, Boehner opposed it, but he said at the time it was because he didn't like the overall spending; there's no way to know whether he would have voted for a separate DHS bill. And at any rate, the grant wasn't part of the stimulus. Boehner's job gloom gave his political opponents plenty of ammo for one day -- there was no need to reach for more.