Is this randy, smirking, self-mocking mega-sequel a parody or a fascist celebration? There's no difference 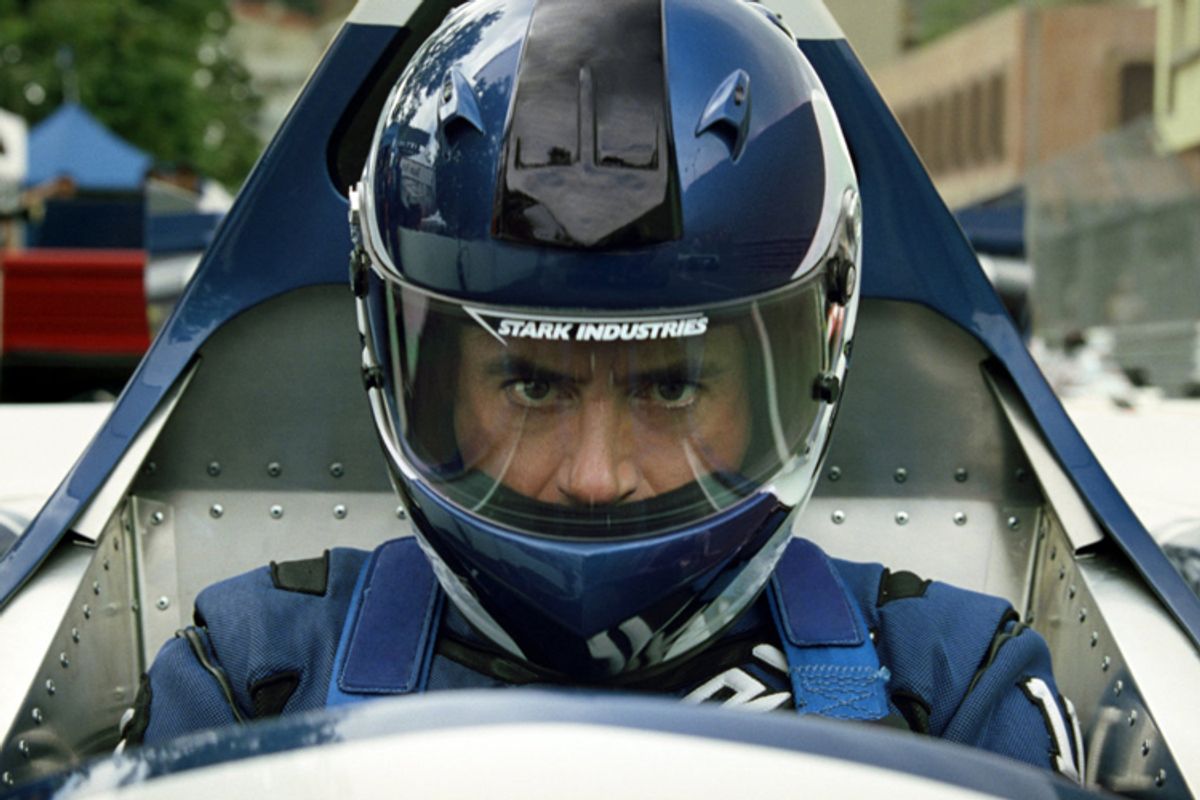 During the first few minutes of "Iron Man 2," it's pretty hard to tell the difference between this movie and Mike Judge's "Idiocracy," or for that matter from a host of earlier nightmarish parables about America's future that preceded it. (Schwarzenegger's late-'80s vehicle "The Running Man," anyone? Anyone?) In a delirious opening scene, arms dealer turned human weapon Tony Stark (Robert Downey Jr.) descends to the stage of some arena-rock spectacle, wearing his impenetrable iron-dong costume, and emerges from it perfectly coiffed, without a drop of sweat, clad in a designer suit that is to Armani couture as Peruvian cocaine is to sidewalk chalk. The crowd roars. Some dude yells, "Blow something up!"

"Already did that," shrugs Tony. He acts mildly surprised to see us, almost bored. He barely seems to register the presence of the two dozen or so hot-pants-clad hotties cavorting around him, who seem imported not from the future but from the past, specifically from the sidelines of a Dallas Cowboys game, circa 1982. A friend I saw the movie with observed that there are no "quotation marks," no irony, in director Jon Favreau's loving, loop-the-loop tracking shots of these dancin' hoochie-mamas with their spray-bronzed legs and perfect Spandex asses. Of course not. How could there be? The kind of sardonic commentary that might have been possible at the time of, say, Paul Verhoeven's "Robocop" has been devoured by our self-knowing pop culture and reprocessed into ambient, empty, unfulfillable desire, which is all a movie like "Iron Man 2" can give you.

Please note: I didn't say it wasn't fun. Downey, Favreau and screenwriter Justin Theroux (better known himself as an actor) have decided to drive Tony Stark's self-regarding, vainglorious character right to the brink of WTF-did-he-just-say hubris. Yes, yes, yes, Downey is blasé, intelligent and hilarious as Tony Stark -- what do you expect me to say? -- but I'm convinced that sticking with this character much longer won't be good for him. (It will be good for his unborn grandchildren, yes; different question.)

Oh, Tony tells the worshipful throng at StarkExpo -- supposedly occurring in Flushing, N.Y., on the real-world site of the 1964 World's Fair -- he's not saying that it's because of him that the world has enjoyed an unmatched period of peace. He's not saying that "never has a greater phoenix metaphor been personified in human history" than his own regeneration as an ass-kicking cyborg, one who is slowly poisoning himself with the toxic metal leaching into his body.

But Tony is saying that he has "successfully privatized world peace," as he tells the cameras on the way out of his confrontation with the Senate Armed Services Committee, which wants him to surrender the Iron Man suit to the military. We're supposed to think he shouldn't, or at least to kind of think that. Iron Man stands astride the globe solo, keeping the North Koreans and Iranians and unidentified wackos at bay, accountable to nothing and nobody except his own conscience, which would be, let us note, the conscience of a depraved, narcissistic war-profiteer zillionaire with a wicked sense of humor. In fairness, that's reasonably true to the spirit of the original Marvel comic, whose hero is a uniquely uncomfortable blend of Nietzschean Superman and self-sacrificing Christ figure.

I'm reasonably certain, based on what I know about Jon Favreau and Justin Theroux, that they want to wield a double-edged sword in "Iron Man 2," and make a vast fortune off a movie that both comments upon (or, ahem, "subverts") the superhero genre and embraces its most militaristic, fascistic, ultra-individualist ideology. They want to be too cool for school while still giving the masses what they want, in other words, but that's a little like looking for the missing quotation marks around those dancing girls' butts. At a certain point -- very quickly -- it stops mattering, and you're left with a misshapen mega-hit movie built around some sparkling dialogue, a few devastating action set-pieces, Scarlett Johansson in her underwear just for the hell of it, and a whole lot of indistinguishable fight scenes that might just as well be in "Rock 'em Sock 'em Robots: The Movie."

"Iron Man 2" feels canny, smart and out of control, which is probably what Robert Downey Jr. was like when he was doing lots of coke. As if we needed any reminding about the actor's wild years, there's a shot of Tony Stark that echoes the memorable morning-after shot of Downey near the end of his 1987 "Less Than Zero." In this case, though, Stark-Iron Man is reclining, with shades and cigarette, within the rooftop Randy's Donuts sign in L.A., and while he is indeed contemplating his past and his future, he presumably hasn't had to blow 14 guys to pay off a drug debt. Samuel L. Jackson shows up right then, as eye patch-wearing secret agent Nick Fury, to say, "Sir, I'm going to have to ask you to exit the donut." (Can you be terrific in a minimal role that will be nonsensical to all the non-comics geeks in the audience? If so, then yes, Jackson is.)

When Tony and his screwball foil Pepper Potts (Gwyneth Paltrow) -- she's his secretary! She's his CEO! She enables his sleazy liaisons! She's the girl for him! -- travel to Monte Carlo for a vintage-auto Grand Prix, Favreau offers up a near-pornographic display of too-rich excess. Again, maybe this is meant as satire and maybe not, but either way it has a subtly destabilizing effect on the narrative. When leathery, grimy, wrinkled and tattooed Mickey Rourke shows up, playing a vengeful Russian physicist with steel teeth who seems to have been moonlighting as a pro-wrestling villain, I cannot have been alone in really, really, really wanting him to kick Iron Man's ass.

In a dazzling special-effects sequence that all on its own comes close to justifying the price of admission, Rourke's Ivan Vanko strides onto the race track in his homemade cyborg suit apparently constructed from dismembered X-ray machines and coat hangers, wielding 15-foot wire whips crackling with lightning-strength electricity. The combination of Rourke's slow, ugly, monumental grace, the magnificent machinery bearing down on him at 170 miles per hour and the hackneyed grandeur of the Monaco chicane is unspeakably gorgeous -- it's the one sequence in Favreau's two "Iron Man" movies where he seems to have learned something about action cinema from (say) John Woo.

Rourke's villain doesn't get much screen time in "Iron Man 2," and that may be because every time he appears he threatens to root this movie's moderately entertaining, slam-bang spectacle in something resembling moral reality -- and God knows we can't have the audience opening that door. As Tony Stark's incompetent corporate rival Justin Hammer, Sam Rockwell is a comic-relief nerd without much to do. Although I will say that Rockwell's soft-shoe Michael Jackson dance routine, performed while wearing a Bluetooth headset and a truly heinous pale blue suit that looks as if it was left over after prom night in 1979, was probably my favorite moment -- for its delightful and total irrelevance -- in the entire movie. One can only wonder: How many times did Theroux write a "Please, Hammer, don't hurt 'em" joke, only to take it out?

Special mention should be made of one of Favreau's cleverest touches, using John Slattery (that's Roger Sterling from "Mad Men") to play Stark's late father in a 16mm archival-film excerpt that provides a central clue to one of the film's not very interesting mysteries. Drawing on his mysterious ability to cultivate emotional depth in a character who appears cartoonish and insincere, Slattery goes a long way toward explaining Tony Stark's damaged character, while suggesting (in a very brief appearance) that the kid still has a lot to learn from his old man. It's a humanizing touch that, like Rourke's role, threatens to undermine the picture.

As for Scarlett Johansson's near-cameo, I've already said that she looks good in her underwear. She looks fine in her other outfits too. At one point her double-agent character comes purring up to Stark with a martini she's just made and asks him, "Is that dirty enough for you?" Anything else you'd like to know?

This is a movie where Christiane Amanpour whores herself out worse than Downey's character did in "Less Than Zero." Not because she appears in the film, although that was a regrettable decision, but because in so doing she equates herself to Bill O'Reilly, also seen here as himself, opining on the world significance of Iron Man. But asking whether the "Iron Man" franchise has jumped the shark is meaningless. It is the shark. That question, indeed, assumes the existence of something in the universe that is non-shark. Robert Downey Jr. has stared the shark in its abyssal eyes until it flinched, blown pot smoke up its horny nostrils and kneed it in the 'nads. Now he's back onstage with the dancing hotties.