We questioned Harvard Law's diversity record under Elena Kagan. The White House pushed back. But they got it wrong 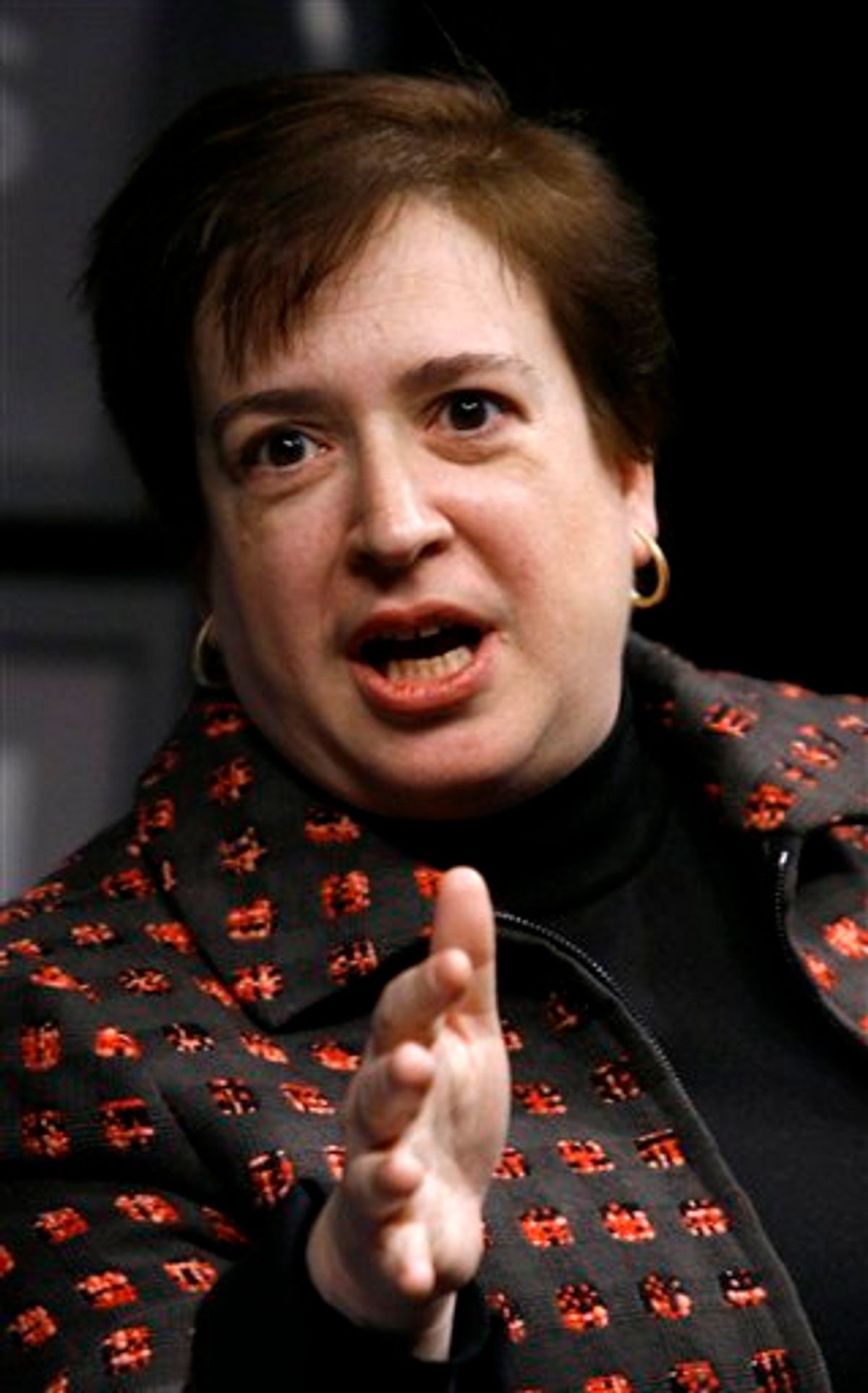 FILE - In this Jan. 28, 2010 file photo, U.S. Solicitor General Elena Kagan speaks during a panel about Women Advocates of the Supreme Court Bar at the Newseum in Washington. Liberals fear that after helping elect President Barack Obama he'll abandon them when he nominates a Supreme Court justice, choosing a consensus-building moderate rather than a liberal in the mold of retiring Justice John Paul Stevens. (AP Photo/Jose Luis Magana, File) (AP)
--

Like everyone in the legal academy over the last decade, we have watched with admiration the amazing changes that Elena Kagan brought to Harvard Law School. A fractured faculty, divided among ideological lines, seemed finally content, if not united. A boisterous student body was finally pacified. The logjam that had stopped faculty hiring had burst. Indeed, she hired so many new faculty the Harvard Law School’s newspaper’s 2008 April Fool’s issue declared, "Dean Kagan Hires Every Law Professor in the Country."

The first woman Dean of Harvard Law School had presided over an unprecedented expansion of the faculty -- growing it by almost a half. She had hired 32 tenured and tenure-track academic faculty members (non-clinical, non-practice). But when we sat down to review the actual record, we were frankly shocked. Not only were there shockingly few people of color, there were very few women. Where were the people of color? Where were the women? Of these 32 tenured and tenure-track academic hires, only one was a minority. Of these 32, only seven were women. All this in the 21st Century.

One of us aired some of these concerns, which we expressed in a joint letter to the White House, on a blog. The White House never responded directly to us, but it did provide a defense of the Solicitor General’s record to concerned civil rights groups, who then made the document public. (Salon obtained a copy, which can be found here.) We are glad that the White House has responded to some of the questions that we have raised.

Unfortunately, the White House’s defense of the solicitor general’s hiring record while she was Dean at Harvard is surprisingly weak.

To begin, and most notably, the White House does not dispute our basic facts. When Kagan was dean of Harvard Law School, four-out-of-every five hires to its faculty were white men. She did not hire a single African American, Latino, or Native American tenured or tenure track academic law professor. She hired 25 men, all of whom were white, and seven women, six of whom were white and one Asian American. Just 3 percent of her hires were non-white -- a statistic that should raise eyebrows in the 21st Century.

These are the facts that the White House does not try to defend because these facts are indefensible. For those who think that more women and minorities qualified to serve on the Harvard Law faculty were simply nonexistent, one need only look at Harvard’s primary rival--Yale Law School. There Dean Harold Koh led the law school during almost the same period (Dean Koh, from 2004 to 2009, and Dean Kagan, from 2003 to 2009). Dean Koh hired far fewer faculty members--just ten--but he still managed to hire nearly as many women (5 of 10 at 50 percent), and just as many minorities (1 of 10 at 10 percent) as Dean Kagan.

Yet another comparison seems appropriate: A knowledgeable source tells us that Seventh Circuit Judge Diane Wood has had a splendid history of hiring women and minorities as law clerks.

The White House’s primary response -- like the magician performing a trick--is to point our attention elsewhere. The White House says the hiring numbers are misleading because they do not reflect the number of offers that Dean Kagan made to women and scholars of color. But this seems a bit hard to believe. Do women and people of color find a tenured or tenure-track professorship at Harvard Law School less attractive than white men? Do they really prefer to teach at less prestigious schools? Or if they only prefer not to teach at Harvard because of perceived hostilities to women and people of color, why is it that Kagan could somehow overcome these perceptions when it came to conservatives, but not women and people of color? After all, part of the praise for Kagan is that she made Harvard Law School welcoming again for conservatives—in this case, conservative white men.

In a sleight of hand, the White House instead provides the statistics for the number of visiting offers made under Dean Kagan. A visiting offer, however, is hardly tantamount to an offer to join the tenured faculty. Many visits are not offered with an eye towards permanent appointment. In other words, "visiting professor offers" without actual offers for permanent hire do nothing to increase meaningful faculty diversity. Many visits are made simply because the institution needs a temporary person to teach a class; law schools call these "podium" visits. Moreover, many visitors are foreign law professors who are temporarily rounding out the school’s curricular offerings. These foreign law professors could conceivably be cast as "minorities" in the American scheme, but such casting would be extremely misleading as many of these professors do not share the history and experiences of people of color in the United States and may not even identify as racial minorities, especially if they are part of the controlling majority or even minority in their own country.

In any event, even if the visiting numbers were probative they could be seen as undermining the claim that Dean Kagan did what she could for faculty diversity. Apparently, there were women and minorities available to serve as visitors, but very few to actually hire permanently. When permanent offers are made by a law school faculty, it is the dean’s charge to convince that person to come. What would it say of Dean Kagan’s powers of persuasion that she could not attract more minorities and women with offers to join one of the most prestigious faculties in the world? Should we wonder about her ability to convince people to join her in other enterprises, when the rewards are not so obvious?

The question raised by Kagan’s hiring record is quite simple: what accounts for it? The inevitable conclusion is that gender and racial equality was not a pressing agenda for then-Dean Kagan. To this way of thinking, it does not matter if you don't hire people of color and it does not matter if you only hire one-in-five women because no one is going to care. A commitment by a dean to hiring women and people of color in tenure and tenure-track positions often takes courage and conviction. It is reflective of one’s core commitments that all opportunities must be made available without regard to race and gender and a willingness to fight for that commitment. It reflects the fact that you are willing to visibly take a stand -- to risk something.

Who but ivory tower types care who teaches at Harvard Law School? Whether deserved or not, the reality is that the nation’s elected officials and business leaders often call upon Harvard’s law faculty. Indeed, many serve in the Obama Administration, as exemplified by Solicitor General Kagan herself. Equally important, its faculty serve as role models for generations of future leaders -- the future Barack Obama’s of the world. Today, President Obama continues to recognize the importance of having an administration, federal judiciary, and indeed a Supreme Court that reflects the diversity of Americans. Yet General Kagan, who herself would benefit from his vision if chosen for the Supreme Court, showed no similar carry-through as Harvard Law School’s first female dean. In others words, there is a Latina on the Supreme Court, but there is no Latino on the Harvard Law School faculty.

Finally, supporters contend that minority student matriculation increased slightly (from 29 percent to 31 percent) during Kagan’s tenure as dean. We offer two observations about this claim. First, the memo does not give us a longer historical view to allow us to assess whether the 29 percent in 2003 was a statistical blip. Second, and most important, should not Harvard’s faculty hiring more closely resemble its student percentages—the exact pool from which Harvard would pull much of its faculty? How could the total percentage of minority students at the end of Kagan’s tenure be 31 percent, while the percentage of her minority faculty hires remain only 3 percent? What signal does that send to the students--both minority and non-minority--at Harvard Law School?

We do not know Dean Kagan personally. She cites Justice Thurgood Marshall, for whom she clerked, as her legal hero. She clerked for Judge Abner Mikva, second-to-none in his commitment to equality. She became the first Charles Hamilton Houston Professor of Law. All of these facts give us some heart. But we can rely only on her record of accomplishment as she is considered for a lifetime appointment to a position of such constitutional significance. That record raises a significant question about her willingness to go to bat for racial and gender equality.

When he was a law student, the young Barack Obama protested the lack of diversity on the Harvard Law faculty. He praised the legendary Derrick Bell for leading these protests. Professor Bell, in an act of enormous courage, was willing to yield his Harvard Law professorship to the cause of increasing faculty diversity. What a twist of fate if the first black president -- of both the Harvard Law Review and the United States of America--seemed to be untroubled by a 21st Century Harvard faculty that hired largely white men.

This piece has been slightly revised since its initial publication.