This week in crazy: Michael Brown 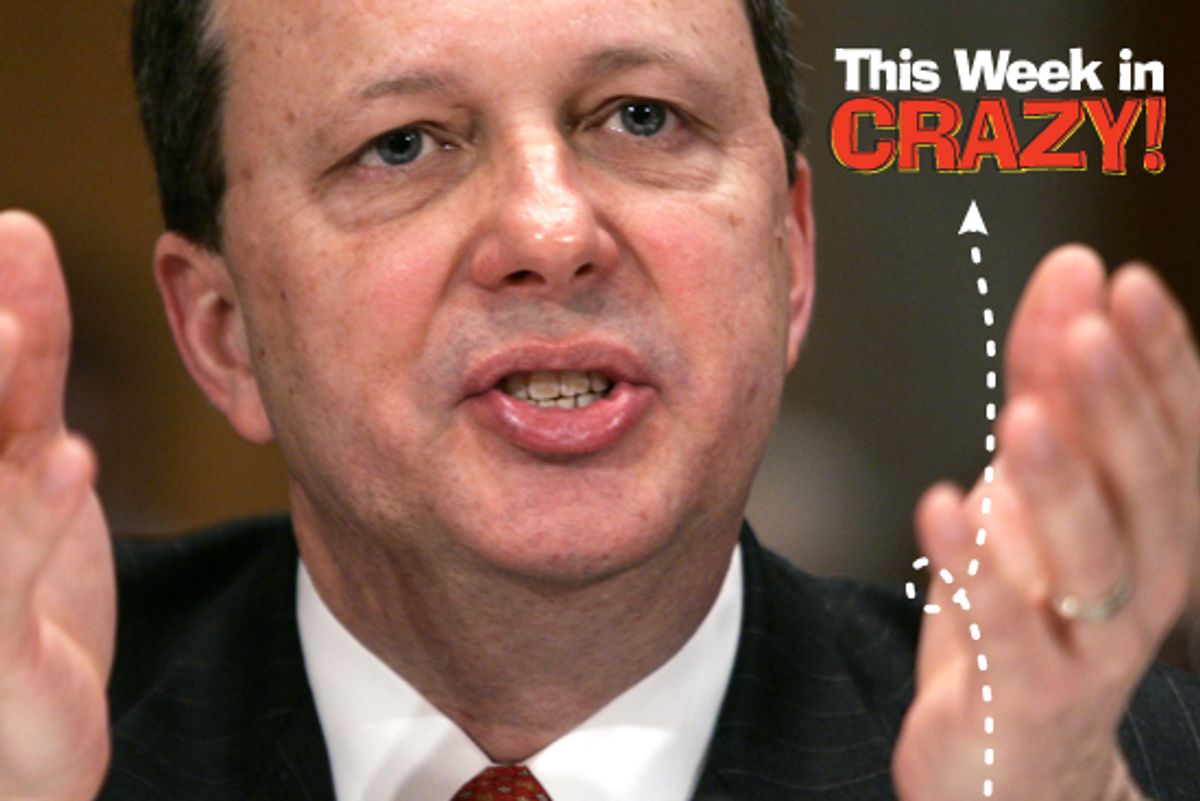 Brown seems to have a knack for showing up, a little late, and doing whatever he can to exacerbate the suffering of people in Louisiana. Five years ago, of course, he was running the Federal Emergency Management Agency when Hurricane Katrina crashed through the Gulf of Mexico and the federal levees surrounding New Orleans failed. As the city flooded, Brown exchanged dopey e-mails with his staff, bragging about where he bought his suits (Nordstrom), calling himself a "fashion god" and giving aides advice about important matters like what to order at Sonic ("a #2, tater tots, large diet cherry limeade"). Only that kind of strong leadership could have made it possible for FEMA to lose track of ice, water and food, leave thousands of New Orleans residents stranded at the Superdome and the Convention Center and then take months to get subpar temporary housing into the region.

With a track record like that, Brown was virtually guaranteed to pop up somewhere on cable TV as an oil spill threatened the Gulf Coast. Surprisingly enough, he surfaced on Fox News Channel. In an interview with Neil Cavuto on Monday, Brown dropped the sort of knowledge that had, in the past, won him powerful posts like judges and stewards commissioner of the International Arabian Horse Association.

"In Katrina, FEMA showed up immediately," Brown told Cavuto. Well, maybe, but they didn't actually do anything upon arrival. Never mind that. Soon enough, Brown moved on to the really crazy part. "Now you're looking at this oil slick approaching, you know, the Louisiana shore, according to certain -- NOAA and other places, if the winds are right, it will go up the East Coast," Brown said. "This is exactly what they want, because now he can pander to the environmentalists and say, 'I'm going to shut it down because it's too dangerous,' while Mexico and China and everybody else drills in the Gulf. We're going to get shut down."

In Brown's version of events, the story of Katrina was the sad tale of a lonely former horse bureaucrat struggling valiantly -- but fruitlessly -- to get the White House to help New Orleans. "I should have walked away, found Neil Cavuto, walked up to his camera, and said, 'Neil, I have been saying for weeks this is not working and we need help,'" he told Cavuto. "Now, Bush would have fired me anyway, but at least we would have gotten the attention we needed right away. And I just hope there's somebody out there now that will do what I had failed to do."

Brown's version of the BP oil spill bore about as much resemblance to reality as his Katrina narrative did. "I would not be surprised if the White House said, you know, we might be able to, guess what, do what? Use this crisis to our advantage," he said. "Let this crisis get really bad, and then we will step in. We will be able to shut down offshore drilling. We will be able to turn to all these alternate fuels." Which makes perfect sense, except for the part where the Obama administration infuriated environmentalists by proposing to expand offshore drilling two months ago. It would be nice to be able to say Brown provided a scrap, a shred of evidence for his conspiracy theory, but alas, he didn't, and Cavuto -- intrepid journalist that he is -- didn't bother to ask him for one.

Five years after the floods ravaged New Orleans, the city still hasn't fully recovered (despite recent efforts by Republicans to pretend it has). In neighborhoods like Tremé, Mid-City and Gentilly, which sat under feet of water, empty houses and boarded-up storefronts are still common. A quarter of the city's population may not have come back from the storm. Meanwhile, the oil spill -- which Brown so cavalierly dismissed as a deliberate plot -- threatens to make the next hurricane worse, by destroying more coastal marshland. The Gulf, already in a fragile state because of the offshore drilling Brown so dearly loves, is sucking up 210,000 gallons of oil a day, thanks to BP.

And Brownie, you'll have to excuse me if I take your nonsense a little personally. While you fretted about whether to roll your sleeves up in late August 2005, I interviewed some of the people you left sitting in the sun, with no food and hot water, for days. This week, I talked to fishermen, barely literate, who may have to try to find new work if the oil spill kills off Gulf wildlife. If you want to keep spewing your conspiracy theories and your self-justifying Katrina analogies, you should probably take 'em somewhere where I don't have to hear them.

And for your own sake, I don't suggest you try to bring them to New Orleans.