Europe's bailout to end all bailouts

Stock markets across the world celebrated a trillion dollar eurozone rescue plan. Voters may not be so delighted 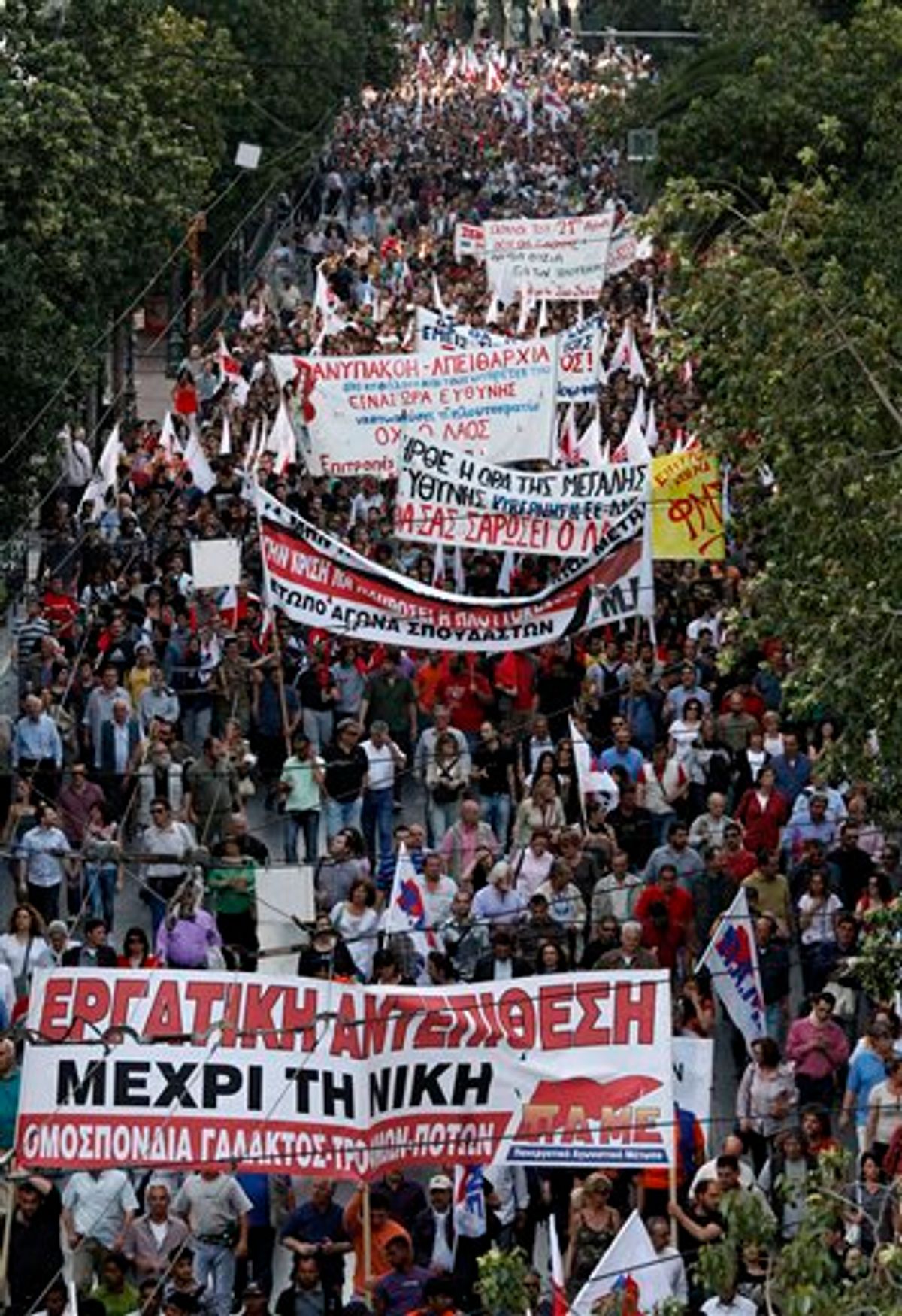 Pro communist protesters march during an anti government rally in Athens on Thursday, May 6, 2010. Greek lawmakers approved a crucial austerity bill Thursday needed to tap 110 billion ($140 billion) in bailout loans from other eurozone countries and the International Monetary Fund, as massive crowds gathered outside parliament to protest the measures. The bill passed with 172 votes in favor and 121 against. Greeks have been outraged by the government's proposed fiscal measures, and demonstrations turned violent on Wednesday during a nationwide general strike, leaving three people dead after becoming trapped in a burning bank torched by demonstrators. (AP Photo/Dimitri Messinis) (AP)
--

Investors like bailouts. The bigger the better. On Sunday, European leaders announced a $1 trillion plan to stabilize faltering eurozone countries and address the European financial crisis. The Wall Street Journal called the plan "audacious." One European finance minister described it as a "shock and awe" commitment. And stock markets worldwide exploded in glee.

It's not every day that you see the Dow Jones Industrial Average jump up 300 points right after the opening bell -- and then keep going. 45 minutes later, the Dow was up 411 and other indices were following suit. The market euphoria can be taken not only as a sign of just how ambitious the bailout plan is, but also of how dire the European fiscal situation has become.

The bailout plan includes a commitment by the European Central Bank to start buying distressed eurozone and private bonds, " to ensure depth and liquidity" in markets -- something that the ECB's president, Jean-Claude Trichet, had dismissed as a possibility just last Thursday. According to the Wall Street Journal the plan also employs "novel interpretations" of European Union treaties to get around various "no-bailout" clauses and prohibitions against member states assuming the debt of other member states.

But while market participants may be delighted, the populations of the nations that will assume most of the financial burden funding the bailout may not be so ecstatic. By making their commitment this weekend, European leaders made a clear statement that they intend to save the euro and preserve the unity of the eurozone. In the years -- and elections -- to come, we'll find out if German and French and Greek and Spanish citizens support such "audaciousness" or decide to throw the bailout bums out.