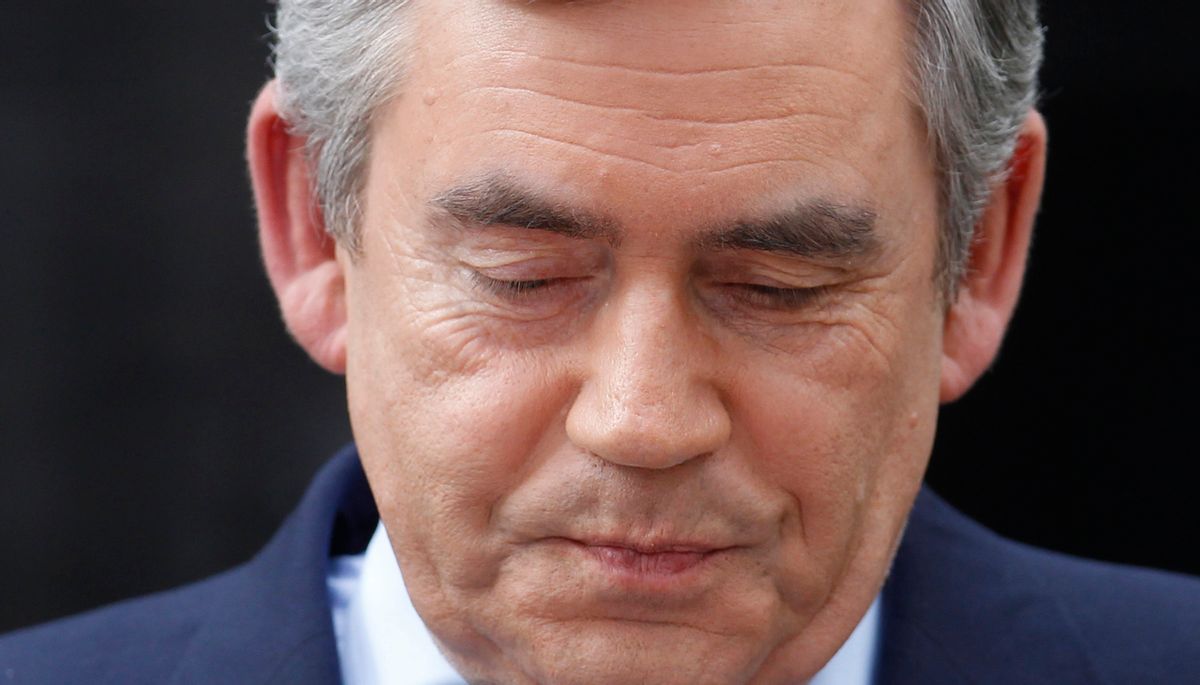 Britain's Prime Minister Gordon Brown delivers a statement outside his official residence of 10 Downing Street in London May 10, 2010. The Liberal Democrats want to hold formal talks with the ruling Labour party over forming a new government, British Prime Minister Gordon Brown said, adding he would step aside by later this year. "(Lib Dem leader) Mr Clegg has just informed me that while he intends to continue his dialogue that he has begun with the Conservatives, he now wishes also to take forward formal discussions with the Labour party," he told reporters. REUTERS/Andrew Winning (BRITAIN - Tags: ELECTIONS POLITICS BUSINESS) (Reuters)
--

Gordon Brown, the intensely unlikable soon-to-be-former prime minster of the U.K., just announced that he will step down as the leader of the Labour Party.

Brown's move looks like an attempt to stop the Liberal Democrats from forming a coalition government with the Conservatives, who won the most seats in last Thursday's national elections, but who didn't win enough to form a government. No one's sure how well the Lib Dem/Tory negotiations are going; some Tories say they're going well, but Tory right-winger Iain Duncan-Smith said today that the Tories are uninterested in electoral reform, a Lib Dem priority that would end "first-past-the-post" elections and help third parties pick up more seats in Parliament.

Brown is proposing a "progressive" government, comprising Labour, the Lib Dems, and presumably the SNP, Plaid Cymru, the SDLP and the Alliance. Electoral reform would be a priority.

And it's been revealed that Labour has been having semi-secret meetings with the Lib Dems already, which will probably not help those Tory negotiations.

So! After the so-called "Americanisation" of the recent British elections, including live televised debates between the three party leaders for the first time in British history, it's now entirely possible that the next prime minister won't be any of those three people.

Amusingly, the BBC asked a "bookmaker" to predict the next Labour leader, who very well might be prime minister of the U.K.:

David Miliband is the 44-year-old foreign secretary. He's the son of Marxist theorist Ralph Miliband. Ed is his brother (his support runs to the left of David's). Darling is the chancellor of the exchequer. Johnson is the home secretary. Ed Balls, a longtime Brown advisor, is the longtime secretary of state for children, schools, and families. He also has no shot at becoming the prime minister, because, come on, his name is "Ed Balls."

But a new leader most likely wouldn't be selected until September, which means the Liberal Democrats would have to join a coalition with the incredibly unpopular Brown as prime minister for the time being, followed by someone the nation didn't "vote for."

You can listen to Brown's statement here, and right now the BBC is live streaming its news broadcast here.