The liberal case against Kagan is overstated 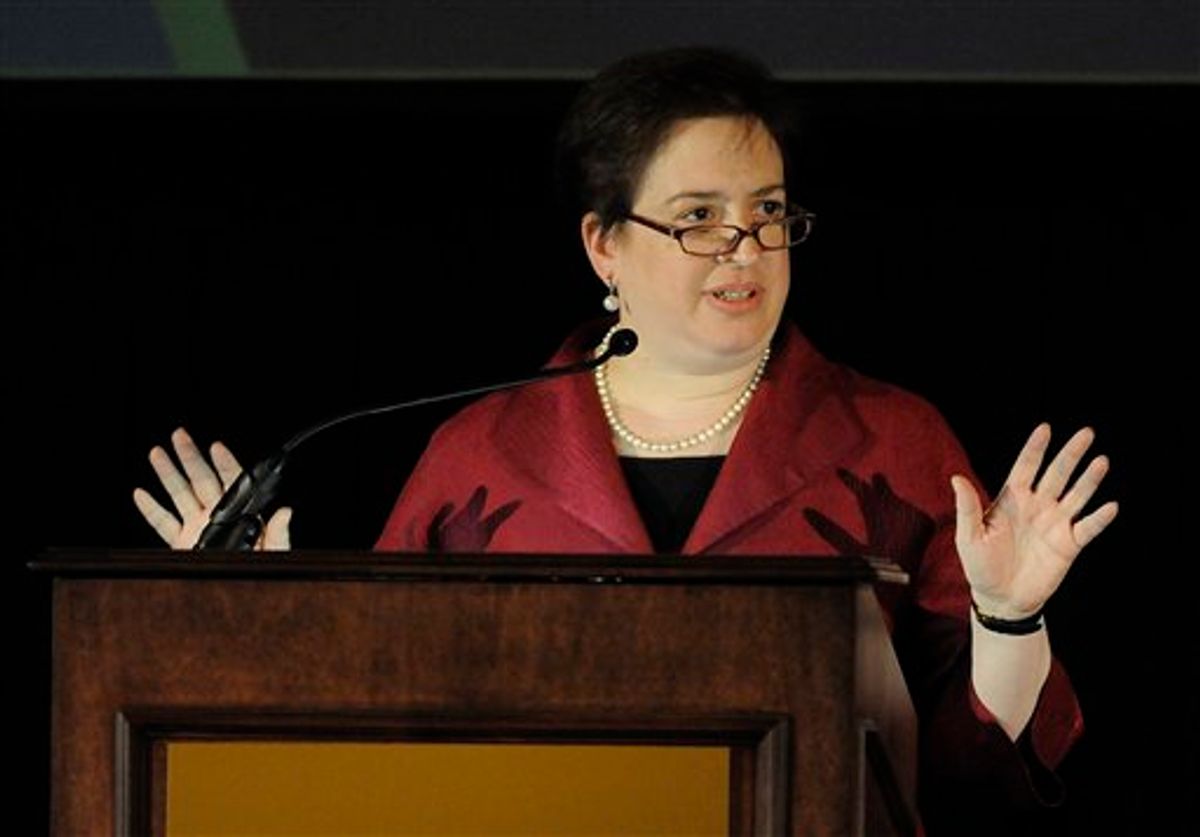 Over the past several weeks, a chorus of progressive voices has portrayed Elena Kagan -- whom President Obama is expected to nominate for the Supreme Court on Monday -- as an intellectual cipher. She may be smart, they argue, but she has provided few clues about her thoughts on any major legal issues and even fewer about her judicial philosophy. Even worse, her critics claim, what we do know about Kagan’s beliefs suggests that she is sympathetic to Bush-style arguments on executive power and thus, on at least one major issue, threatens to move the court significantly to the right.

These criticisms are, at the very least, dramatically overstated. A review of Kagan’s professional record and writings suggests that she would fit comfortably on the left-hand side of the judicial spectrum.

To begin with, Kagan’s professional biography reveals that she has spent the last several decades working closely with some of the country’s best known left and center-left figures. After graduating from Princeton, where she wrote an article hoping that a “more leftist left” would emerge in American politics, Kagan enrolled at Harvard Law School, where she served as a research assistant for the famed liberal law professor Larry Tribe. After her graduation from Harvard, she clerked first for Abner Mikva, a legendary figure of the American political and judicial left (and an Obama advisor). She next clerked for Thurgood Marshall, another liberal icon, whom Kagan has called her legal hero and the greatest lawyer of the 20th Century.

Following her clerkship with Marshall, Kagan worked on Michael Dukakis' presidential campaign, helped shepherd Ruth Bader Ginsburg’s nomination through the Senate Judiciary Committee, and served two separate stints in the Clinton administration before assuming her current role as Obama’s solicitor general. None of this speaks directly to Kagan’s personal beliefs, of course. But it does suggest that she feels most at home in the company of those who are ideologically left-of-center.

Of course, left-leaning political sensibilities don’t necessarily correlate with a liberal judicial vision. One can believe, for example, in the goals of social equality and economic fairness but think that such ends should be achieved legislatively, not judicially.

Kagan’s (admittedly scant) writings on the subject suggest that she might instead embrace Marshall’s view that the Constitution should be interpreted expansively to provide rigorous protections for the dispossessed. In eulogizing her former boss in a 1993 law review article, Kagan observed that Marshall’s pragmatic jurisprudential approach considered not just the law as written, but “the way in which law acted on people’s lives.” As Kagan noted, this approach demanded “special solicitude for the despised and disadvantaged.” Kagan lauded this view of the judicial role, saying that “however much some recent justices have sniped” at Marshall’s vision, it remained “a thing of glory.” In the article’s closing, Kagan nodded to the progressive view that the Constitution grows and adapts to meet the needs of a changing society, giving Marshall “credit” for our “modern Constitution.”

Even if Kagan’s judicial beliefs don’t align with Marshall’s in all particulars, her willingness to praise his general judicial principles suggests that she, like Marshall, sees the Constitution as a dynamic bulwark against majoritarian tyranny and political persecution. This contrasts not only with the beliefs of Marshall’s antagonists like Scalia, who view the Constitution as static and unchanging, but even with Justice Sonia Sotomayor, who stated blandly at her confirmation hearing that her only interpretive guidepost was “fidelity to the law.”

A 1995 book review penned by Kagan provides indirect support for the conclusion that she would, if elevated to the Supreme Court, fit comfortably with the court’s left-leaning members. In the piece, which lamented the vacuity of the post-Bork Supreme Court confirmation process, she called Breyer and Ginsburg “clear moderates,” a view held by many on the left (who often bristle when the press refers to the John Paul Stevens/Stephen Breyer/Ginsburg grouping as the court’s “liberal” wing), but few on the right. She also suggested that many of Scalia’s ideas were “wrong-headed[” and also complained that Breyer’s confirmation hearing lacked any discussion of whether he was “too moderate.” Nothing in the review directly illuminates Kagan’s own views, but it is difficult to see these words in the mouth of a judicial conservative.

Because Kagan has never been a judge and because of her underwhelming volume of scholarship, we don’t have many hints as to how her philosophy would play out in particular cases. Evidence is not entirely absent, however.

There are, for example, indications that Kagan would join Anthony Kennedy and the court’s left-leaning members in stringently reviewing the president’s terrorism-related actions. In 2005, for example, she and three other law school deans (including Harold Koh) sent a sweeping letter to the Senate Judiciary Committee repeatedly and forcefully denouncing unreviewable executive power.

The specific subject of the letter was an amendment to a piece of pending legislation that purported to strip courts of jurisdiction to review the legality of detainees’ imprisonment. According to the deans, the amendment, in seeking to immunize the executive branch from review, struck “at the heart of the rule of law.” Calling unchecked presidential discretion over detainees “fundamentally lawless,” the deans went on to state, “[w]e cannot imagine a more inappropriate moment to remove scrutiny of Executive Branch treatment of noncitizen detainees.” (The amendment, slightly modified, remained in the final bill. In 2008, the Supreme Court sided with the deans, ruling in a 5-to-4 decision that the amendment, along with a subsequent law, unconstitutionally restricted the detainees’ right to challenge their confinement.)

It’s true that in her role as solicitor general, Kagan has defended the Obama administration’s (frequently broad) claims of executive authority. But it’s hardly surprising that a president would take an expansive view of presidential power, and it is Kagan’s job as solicitor general to defend those views. The only time she has suggested that her personal views on executive power concur with the administration’s was during her confirmation hearing, where she agreed with Lindsey Graham that “we are at war” and that the president can detain enemy combatants for the duration of the conflict, however long that lasts. But these statements, which are mild compared to her 2005 letter to the Judiciary Committee, don’t presage any particular leanings on detainee-related cases. The former view is taken as a given in the court’s opinions on detainee rights, and the latter assertion was repeatedly stated by the Supreme Court in a 2004 opinion, which Justice Breyer joined.

The richest source of clues about Kagan’s ideology is her First Amendment scholarship, which, along with Kagan’s other writings, suggests that her views mirror those of the court’s left-leaning members. In one article, for example, she said that the Supreme Court made the “correct decision” in invalidating a law that outlawed the mutilation of the U.S. flag, a 5-4 opinion hailed by free speech advocates (and one from which Justice Stevens notably dissented). In the same article, she warned against laws that vest law enforcement officers with discretion to arrest speakers based on the effects of their speech, writing, “in case after case, decade after decade, police officers have responded hastily, to say the least, to the risk of disorder caused by disfavored speech.” And in another article, she suggested that the court acted hastily in rejecting a First Amendment challenge to federal regulations that forbade certain grant recipients from providing abortion counseling. These writings are careful and measured, but they display the basic skepticism of and sensitivity to government involvement in matters of speech that animate the opinions of many liberal jurists.

For progressives, the most troubling statement in Kagan’s past might be her flat assertion that “there is no federal constitutional right to same-sex marriage.” The bluntness of this statement, which Kagan made in written response to a question from one of the members of the Judiciary Committee, is notable given the rest of Kagan’s answers, which are largely equivocal and hedged. (The answer also seems somewhat inconsistent with Kagan’s response to another question, where she states, “I view as unjust the exclusion of individuals from basic . . . civic . . . opportunities of our society on the basis of . . . sexual orientation.”) Though it is possible that the quote reflects Kagan’s personal views on same-sex marriage, it’s also possible that Kagan was merely describing the current state of the law (and perhaps attempting to defuse any controversy surrounding her vocal support of gay rights while dean of Harvard Law School).

The evidence we have from Kagan’s life and works might not be abundant, but on the whole, it shows her to be a conventional Democrat who is comfortable with at least certain progressive uses of judicial power. It’s also true that Kagan’s writings are often frustratingly and excessively circumspect, a trait that was probably aggravated by Clinton’s failed attempts to place her on the federal bench in 1999. The charge that Kagan has failed to clearly espouse a progressive approach to constitutional interpretation is a fair one, but that’s a much different accusation than the claim that she’s a blank slate. It’s one thing to lack progressive ideals; it’s another thing to mute them in the service of ambition. We might not admire Kagan for that choice, but it hardly suggests that her elevation to the court would result in the constitutional cataclysm that some on the left apparently fear.