Why Elena Kagan won't be the next Harriet Miers

Liberals grumble about Kagan's lack of a record, but the White House made the safe pick for a reason -- it's safe 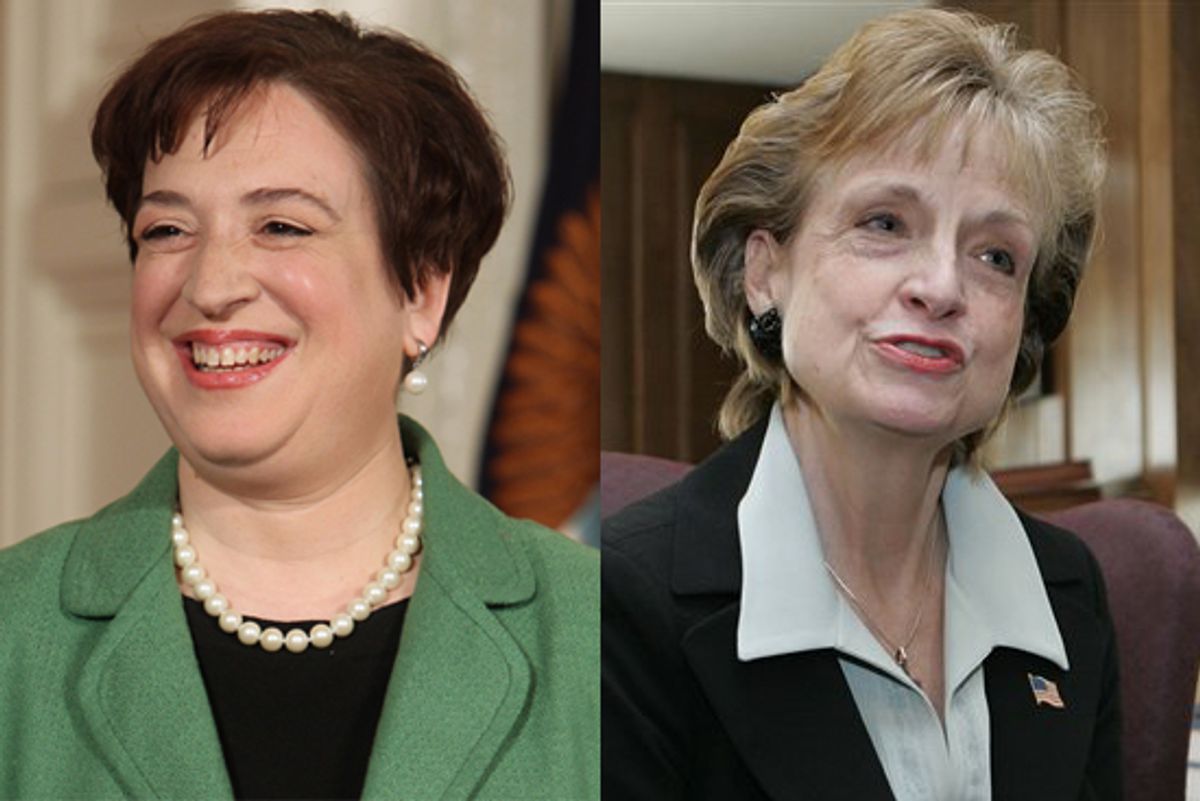 At first glance, you might think President Obama's nomination of Elena Kagan to the Supreme Court is shaping up to be just a replay of the attempt by former President George W. Bush to put Harriet Miers there. Neither of them ever served as judges. And some progressive critics worry that means Kagan will be too moderate, just as some conservatives feared the same thing if Miers was confirmed.

But barring some shocking new disclosure, chances are that's where the similarities end. Elena Kagan simply isn't Obama's Harriet Miers. And the safe bet is she'll be sitting on the Supreme Court when the next term begins in October.

Bush's announcement that he was nominating Miers to the court came at a perilous time for him politically. He picked her in the fall of 2005, right around when Hurricane Katrina shattered any notion that his administration put a premium on competence and qualifications; just as with Michael Brown, the main reason Miers got the nod appeared to be that she was a pal of Dubya's, someone who had worked for him for years and was personally loyal. When Alberto Gonzales moved out of the White House to become Bush's pliant attorney general, Miers had been promoted to White House counsel, and then when the Supreme Court seat opened up, there she was.

But she'd never worked on any constitutional law issues until then. In her private practice, she was a commercial litigator, representing Disney and Microsoft; she also chaired the Texas lottery when Bush was governor there. So not only was there no paper trail to reflect what she thought about big issues that the court would take up, there was no particular reason to think she'd ever thought about them.

Meanwhile, conservatives felt like they'd already been burned once before when a guy named George Bush put someone on the Supreme Court. In 1990, Bush's father had nominated David Souter, whose own lack of a paper trail was seen as an unmitigated positive, after Robert Bork's 1986 nomination fell apart when Democrats picked his wildly conservative judicial record to shreds. Since then, Souter had revealed himself to be ... well, maybe not a liberal in the John Paul Stevens sense, but certainly not a conservative, either.

Add that to Bush's weakened political state -- and the fact that he was, after all, already something of a lame duck -- and the ground was set for a Republican mutiny. Within a few weeks, even GOP allies of the White House were trying to find a way for Miers to step down gracefully. And, instead, the nation got Justice Sam Alito.

With Kagan, progressives certainly may have reason to worry that they don't know whether she'll prove to be a real ally. She's never issued a judicial opinion, and the law review articles she's written don't really dwell on the kind of sweeping legal questions the court is likely to be dealing with in the near future -- limits on presidential power in the context of a so-called war on terrorism, whether corporations have too much influence in American democracy, things like that. "Elena Kagan has spent her career not taking public positions on controversial issues," says University of California at Irvine law school dean Erwin Chemerinsky, a liberal scholar. "What will that mean when she's on the Supreme Court? What kind of justice will that make her?"

What really bothers liberals (who weren't very interested in discussing this on the record on the day the pick was announced) is that Obama probably could have gotten someone who was more openly progressive confirmed. Democrats hold 59 seats in the Senate, but after November, they're virtually certain to have fewer. Kagan, though, has enough support from Republicans that she could probably have gotten on the court even after the elections. The liberal argument boils down to this: Instead of making a bold, assertive choice, the White House went the safe route and asked the left to trust them. (Which it didn't even do all that aggressively; Vice President Biden's chief of staff, Ron Klain, asserted that Kagan is "clearly a progressive," but also called her a pragmatic, and didn't really provide much evidence of her progressive ways.)

Still, that hardly makes Kagan the next Miers. There's no question of her basic proficiency for the job -- she's been serving as solicitor general of the United States since Obama took office, and argued six cases before the court while she was there. She helped shape the administration's entire line of reasoning on questions of constitutional issues. Unlike Miers, who spent her private career litigating, Kagan taught constitutional law and had previously been nominated to an appellate court by former President Bill Clinton; had Republicans not blocked her way, she would have been there for years by now.

Most important, there's absolutely no sign that any Democratic senators are interested in leading a rebellion against the White House over the nomination. "It doesn't appear like anyone's jumping off the bus," one senior Senate Democratic aide says. If a Miers-esque mutiny never materializes, Kagan won't face any trouble no matter what liberals think of her. With an election looming in just six months, no Democratic lawmaker is likely to want to let not one, but two, court fights devour the entire summer; to bring down Kagan, then start the whole process over, would more or less put an end to most other legislative work. In the end, there's probably a reason Obama made a safe pick: He wanted Kagan to have an easy path to the court. And it looks like that's exactly what she'll have.