The progressive comedy can be oddly retro. Could a social network campaign finally result in a same-sex smooch? 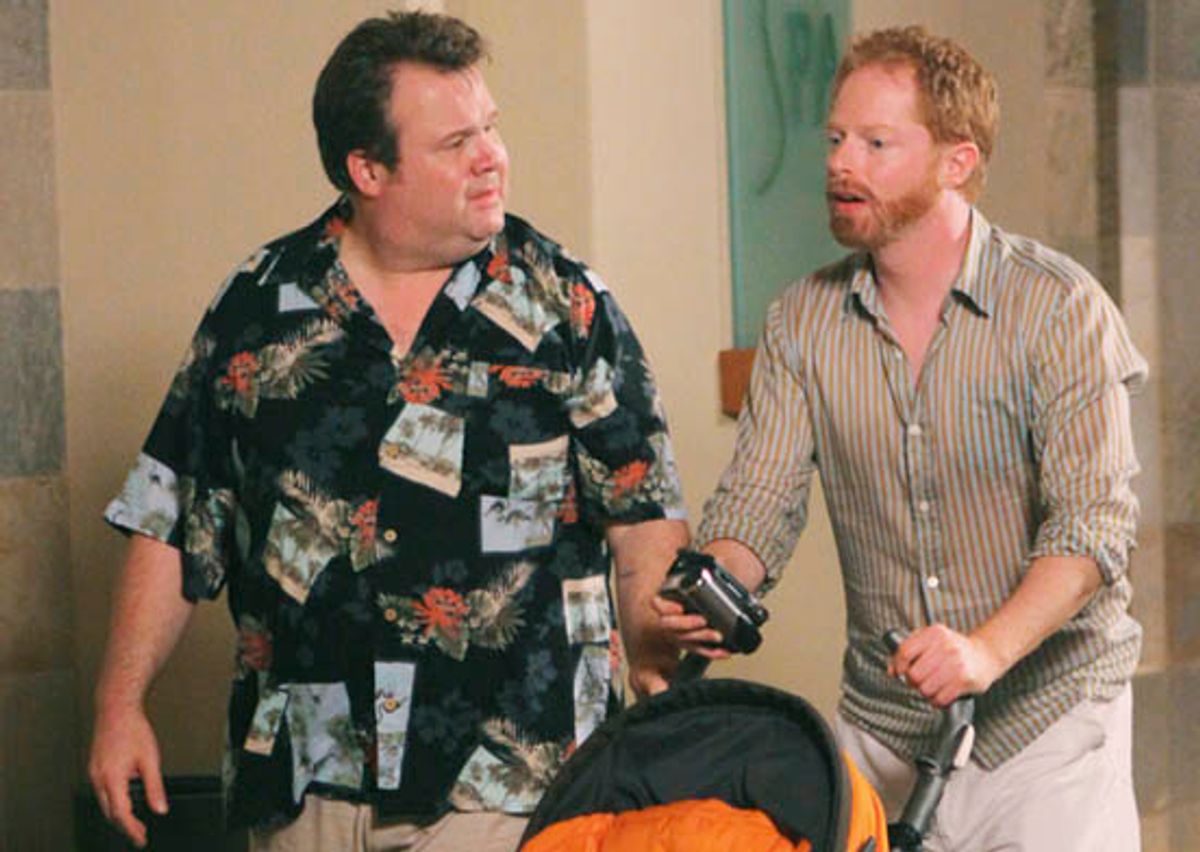 MODERN FAMILY - "Hawaii" - Jay could not be more excited to do nothing but indulge and relax in this tropical paradise, but then an unexpected reality check dampens his plans. Meanwhile, Phil is determined to make this trip romantic for Claire, Mitchell and Cameron have opposing views on whether to sightsee or not to sightsee, and the kids get into a little bit of mischief when left to their own devices, on "Modern Family," WEDNESDAY, MAY 12 (9:00-9:30 p.m., ET), on the ABC Television Network. (ABC/MARIO PEREZ) ERIC STONESTREET, JESSE TYLER FERUSON (Mario Perez)
--

If a small group of thoughtful, dedicated people can get Betty White to host "Saturday Night Live," can they get two dudes to kiss?

Of the few breakout television hits this year, "Modern Family" has proven a critical and ratings darling. But despite the reliably sexed-up relationships between its hetero couples, the show has yet to let the sweetly dysfunctional Cam and Mitchell share a smooch. The point was driven home on last week's episode, when married couple Phil and Claire enjoyed a full-on smackeroo while Claire's brother Mitchell and his partner Cameron chastely hugged. Enter Facebook -- and its latest, crowd-fueled cause: the self-explanatory "Let Cam & Mitchell kiss on Modern Family!" group.

Despite its numerous charms, "Modern Family" is an often maddeningly unprogressive show. Its three interwoven clans all feature a stay-at-home "wife": two attractive women and the drama-queeny Cameron. But if the series is rather retro in its understanding of relationships, the Disney-owned ABC isn't. And the guy-on-guy action on "Desperate Housewives" and "Ugly Betty" indicates the network's not squeamish about a same-sex peck. Maybe that's why when Jesse Tyler Ferguson, who plays Mitchell, was asked on Bravo recently when his character was going to kiss on the show, he unsurprisingly replied, "We get that question a lot, actually."

If Facebook -- and those 4,200 and climbing fans -- are any indication, America can handle a grown-up-style embrace between two people in a committed relationship. And as it happens, the FB campaign comes the same week as the "Great Global Kiss-In" -- a worldwide celebration of public displays of affection in honor of International Day Against Homophobia & Transphobia.

The show only has two remaining episodes this season, but the people have spoken. If the series' producers haven't already shot a Cam-Mitchell smooch, they could do worse with their money than spend it on an affectionate reshoot. Because a kiss is still a kiss, but a "Modern Family" in which a gay couple can't show their love sounds positively backward.