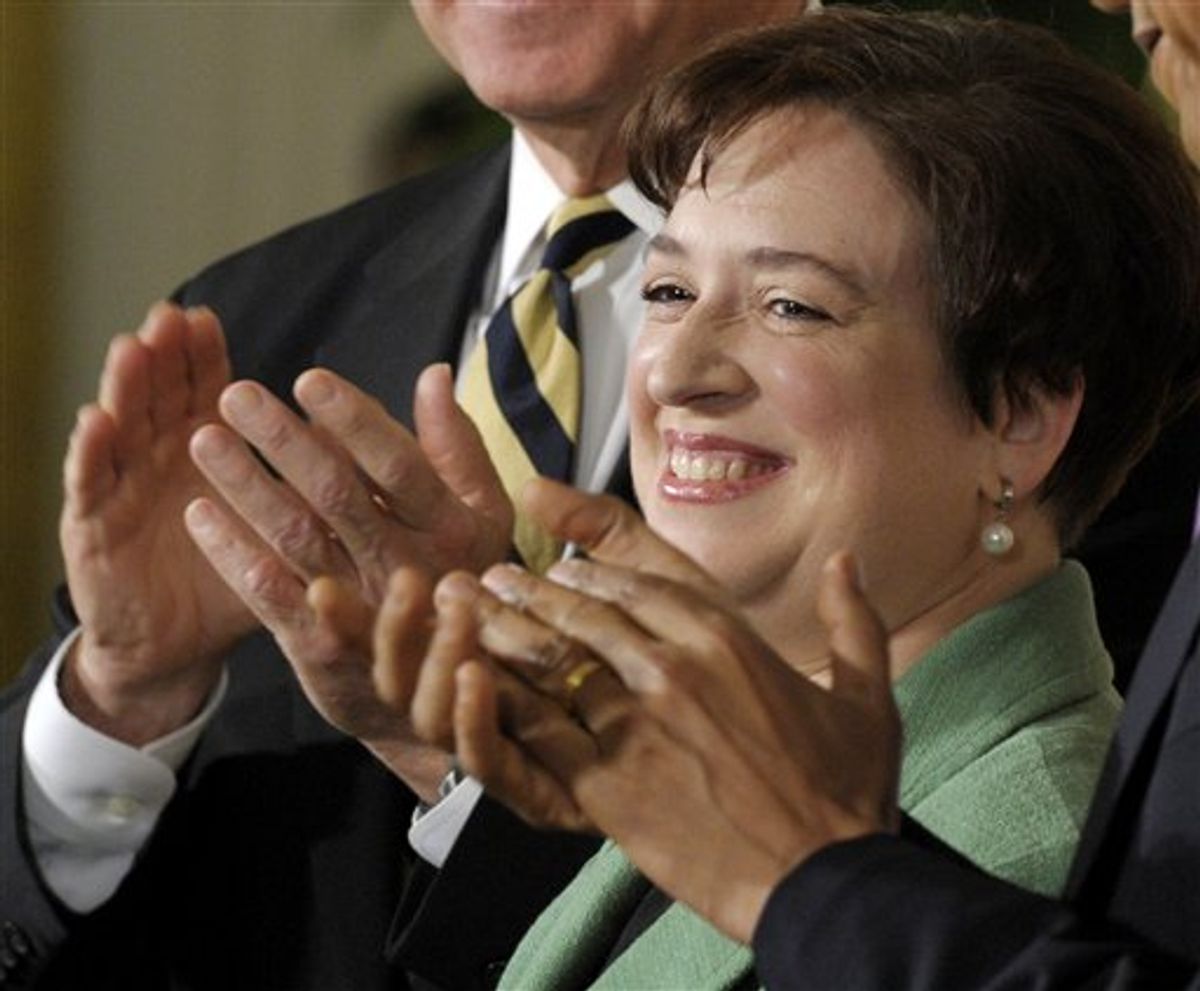 Solicitor General Elena Kagan is applauded by President Barack Obama and Vice President Joe Biden as she is introduced as Obama's nominee for the Supreme Court during an announcement in the East Room of the White House in Washington, Monday, May 10, 2010. (AP Photo/Susan Walsh) (AP)
--

In the post I wrote yesterday after the Kagan announcement, I noted one genuinely encouraging aspect of her record:  in 1995, she rightly excoriated the Supreme Court confirmation process as a "vapid and hollow charade" because nominees refuse to answer any meaningful questions about what they think or believe.  Kagan argued that "it is an embarrassment that Senators do not insist that any nominee reveal what kind of Justice she would make, by disclosing her views on important legal issues."  As I said yesterday, if Kagan adheres to her own views about this during her confirmation hearing, then I -- along with everyone else -- can and should keep an open mind, since we'll finally learn what Elena Kagan actually thinks and believes about things, and can then make an informed and critical judgment about whether she should be on the Court.  The New York Times' Linda Greenhouse made the same point yesterday:  that Kagan's view that nominees must answer such questions is one of the best things about her nomination.

So much for adhering to the standards one imposes on others or feigning even a small amount of intellectual consistency:

The White House Monday said that Supreme Court nominee won't follow her own advice from 1995 in answering questions on specific legal cases or issues, supporting Kagan’s flip flop on the issue that she first made a year ago.

Kagan wrote in 1995 that the confirmation process had become a "charade" because nominees were not answering direct questions, and said they should have to do so.

But during a briefing with reporters in the White House, Ron Klain, a top legal adviser to Vice President Joe Biden who played a key role in helping President Obama choose Kagan, said that she no longer holds this opinion. . . .

"She was asked about it and said that both the passage of time and her perspective as a nominee had given her a new appreciation and respect for the difficulty of being a nominee, and the need to answer questions carefully," Klain said, prompting laughter from a few reporters.

"You will see before the committee that she walks that line in a very appropriate way. She will be forthcoming with the committee. It will be a robust and engaging conversation about the law, but she will obviously also respect the conventions about how far a nominee should or shouldn’t go in answering about specific legal questions," Klain said.

It would be one thing if Kagan had been formulated this view when she were a college sophomore and then re-considered it as her career progressed.  But that's not the case.  In 1995, Kagan was a tenured faculty member of the University of Chicago Law School.  Just last night when I was on The Rachel Maddow Show with Larry Lessig, he claimed that she had established herself by this point as one of the nation's great legal scholars.  Presumably, her contempt for the Supreme Court confirmation process and her demand that nominees forthrightly answer questions about their views of the law was a well thought-out position.  Does anyone, anywhere, believe that her "reversal" is motivated by anything other than a desire to avoid adhering to the standards she tried to impose on others?

What makes this reversal particularly troubling here is that having Kagan answer questions in her confirmation hearing is the only way to learn about who she is, how she thinks, and what kind of Justice she would be.  Given what an absolute blank slate she has made of herself, having her answer questions about prior Court rulings is the only conceivable way for a rational person to make any meaningful judgments about the impact she would have on the Court.  But the "conventions" of the confirmation process -- which she once condemned but now apparently intends to embrace -- are designed to obfuscate rather than illuminate who a nominee really is.  When a nominee is asked whether they agree with past Court decisions, they say their opinion is irrelevant because it's settled law and they will apply it.  When asked about matters the Court hasn't yet decided, the nominee says that they can't give their opinion on cases that might come before the Court.  So, by design, we end up learning absolutely nothing about the nominee's views or approach to the law.

That was the absurd ritual which Kagan rightly condemned in 1995 and demanded be changed.  But now that she's in a position to do so, she suddenly has a change of heart (indeed, her "change of heart" was first announced during her confirmation hearing as Solicitor General).  This is the sort of blatant hypocrisy and intellectual dishonesty that pervades our political process and, more than anything, makes it so rancid and spawns pervasive cynicism.  The views expressed by Beltway mavens are so often a by-product exclusively of self-interest and political advantage, not any actual conviction, and it's not hard for even casual observers to see that.

If Kagan follows through with her refusal to adhere to her own beliefs about a nominee's obligations, think about what that will mean.  Law Professor Jonathan Turley yesterday wrote this:

President Obama has decided to nominate someone who is demonstrably more conservative than the person she is replacing on some issues  -- potentially moving the Court to the right. . . .

For many liberals and civil libertarians, the Kagan nomination is a terrible act of betrayal after the President campaigned so heavily on the issue of the Supreme Court during his campaign. He is now replacing a liberal icon with someone who has testified that she does not believe in core protections for accused individuals in the war on terror. During her confirmation hearing Kagan testified that she believed that anyone suspected of helping finance Al Qaeda should be stripped of protections and held under indefinite detention without a trial — agreeing with the Bush Administration. . . .

In one interesting exchange, Kagan not only states that she believes we are "at war" but agrees that we should have considered ourselves at war since the 1990s . . . . Kagan’s writings (as little as there is) is highly problematic for liberals. . . . For liberals, the problem is her "pragmatic" approach to civil liberties and support for Bush policies. Stevens was the fifth vote in opposing such policies and Kagan could well flip that result. Few could have imagined that voting for Obama would have resulted in moving the Court to the right, but that appears to be case with the selection of Kagan.

For progressives, is that anything to care about?  While Kagan attracts the glowing support of people such as Miguel Estrada and Joe Lieberman, progressive legal scholars continue to raise serious concerns about her apparent support for right-wing executive power theories and her amazing lack of any written record.  Indeed, even as progressive groups reflexively cheer for her nomination without knowing anything meaningful about her, previously unknown evidence about her views continues to emerge.  All this despite the fact that even her hardest-core supporters and long-time friends are incapable of pointing to any of Kagan's beliefs about most of the crucial political and legal issues of the day.

As The New York Times Editorial Page put it today in a truly excellent analysis:

President Obama may know that his new nominee to the Supreme Court, Elena Kagan, shares his thinking on the multitude of issues that face the court and the nation, but the public knows nothing of the kind. Whether by ambitious design or by habit of mind, Ms. Kagan has spent decades carefully husbanding her thoughts and shielding her philosophy from view. Her lack of a clear record on certain issues makes it hard to know whether Mr. Obama has nominated a full-throated counterweight to the court’s increasingly aggressive conservative wing.

And read David Brooks' perceptive column today about Kagan's personality type:  someone who is so driven by a desire for career advancement and to serve institutional power that she basically avoids taking any positions on anything of significance:  "One scans her public speeches looking for a strong opinion, and one comes up empty."

The only antidote for Kagan's deliberate blank-slatism would have been for her to forthrightly answer questions about her legal and Constitutional views during her confirmation hearings.  But now that she's the nominee, she's had a sudden change of heart and decided that such candor is not really advisable after all.  I still genuinely hope she will change her mind yet again and be forthcoming about what she actually believes.  But if she doesn't, we'll witness the truly absurd spectacle of putting someone on a deeply divided Supreme Court for the next 3 or 4 decades -- the last venue that occasionally safeguards core liberties by a fragile 5-4 majority that she could easily obliterate -- without having any clue as to what she thinks about much of anything, all while Democrats and progressives cheer for her as though they're remotely able to know what they're cheering.

UPDATE:  I was on NPR's All Things Considered today to talk about Kagan; that can be heard here: