Elena Kagan is now the Democratic Cause, which means those raising questions about her must be discredited 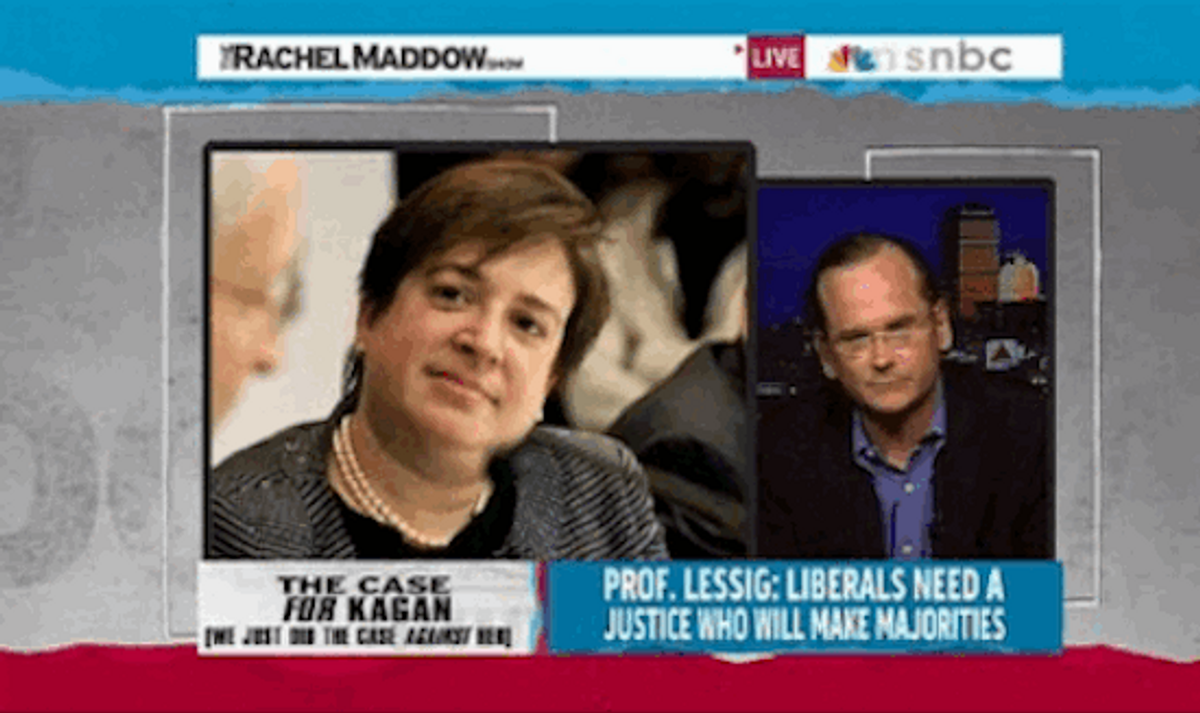 I appeared on The Rachel Maddow Show last night to articulate the case against Elena Kagan, and was then followed by Kagan friend and defender Larry Lessig of Harvard Law School, who spent five minutes (in my absence) trying to discredit me and what I said (video of the two segments is below).  Although I would have preferred an opportunity to address the accusations Lessig was making about me through an interactive exchange, I was glad Rachel presented both sides of the debate.  But there is one serious accusation that Lessig spouted that is so blatantly and inexcusably false that I feel compelled to highlight it, particularly since I was unable to respond last night.  This is what Lessig said when referencing "this work [Kagan] had written when she wrote this piece for the Harvard Law Review" in 2001:

This is another area where Glenn has just flatly misstated the case.  In his piece on Democracy Now [sic] on April 13, he said that in that article, she talked about the power of the President to indefinitely detain anyone around the world.

If I were listening to that and had no familiarity with what I had written, I'd have thought:  Wow, that Glenn Greenwald is either completely dishonest or a total idiot; how can he go around claiming that Kagan's 2001 law review article defended Bush detention policies when it was written before those policies were even implemented and had nothing to do with those policies?  People questioning the Kagan pick obviously have no credibility.  And that, of course, is exactly the impression Lessig's accusation was intended to create.

Except it's totally false.  I've never said, believed or even hinted at any such thing -- let alone "repeatedly asserted" it.  Lessig just made that up out of thin air and, knowing nobody was there to dispute it, unleashed it on national television.  Kagan's comments embracing indefinite detention powers came in her 2008 Solicitor General confirmation hearing when answering Lindsey Graham:  please see Law Professor Jonathan Turley's superb analysis on that exchange.  Her position on detention was expressed there, not in her 2001 Law Review article, and -- contrary to Lessig' inexcusably false accusations -- I never, ever claimed otherwise.  In fact, here is what I wrote about her 2001 law review article in "The Case Against Elena Kagan":

The only other real glimpse into Kagan's judicial philosophy and views of executive power came in a June, 2001 Harvard Law Review article (.pdf), in which she defended Bill Clinton's then-unprecedented attempt to control administrative agencies by expanding a variety of tools of presidential power that were originally created by the Reagan administration (some of which Kagan helped build while working in the Clinton White House), all as a means of overcoming a GOP-controlled Congress.  This view that it is the President rather than Congress with primary control over administrative agencies became known, before it was distorted by the Bush era, as the theory of the "unitary executive." I don't want to over-simplify this issue or draw too much importance from it; what Kagan was defending back then was many universes away from what Bush/Cheney ended up doing, and her defense of Clinton's theories of administrative power was nuanced, complex and explicitly cognizant of the Constitutional questions they might raise.

How can Larry Lessig possibly say on television that I claimed the 2001 Kagan law review article defended Bush's detention powers when I explicitly wrote that the article was about Clinton's domestic policies; that she was discussing the unitary executive theory "before it was distorted by the Bush era"; and that "what Kagan was defending back then was many universes away from what Bush/Cheney ended up doing"?  Let's repeat that:  "what Kagan was defending was many universes away fromwhat Bush/Cheney ended up doing."  I know full well that Kagan's 2001 law review article was about domestic policy and not Bush detention policy -- that's as obvious as 2+2=4 and I've never believed or stated anything close to what Lessig said.  In fact, I explicitly said the opposite.  One has to be completely disconnected from any concerns about factual accuracy to say something like that in light of what I actually wrote.

Worse, compare what I actually said in that April 13 Democracy Now appearance that he cited to what Lessig claimed I said there:

LESSIG, last night:  "In his piece on Democracy Now on April 13, [Glenn] said that in that article, [Kagan] talked about the power of the President to indefinitely detain anyone around the world."

ME, Democracy Now, April 13:  "And what little there is to see comes from her confirmation hearing as Solicitor General and a law review article she wrote in 2001, in which she expressed very robust defenses of executive power, including the power of the president to indefinitely detain anybody around the world as an enemy combatant, based on the Bush-Cheney theory that the entire world is a battlefield and the US is waging a worldwide war."

When describing her views on executive authority and detention power, I explicity cited two sources of information to know Kagan's views:  (1) her 2001 law review article (which did indeed advocacte robust executive authority) and (2) "her confirmation hearing as Solicitor General" (which is where she described her views on detention powers, advocating exactly the view I attributed to her).  To claim, as Lessig did, that I "said that in that article, [Kagan] talked about  the power of the President to indefinitely detain anyone around the world" is blatantly false.  She did that at her confirmation hearing, not in her 2001 article.  If Lessig misread what I said in that one interview, that'd be one thing, but he claimed last night that I've "repeatedly asserted" it.

This isn't the most significant falsehood in the world, but when someone like Larry Lessig launches such an obvious, concerted falsehood about you on television and you have no opportunity then to correct it, you feel compelled to respond.  That's what I'm doing here.  I've had very constructive exchanges with Lessig in the past, still respect him (despite his defense of Obama's violation of his vow to filibuster telecom immunity), and believe his statements last night were the by-product not of malice but of the fact that he's defending a long-time friend of his.  Still, these are the kind of falsehoods that so regularly get spouted in our political discussions.  And what's really going on here, more generally, is clear.

The White House has created a "war room" to attack Kagan critics.  As Politico noted yesterday, the Kagan announcement -- understandably and revealingly so -- prompted "a stronger opposition from the left than the right."  Think about that.  Miguel Estrada, whom Democrats blocked from an appellate court position on the ground that he was a right-wing radical, endorsed Kagan for the Court today.  A separate article details how numerous progressive legal scholars (who have nothing to do with me) have raised very serious concerns about Kagan's glaring lack of a record and what appears to be her support for at least some core right-wing views of executive power (including ones the Obama White House has adopted).

The White House, for obvious reasons, wants to discredit those raising such concerns.  Now that Kagan is Obama's choice, she's the Democratic cause.  The entire Democratic Party machinery -- the ossified DC progressive establishment, the Obama army, her friends from Harvard -- will be devoted to aggressively defending her and attacking her critics.  This whole debate over Kagan has already broken down along clear tribal lines, and any progressive opposing or even questioning Kagan will be seen as a Traitor to the Cause.  And Kagan, having spent the last two decades in academia and as a Democratic official in Washington, has a lot of influential friends.  As Marc Ambinder put it:  "Kagan is part of the club."  She certainly is.

That's all well and good.  Aggressively attacking critics is a normal and inevitable part of the process.  But if the Democratic Party wants to put someone on the Supreme Court for the next 30 to 40 years about whom so little is known -- even ultimate Court sycophant Tom Goldstein said of Kagan:  "The last nominee about whose views we knew so little was David Souter. . . . I don’t know anyone who has had a conversation with her in which she expressed a personal conviction on a question of constitutional law in the past decade" -- then others have not just the right, but the duty, to raise concerns and demand more information.  Trying to discredit those who do that is how party appartchiks function, and that's fine.  But making things up and spouting clear falsehoods definitely isn't.

UPDATE:   Lessig and I have spent the day emailing with one another in order to resolve these disputes (even as the melodramatic FIGHT!! pieces proliferated).  We both essentially agree that the rhetoric and accusations escalated more quickly than either anticipated (or was really warranted), and that this is really just a good faith dispute over an issue (the Kagan nomination) that desperately needs to be aired and debated (and both said so on Twitter).  Lessig has appended a similar note to the response he wrote at TheHuffington Post today, and we're going to do a Bloggingheads session this week to examine these and other issues.