How Robin Hood became a socialist 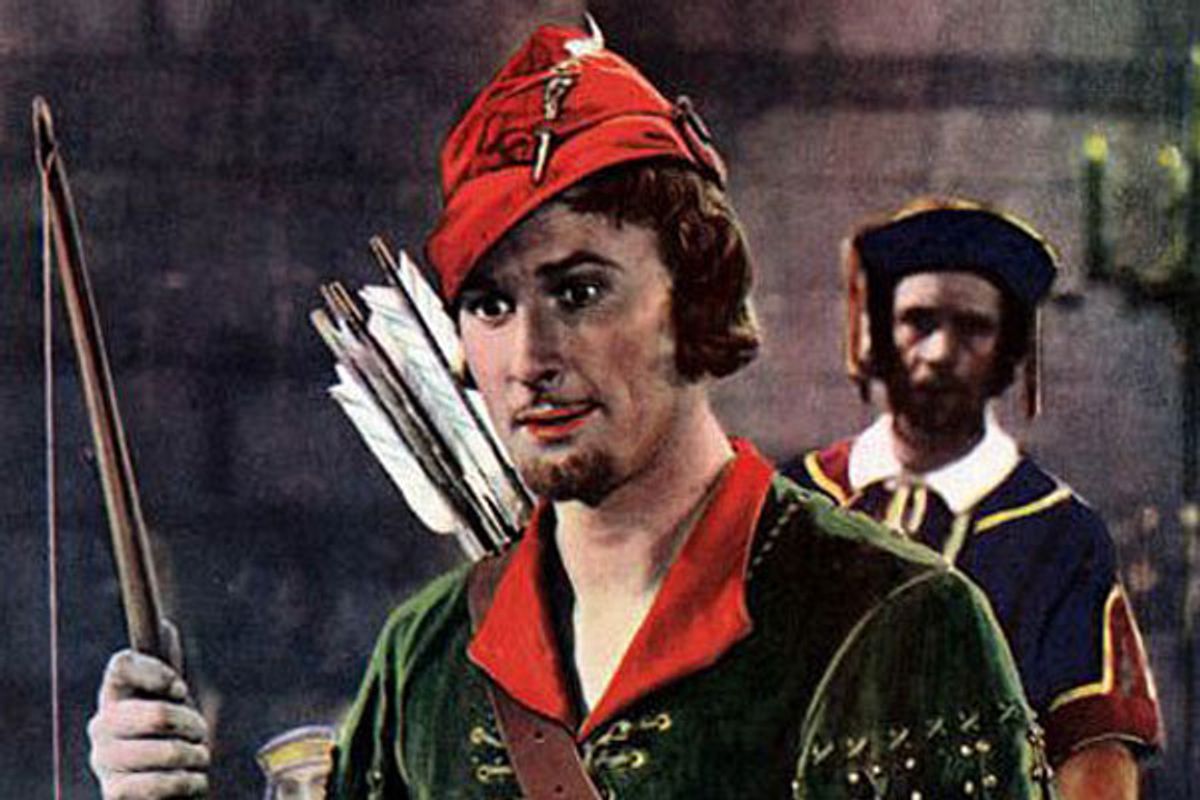 Errol Flynn in "The Adventures of Robin Hood"
--

Ridley Scott's "Robin Hood," starring Russell Crowe as a common archer turned proto-revolutionary and national warrior, will bring no merriness to the month of May. Given Crowe's surly persona, the film affords no capering in the greenwood in the manner of Douglas Fairbanks, no cocky Saxon tricksterism in the vein of Errol Flynn, and mercifully no SoCal modernity in the style of Kevin Costner. In their desire to break with the traditional aura of the English outlaw, Scott, Crowe and writer Brian Helgeland have created a moody war movie redolent of their 2000 Oscar success "Gladiator," that offers a lesson in medieval realpolitik.

The majority of "Robin Hood" movies are much softer than Scott's because violent realism wasn't an existing style at the time they were made. The likes of "Prince of Thieves" (1948), "The Men of Sherwood Forest" (1954), and "Sword of Sherwood Forest" (1960) were hidebound by the merry England clichés that were the rule of thumb in Hollywood and British cinema until Richard Lester's beautifully spare and rugged "Robin and Marian" (1976), with Sean Connery, subverted the storybook visual style.

In all, Robin Hood has featured in around 50 live-action films, 15 TV series and 15 cartoons. Five were made in the early silent period before Allan Dwan's 1922 Douglas Fairbanks vehicle set a benchmark for flamboyance. It's a wildly uneven film, ranging from the monotonously ceremonial to the absurd, with the acrobatic star proving giddy to the point of clownish. Inarguably the one masterpiece in the canon, Michael Curtiz's swashbuckler "The Adventures of Robin Hood" (1938) starring Errol Flynn implied a comparison between Prince John's cruelty toward the Saxon peasants with Nazi atrocities in Europe. However, with its chemically bright Technicolor palette, majestic Erich Korngold score and Flynn's gentrified Robin in sequined Lincoln green, it is wholly artificial, a fantasy extrapolated less from the 15th-century ballads, in which Robin is often brutal, than from 16th-century plays and bucolic Victorian renderings.

Though not without flashes of excitement or, more rarely, political insight, the Robin Hood movies that followed in the next 20 years were stylistically unambitious. But then came clean-cut Richard Greene in TV's "The Adventures of Robin Hood" (1955-58). This remarkable show, which ran for 143 episodes, was produced by a British-based company funded by the CPUSA to provide clandestine work for blacklisted Hollywood screenwriters. Among the 22 who contributed were Ring Lardner Jr., Ian McLellan Hunter, Robert Lees and Waldo Salt, who, working for producer Hannah Weinstein, a "silent" left-wing organizer, sent their scripts pseudonymously from America. The socialistic stories, often based on historical laws and customs, revolved around Robin's efforts to protect the heavily taxed serfs and teach the well-born lessons in humanism.

Not only did the series suggest support for the British welfare state, it created offshore opportunities for its American writers. As Tom Dewe Mathews noted in the Guardian: "Lardner explained that a TV show about an outlaw who takes from the rich to give to the poor provided him 'with plenty of opportunities to comment on issues and institutions in Eisenhower-era America.'" Mathews cites blacklist scholar Steve Neale's discovery that "within the scripts' emphasis on redistribution of wealth there is 'a theme that recurs in the first two series: the probability that Robin Hood or one of the outlaws will be betrayed,'" like the writers themselves.

The Greene series raises the question of what constitutes realism in the Robin Hood firmament. Atmospheric external filmed sequences were intercut with those taped on cramped studio sets, giving an impression of simultaneous verisimilitude and artifice. While it wasn't realistic in the mode of "Robin and Marian" or John Irvin's ribald, pleasingly grimy "Robin Hood" (1991) -- with its caves, huge black pigs, and omnipresent mud -- in the '50s it managed the trick of making the myth itself seem credible, and it was enormously popular. So, too, 30 years on, was Richard Carpenter's haunting "Robin of Sherwood" (1984-86), which, contriving to be lush and gritty, blended the doleful hero's scrappy war of resistance with medieval folklore and necromancy -- far more convincingly than would Costner's "Robin Hood: Prince of Thieves" (1991). Michael Praed and Judi Trott, his red-ringleted Marion, were an idyllically beautiful pair that could have stepped from a Burne-Jones canvas while Praed has been invoked as a "student radical" Robin. But the show had its own solemn integrity -- unlike the BBC's laddish soap-opera version of 2006-09.

One film that went all out for realism and duly disappeared was Johnny Hough's grim and humorless "Wolfshead: The Legend of Robin Hood," which was shot as a never screened 1969 TV pilot and released theatrically in 1973 (and on VHS in the U.S. as "The Legend of Young Robin Hood"). Influenced by "A Gest of Robyn Hode" c.1400-1460, it's set in a bleak Barnsdale terrain and pits yeoman farmer Robin (David Warbeck) against a corrupt landowner and an abbot in a low-level guerrilla war. Jeffrey Richards observed that it was "clearly concerned to be grimly realistic: no fancy hairdos or dinky Lincoln green suits, no scriptwriters' repartee and gaudy, multicolored costumes, no eternally sunny skies and purpose built Hollywood castles. Instead there is Welsh location shooting (damp woods, overcast skies, dark brown soil, mist), genuine weathered castles, dull-colored authentic-looking costumes, and a narrative which includes rape and torture." This sounds like Robin Hood as Ken Loach might have filmed it, except that Loach would have added humor and, in relishing the "rob from the rich" ethos, applied a Marxist critique.

A more likely candidate to make a genuinely revisionist version is another British filmmaker, Shane Meadows, himself from Robin Hood country, who once expressed interest in doing so. However, as Stephen Knight has written, "there is, at least in this myth ... a limit to how much detailed realism the story can accommodate ... The audience knows about cold weather and defeat; the function of the myth is to offer an immediate sense of escape and also a more distant promise of Utopia." Ridley Scott's quasi-realist film may find Utopianism beyond the reach of its bowstring, though, to risk cynicism, one suspects its streamlined violence will hit the bull's-eye again and again.

Graham Fuller has written about movies for the New York Times, Vanity Fair, Film Comment, Sight & Sound, and theartsdesk.com. His website is at inalonelyplace.com.