"For Better": The science of marital unhappiness

Our divorce rate is a myth? Snoring causes breakups? A new book applies rigorous research to the modern marriage 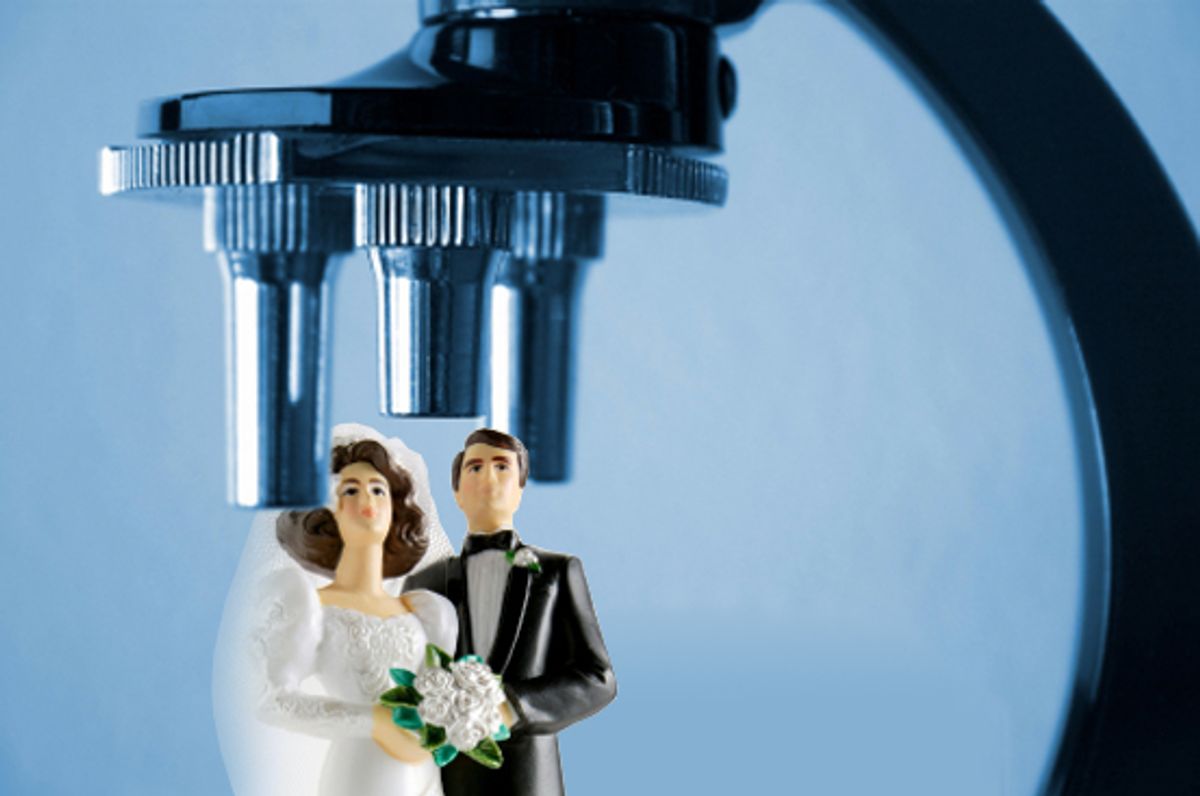 As it turns out, much of what you think about the state of the American marriage is wrong: Half of marriages don’t end in divorce; married people don’t have less sex than their single counterparts and -- surprise! -- fighting can actually be beneficial to your relationship. That is what Tara Parker-Pope, a health journalist and the woman behind the New York Times' Well  blog, discovered while researching her new book, "For Better: The Science of a Good Marriage." In the book, Parker-Pope argues that the marital bond isn't nearly as mysterious as you might believe, and unlike the vast majority of authors on the subject, she uses credible scientific research to back up her claims about everything from sex to housework.

As "For Better" points out, researchers found that couples in lasting marriages have at least five small positive interactions (touching, smiling, paying a compliment) for every negative one (sneering, eye rolling, withdrawal). When the ratio drops, the risk of divorce increases. Snoring and other sleep problems can contribute enormously to marital unhappiness. How you treat your partner during the first three minutes of a fight determines whether the argument will be good or bad for your marriage -- launching a volley of personal criticisms is worse than opening up a discussion with a complaint. It’s these small but recognizable actions, claims Parker-Pope, that distinguish a marriage bound for splitsville from couples who stay together.

Salon called Parker-Pope to talk about the science behind monogamy, our mythical divorce rate and Americans' problem with arranged marriage.

How reliable is science in predicting what makes a good marriage? Isn't  happiness something that is highly variable?

Human behavior is variable, and science can't really predict whether any one individual will be happy in a particular marriage. The scientific study of couples does identify several patterns that are consistently seen in happy and unhappy couples, and statistical analyses can identify specific risk factors for divorce. But in the end, each partner has his or her own definition of what makes a happy marriage. There are some relationships that even science can't explain.

Monogamy isn't normal among other animals, so why should we be trying for something that biology isn't telling us is absolutely necessary?

It's true that monogamy and sexual fidelity are not common in nature, but it certainly does occur. There is no other area of human behavior in which we defer entirely to biology -- if we did that, every woman would have 10 kids. The very essence of human nature is the ability to control our impulses and make choices. Almost without exception, men and women say they value monogamy in relationships. So while it isn't absolutely necessary from a biological standpoint, from a social, cultural and emotional standpoint, it's important to many people and that's why we try for it.

But popular culture must play a large role in feeding this obsession with monogamy.

It doesn't seem to be just cultural. Psychiatrist Michael Liebowitz notes that biologically our brains have evolved two distinct chemical systems for romance: One brings people together and one keeps people together. From an evolutionary standpoint, men and women need to be attracted to each other long enough to reproduce and men need to form enough of an attachment that they stick around to protect and feed the kids.

There really isn't an evolutionary explanation for why humans stick together after children are raised. But even without a biological imperative, monogamy is consistently valued across cultures. Anthropologist Helen Fisher points out that even in most polygamous cultures, fewer than 10 percent of men choose to have more than one wife at a time. She argues that monogamy is "pretty standard" for the human species.

However, there are legal, financial and social benefits in this culture to being married. There are studies that show a difference between the two. If you look at same-sex couples who don't have the right to marry, you definitely see higher breakup rates earlier in the relationship. But once they cross the 10-year mark, or they buy a house together or adopt a child, then you get into a legal commitment. And legal ties definitely do bind us. Being legally entangled with somebody appears to help couples weather storms better than those who can just walk away.

It’s surprising that the oft-cited statistic that half of marriages now end in divorce isn’t actually true. Why do we think divorce is so much more common than it is?

I also think that there's a political agenda on either side of the spectrum. There's the built-in incentive to identify crises. If you're a researcher you can study them; if you're an advocacy group you can get funding and support. There's not a lot to be gained for your cause if you say, "Everything's pretty good right now." That doesn't generate a headline or supporters or grants. You see it in all areas of social sciences, but it’s part of the reason why this crisis of the American marriage has been overstated.

You found the success of a marriage can often be judged by the way the couple retells the story of how they met. How is that?

I was listening to Michelle Obama talk about her first date with the president, and it was fascinating. She remembered an enormous amount of detail, including the flavor of ice cream she had. And you could hear the pronouns were "us" and "we," and there was so much affection in the story. It's not that if you have a bad memory of your first date that you're headed for divorce, but I think it's a useful tool to listen to yourself and your partner, and when you start to hear the negativity creep in, it's a red flag.

I was in marriage counseling at one point and the counselor wanted to hear about our first date, and I thought it was a ridiculous question. I thought we needed to talk about what's happening now, not what happened 20 years ago. And I wish she had stopped to explain that it does matter. Later, I would tell the exact same story and there would be a few little negative fingers in there. There's a big difference between saying, "We got horribly lost on our first date," and, "Of course, you didn't stop to ask for directions." It's the same first date but by the time he's being accused of not getting directions, you can tell that the relationship is going south. You can see that the structure of the relationship has changed.

A lot of people blame problems in their marriage on the notion that women want something other than what men want from a relationship. Are they right?

You look at issues men and women argue about, and it’s true that men care about sex and women care about children. And you think, are we really that separated along gender lines? But when you really look more closely at these relationships you see that a lot of these issues are not about gender, they're about power struggles. You can see evidence of this when you look at same-sex couples. They obviously don't have gender issues, but they do assume various roles and you start to see patterns for power. It's really not about male or female, it's about who has the power in the relationship. If you don't recognize that it's a power struggle then you're never going to get an even playing field.

In many ways, arranged marriages are more scientific than love  marriages. Why are we so shocked by the idea of them?

But aren’t many arranged marriages just as successful as non-arranged ones?

Even in Western cultures, marriage has historically been an economic and social institution, less about love and more about practical considerations, like acquiring wealth or land, joining families, or boosting social and political connections. Those marriages were certainly stable in the sense that they didn't end in divorce. Today couples judge marital quality by a different set of rules. In the 1950s, when men and women were taking on new social and cultural roles, divorce rates began to rise because expectations for marriage changed. Suddenly marriage was less about social worth and more about personal fulfillment. This whole idea of personal fulfillment in marriage is relatively new, and it has certainly gummed up the works. Marriage is a lot more high maintenance when you've married your "soul mate."