"Daria" on DVD: When MTV could actually inspire

Long before the empty narcissists of "Jersey Shore," "Daria" was a ray of hope for difficult, bookish girls 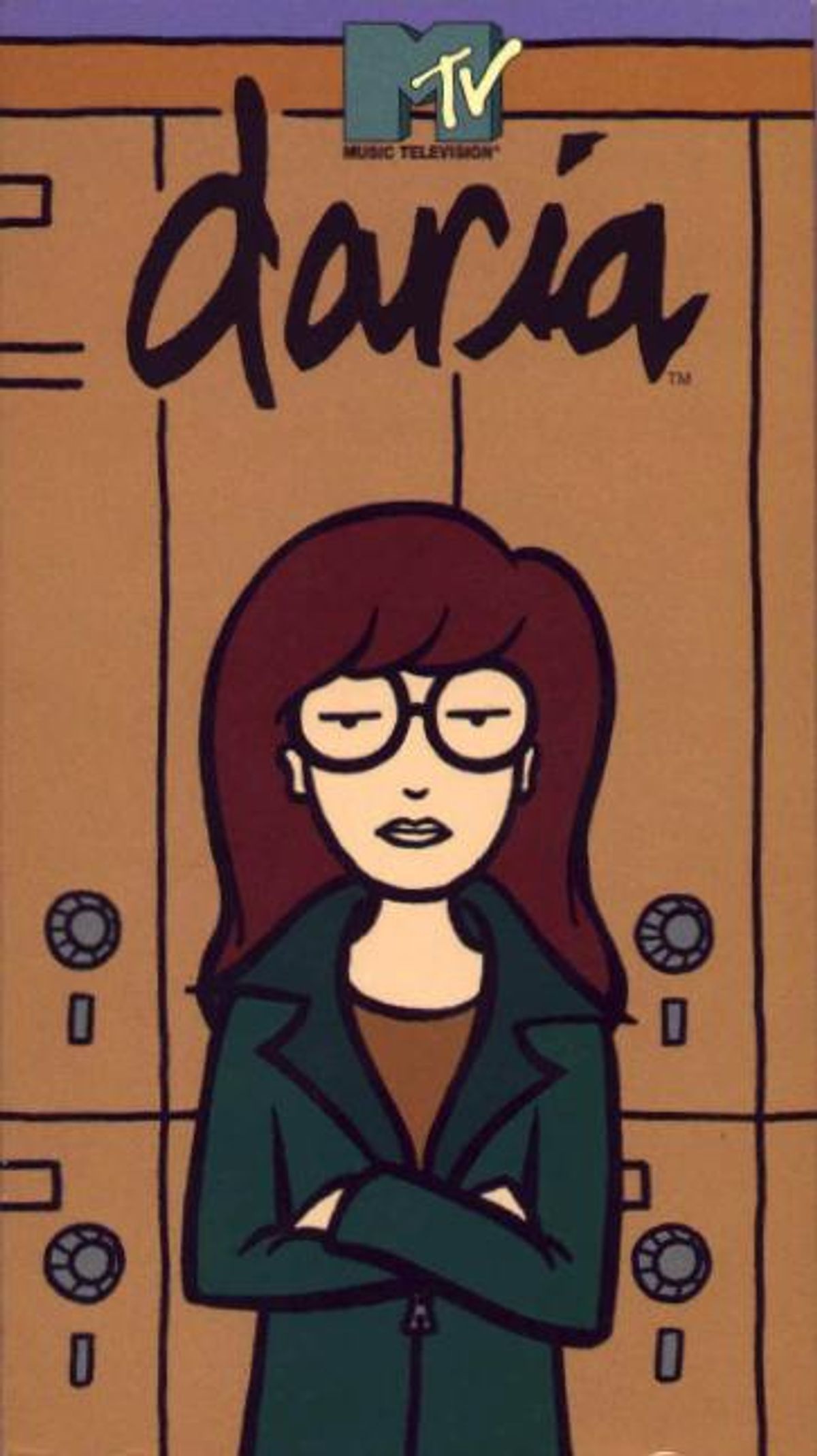 MTV's "Daria: The Complete Series" comes out on DVD this week
--

Nearly 15 years after it debuted on MTV, "Daria: The Complete Animated Series" is finally being released today on DVD. For fans of the disaffected title character, the release marks a much-needed return to Lawndale High School. Set in a mid-Atlantic suburb, the series revolves around Daria and her family, the Morgendorffers. The minutiae of modern life are filtered through Daria's caustic lens, providing moments of apt reflection about the nature of adulthood. At first glance, Daria Morgendorffer appears to be a strange icon to come from the same network that gleefully produced "The Hills," "Laguna Beach," "Jersey Shore" and "My Super Sweet 16." After all, Daria's deadpan delivery and constant cynicism don't exactly fit with the new programming, and her friends are far too multidimensional to be seen on the channel today. Between the eclectic artist Jane Lane and the archetypal high-achieving model minority Jodie Landon (and matching boyfriend Mack), Daria finds backup during the turbulent teen years -- especially while dealing with Beavis and Butt-head clones Kevin and Brittany -- and the machinations of the Lawndale's self-proclaimed fashion police and popular girl squad, the Fashion Club. The series' complex web of teen life is almost impossible to imagine in the demographic-obsessed media market that has emerged since, when so many personalities gracing MTV direct all their contemplative energy toward the nearest tanning bed.

I grew up with "Daria," entering high school during the first season and graduating in 2001, a year before the Daria crew. Through the years post-high school, I've come to the same conclusion as many of the devotees who signed petitions and clamored on message boards for the series' DVD release: "Daria" could have only happened at that time, during that strange, transitional period after the grunge and gangsta rap of the early '90s and before the boy bands and teen queens stepped up to create a glittery pop landscape in the '00s. It spoke directly to those of us on the borderlands between generation X and Y, growing up with the shadows of Kurt Cobain, Tupac and Biggie looming large, who could relate to "The Truth About Cats and Dogs" and "Reality Bites" as well as "The Craft" and "10 Things I Hate About You," who could identify with the screaming discontentment of the 1990s but could also feel the lighter, more hopeful influence of the easygoing and revirginized 2000s.

"Daria" was the rare teen show that understood its audience did not need to be pandered to, that they could tackle major ideas and concepts without a family-friendly filter. (When teen-focused Nickelodeon spinoff The N, now known as Teen Nick, re-aired episodes of "Daria" in 2002, it made the unpopular choice to edit and remove controversial content, resulting in major modifications to storylines.) The only other series to obtain icon status with kids like me was the critically acclaimed but short-lived "My So-Called Life." Other shows during that era were beloved, but only those two had the courage to show adolescence for the messy, insecurity-laden time it truly is. Instead of superficial conflicts between friends, the"Daria" and "MSCL" grappled with dark, dazzling inner lives. These were complicated heroines in complicated times. (And the times, they were complicated indeed: the presidential impeachment trial, the Battle for Seattle.) Normal teen shows position parents as lovable wisdom dispensers, but on "Daria," all characters received at least one opportunity to be seen as three-dimensional human beings, with shortcomings and unrequited desires of their own. And through the world of "Daria," many of us devotees found a lens from which to understand our particular brand of outcast experience, one that carries into our adult lives.

One of my friends, Shani_O of the PostBourgie blog, uses an icon of Jodie as her Twitter pic. While Jodie didn't rack up as much screen time as other members of the "Daria" universe, her predicament was powerful: being a minority in a majority white school, her longing to just be herself rather than a representative of her entire race. A lot of us -- particularly brown viewers -- could relate to many different characters, but it is Jodie's need to be everything to everyone that speaks to us most. As we entered the workforce, we found that the story didn't end in high school, and that those of us who were black would spend our lives proving we were good enough again and again. In the TV movie that served as the series finale, "Is It College Yet," we see Jodie engaged in a battle for her future -- tired of wearing the mask of perfection, she lobbies her rigid father for the right to attend the predominantly black Turner College, where she feels she can finally just be Jodie, and not have to worry about what white people will think. Her father disagrees, believing that a more prestigious (and white) university would be a better choice. Jodie wins the battle -- to spend four years just being herself -- but many of us who had our first taste of the real world understood that for Jodie, this would only be a brief reprieve.

"Daria's" humor was full of sharp one-liners and clever quips, but underneath that was insight about human behavior and even social issues. Here's an exchange from an episode called "Fat Like Me":

Quinn: And the doctors said that Sandy's leg will be in a cast for at least a month! Poor Sandy, crutches don't go with anything!

Daria: That's the same thing those landmine victims are always complaining about.

Rewatching "Daria" episodes now, I'm struck by how much of the satire still rings true. Sandy, Fashion Club overlord and the quintessential mean girl, creates a more stringent admissions test to the club, rolling back the maximum allowable weight by 3 pounds, saying she was alone in taking a stand against "the burgeoning obesity problem tearing apart the very fabric of our land." (Did Sandy provide the template for MeMe Roth?) Later in the episode, Daria and Jane are watching "Sick Sad World" when they announce Hitler's been reincarnated by "a madcap leggy blond." If she exists today, I'm sure that serial cheater and white supremacist-tolerant Jesse James has slept with her. And Quinn's farewell address to the Fashion Club, admonishing the remaining members to let no chartreuse be "too chartreusy," is so full of cutesy made-up words it could have been written by a Lucky staffer. The issues Daria raised were not exactly new; after all, weight drama, racism and ridiculousness in the name of fashion are all American institutions. However, in the '90s, we never thought such empty spectacle would become the norm.

It wasn't just the humor of "Daria" that has held our imaginations for well over a decade, it's also the simple humanity in the stories told. Even during the golden years of Janeane Garofalo, Daria was still a strange and quirky heroine: the designated smart foil to Mike Judge’s cartoon forerunners Beavis and Butt-head. (The show was a spinoff.) Series creator Glenn Eichler (who now writes for "The Colbert Report") and lead writer Anne D. Bernstein (who moved on to other MTV projects and "The Backyardigans") created a world completely separate and populated it with interesting and dynamic teen characters who did not base their lives around dating. This idea should not be novel, but in a media landscape that sees most female characters as sidekicks to more interesting and motivated male characters, an unfriendly intellectual powerhouse like Daria was like a balm for the soul.

As "Daria" began its final season, the writers became even more reflective, looking for ways to probe teenage experience without falling prey to clichés. The penultimate episode, "Boxing Daria," dives into Daria's own insecurities and partially explains how she built her personality fortress in the first place. When the memory arises of a fight between her parents -- caused by Daria's lack of playground social skills -- she lashes out at family and friends for the whole episode before realizing she is most enraged at her self. True to form, the writers of Daria treat these scenes with depth and complexity, having space-cadet-dad Jake chime in to acknowledge that Daria’s maladjustment "was part of the deal. It was the other side to you being so smart and perceptive." It was a poignant moment: Daria's realization that her parents loved her, even if she wasn't always easy to deal with. For some of us viewers -- awkward, intelligent, insecure and, yes, slightly maladjusted -- it was a kind of epiphany. To hear that our quirks weren't just character defects but signs of intelligence was nothing less than monumental.