Ignore critics of regulation who warn of rising pump prices. They are obsessed with the wrong bottom line 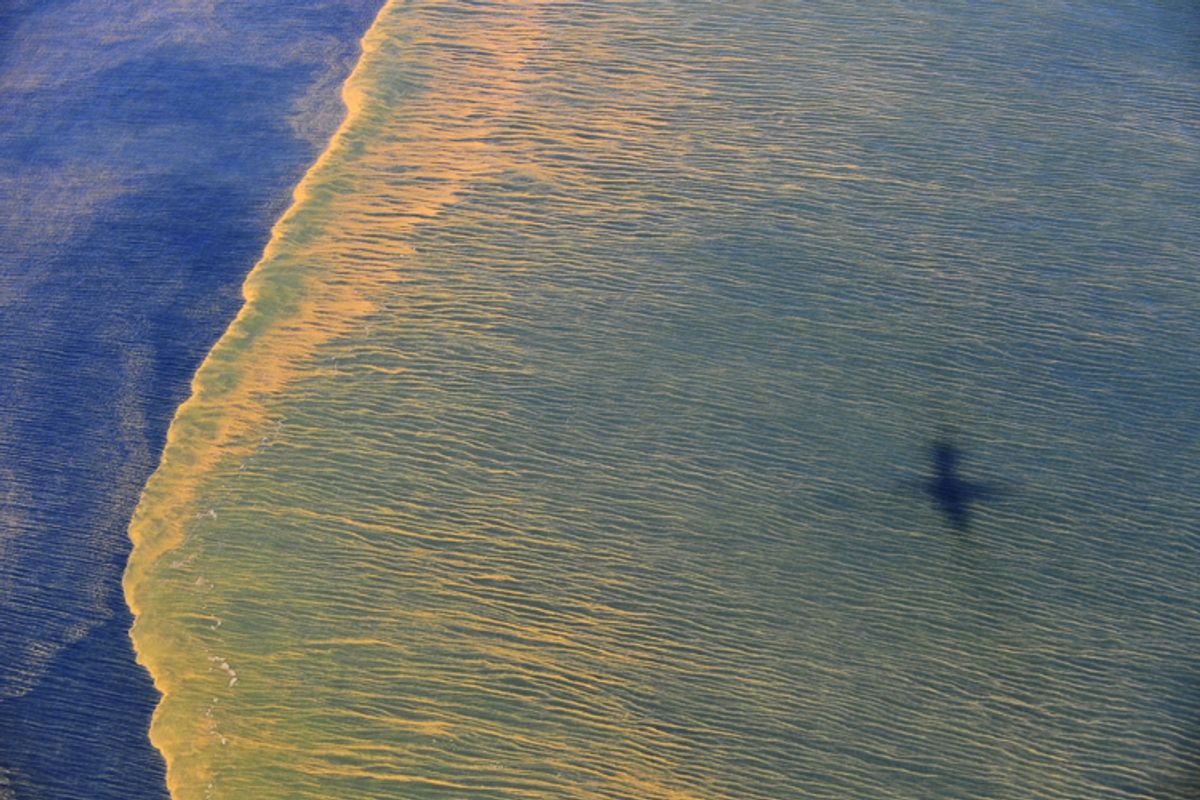 An aerial view of the Deepwater Horizon oil spill off the coast of Mobile, Ala.
--

The International Energy Agency is frightened, reports the Financial Times that "a knee-jerk reaction by regulators, banning new offshore licensing altogether," in response to the Gulf oil spill, will end up increasing costs for the oil industry, and "therefore oil prices."

An opinion piece in the Times by Carl Mortishead further cautions Obama against keeping his boot on the neck of the oil companies, warning that "if he treads too hard, his other boot will land on the neck of Joe Plumber and every American who objects to $3 gasoline." Higher gas prices will encourage Americans to drive fewer miles, which is "not helpful when the world is on a cliff-edge of debt, insolvency and possibly a new recession."

As evidence continues to pile up pointing to a confluence of operational, technological and regulatory failures that conspired together to cause the Deepwater Horizon disaster, it's impressive to see how quickly the clamor advising the White House not to go overboard on offshore regulation has flared up. The parallels with the financial crisis are irresistible: A massive failure of markets and government oversight leads to a disaster, but before the wreckage has even been cleared away, we are told that regulatory overkill will be bad for business.

But focusing only on the bottom line without taking into account the larger picture of what could go wrong -- and what is going wrong -- is exactly how we ended up with a giant Gulf oil slick in the first place. Some terrific reporting in the New Orleans Times-Picayune sheds light on the dispute between BP, Halliburton and Transocean that I highlighted yesterday over whether the cause of the Deepwater Horizon explosion was a result of a bad decision to remove "mud" from the well before placing a final cement plug. According to an eyewitness account by a worker on the rig who witnessed a "heated" argument between BP, Transocean and Halliburton representatives, "[T]he decision was made to displace the heavy mud barrier with water before the final plug was set in order to finish the job more quickly."

In their congressional testimony yesterday, Halliburton and Transocean's representatives said that the order to reverse the normal sequence of events -- put plug in first, and then remove the mud -- could only have come from BP. BP's motivation for finishing the job more quickly isn't hard to figure out. BP was paying Transocean a hefty $500,000 a day for the rig's services. The implication seems clear: A desire to cut costs led to a bad operational decision with enormously catastrophic consequences.

Stronger government oversight -- including stricter rules on allowable operational procedures -- might have made a difference. But the more important lesson is that to allow policy to be directed by blind adherence to short-term price signals is a dumb way to run a business -- or a country, or a planet. Sure, there will always be political pain when gas prices spike, but the answer to that problem is not to let the oil industry regulate itself, or abandon any attempt at climate change legislation. The answer is to better match the risks with the reward. The result of the Deepwater Horizon oil spill will undoubtedly entail tighter, more aggressive regulation of offshore oil drilling operations in U.S. waters. Such regulations, including a potential ban on new leases, might contribute to higher oil prices. But higher oil prices, ultimately, will also be the single most powerful force pushing investment into alternative, cleaner sources of energy. The critical job for government is to manage that process, to ensure that prices do not spike too quickly and crush economic growth. This is not a job that can be left to the market. The market is built to boom and bust -- the market will push at the technological frontier without restraint. Government's job is to exercise restraint.

How could prices be managed? One option would be a cap-and-trade mechanism that would properly incorporate the environmental costs of fossil fuels into the production process. Global temperatures rise too fast -- tighten the cap. Energy costs spike out of control -- loosen the cap. Other options are a carbon tax or a gasoline tax. Yes, in every case, the price of gas rises, but if implemented correctly, it rises in a managed fashion that helps the world transition to a new energy economy in a safe and orderly manner.