As "Glee's" creator calls for a Newsweek boycott after a controversial article, we wonder: Could the mag be right? 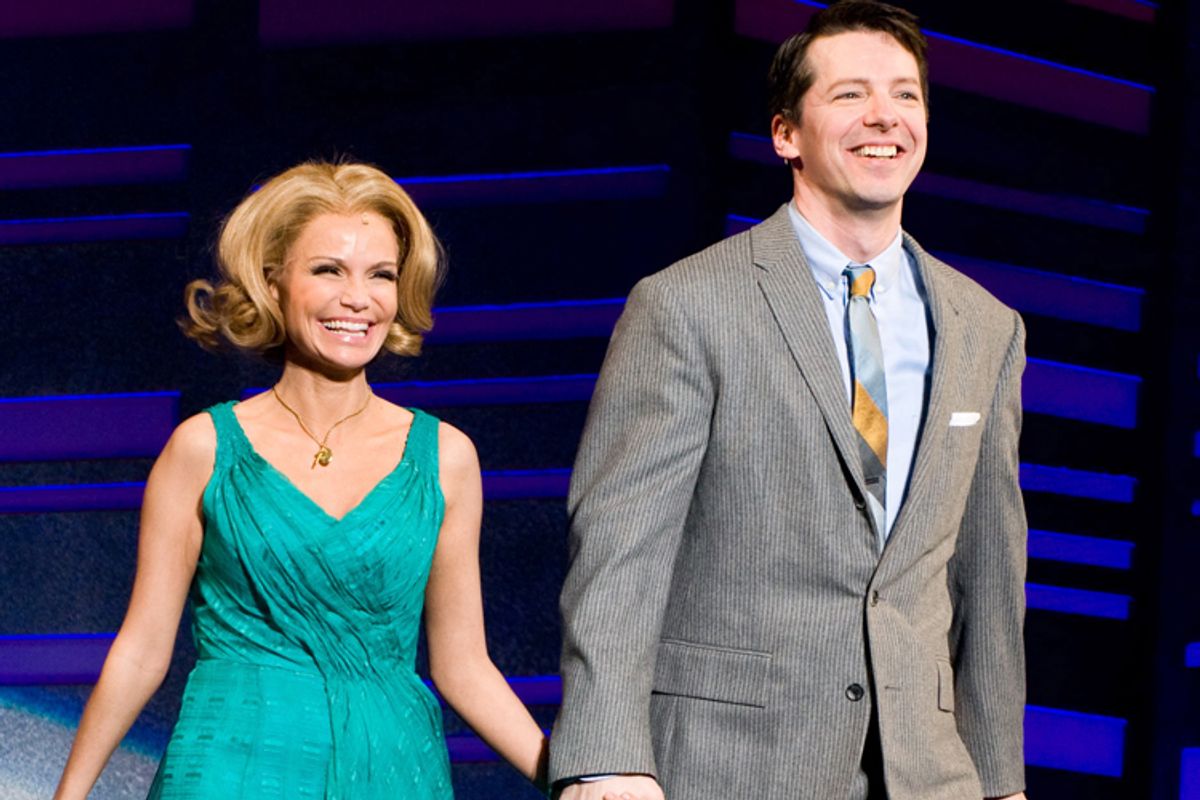 Sean Hayes and Kristin Chenoweth appear for the curtain call at the opening night performance of the Broadway musical "Promises, Promises" on April 25.
--

Chances are you've heard about a recent Newsweek article by Ramin Setoodeh in which he claims there's something about openly gay performers like "Promises, Promises" star Sean Hayes and "Glee's" Jonathan Groff in hetero roles that's "weird" and "feels off."

The story prompted a torrent of outrage, notably from Hayes' Broadway costar, Kristin Chenoweth, who penned a lengthy rebuttal to the "horrendously homophobic" piece. "We’re actors first," she wrote, "whether we’re playing prostitutes, baseball players, or the Lion King ... No one needs to see a bigoted, factually inaccurate article that tells people who deviate from heterosexual norms that they can't be open about who they are and still achieve their dreams." And now "Glee" co-creator Ryan Murphy is calling for a boycott of Newsweek (a troubled magazine that recently went up for sale, by the way), describing the article "as misguided as it is shocking and hurtful" and "damaging, needlessly cruel, and mind-blowingly bigoted."

This clearly wasn't the response Setoodeh had bargained for. On Sunday he lobbed back his own response to the controversy, kvetching that "The Internet is attacking me" and claiming that he was "hoping to start a dialogue that would be thoughtful." Oh, and here's the kicker – Setoodeh is gay.

Setoodeh says the "point" of his original story was to ponder, "If an actor of the stature of George Clooney came out of the closet today, would we still accept him as a heterosexual leading man? It's hard to say, because no actor like that exists. I meant to open a debate -- why is that?"

Well, considering that Setoodeh himself calls Hayes' Tony award-nominated performance "wooden and insincere" and Groff's "more like your average theater queen," he seems to have answered his own question. "We" would not accept a gay actor as a hetero leading man because Setoodeh can't. The writer is certainly entitled to state that he believes "an actor's background does affect how we see his or her performance." He's also right to question why there aren't more openly gay performers on the A-list, musing, "When was the last time you saw a movie starring a gay actor?"

But Setoodeh doesn't seem to have a problem when the tables are turned. Instead, he breezily notes that while it's "OK for straight actors to play gay ... it's rare for someone to pull off the trick in reverse." In other words, Kelsey Grammer's campy turn in "La Cage Aux Folles" and Eric Stonestreet's on "Modern Family" are okey-dokey; Hayes' and Groff's straight performances aren't. But television's Neil Patrick Harris and Portia De Rossi? They're just "broad caricatures, not realistic characters." "Sex and the City's" Cynthia Nixon? "Married to a man when she originated Miranda."

What's that, you say? You have no problem forgetting an actor's personal life for the duration of a movie or a television program? You thought Neil Patrick Harris made a beautifully heartsick hetero in "Dr. Horrible"? You didn't give a toss about the sexual orientation of Ian McKellen's Gandalf' or Magneto? You don't get that raging lesbian subtext from Sara Gilbert on "The Big Bang Theory"? Sorry, you're wrong. Ramin Setoodeh says it "doesn't work."

Frankly, I had a far harder time swallowing the notion that straight Hugh Grant could bear the sight of Sarah Jessica Parker in "Did You Hear About the Morgans?" than I've ever had buying the openly gay John Barrowman as Drea de Matteo's ex on "Desperate Housewives." It's called acting. And if Setoodeh stubbornly insists the magic doesn't work on him, so be it. But it's the height of arrogance to suggest, as he does, that gay actors somehow lack the skill and talent to convincingly play straight characters. That, Setoodeh, is why the story's been called "homophobic" -- it's all those sweeping generalizations applied selectively to one group.

It's not about the performer's personal life. It's what he or she brings to the role.  The maddening thing about Setoodeh's story -- and the reason for all the anger -- is that he assumes his own failure of imagination is everybody else's problem.