GOP wants to cut federal budget, .16 percent at a time

Rep. Eric Cantor proposes a gimmicky way for the public to stop a tiny, tiny bit of federal spending 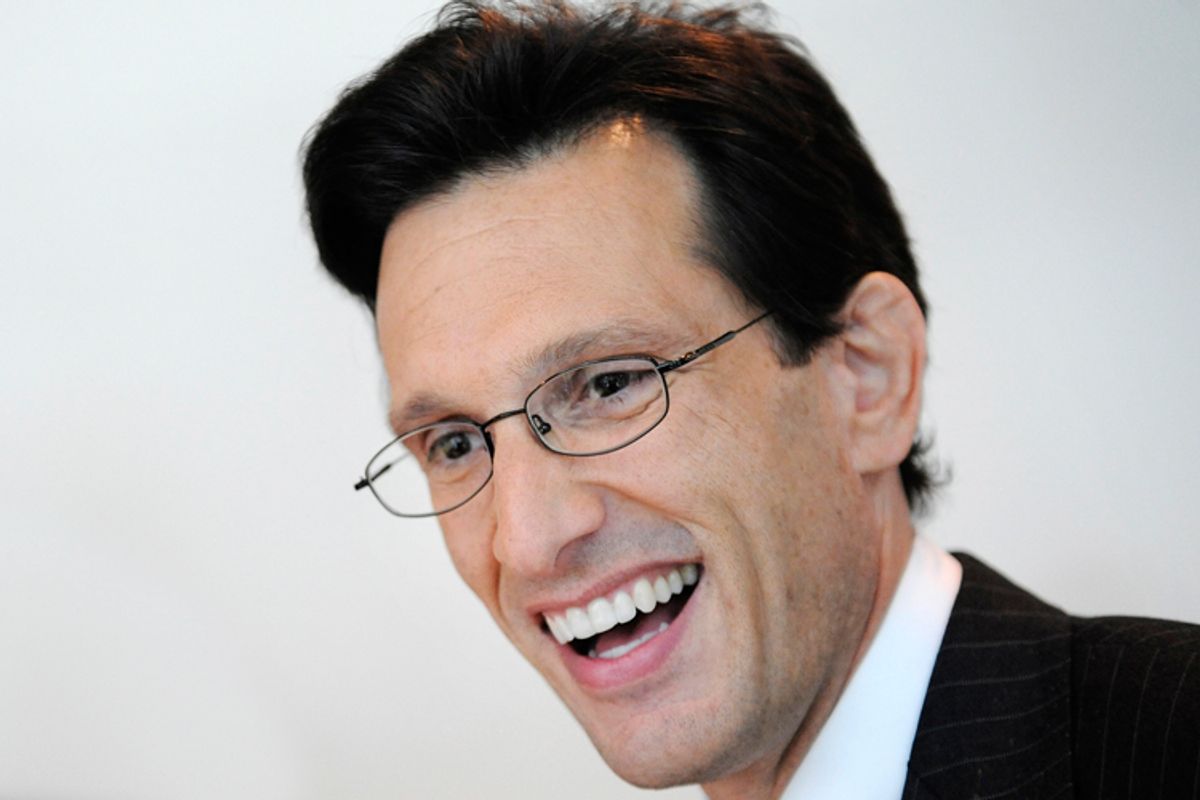 Eric Cantor has a reputation as being one of the idea guys in the Republican Party, and the one he unveiled Wednesday was, at first glance, pretty smart.

"Today, we are launching YouCut -- a first-of-its-kind project designed to defeat the permissive culture of runaway spending in Congress," Cantor announced. "It allows YOU to vote, both online and on your cell phone, on spending cuts that you want to see the House -- YOUR HOUSE -- enact. That's right, instead of Washington telling YOU how THEY will spend YOUR money, YOU can tell THEM how to save it." (And yes, all those CAPITAL LETTERS were in the blog post Cantor published on Andrew Breitbart's BigGovernment.com to promote the idea.)

The gist is pretty simple. Go to Cantor's new Web site, and every week, you can vote for a federal program you want cut. And whichever one wins, the GOP will... well, the GOP basically won't do anything about it, because -- at least until November -- they don't control the House. But they'll call for an up-or-down vote on eliminating the program.

The only problem is that the proposed cuts don't add up to very much. (One program, a Department of Housing and Urban Development grant that awards money to Ph.D. students working on urban issues, only costs $200,000 a year.) The proposed federal budget next year is more than $3.8 trillion; if every single one of the programs Cantor put up for voting this week was eliminated, that would save a little less than $6 billion. Which is a lot of money, but only about .16 percent of the total.

And in fact, leading House Republicans have issued very excited press releases about spending projects that cost more, in some cases, than the programs Cantor wanted to cut. Rep. Mike Pence, R-Ind., for instance, was happy to take credit for $3.7 million in grants the Federal Aviation Administration is sending to the Randolph County Airport in Winchester, Ind. But that kind of money could keep doctoral students living high off the HUD hog for nearly 15 years. (Well, not that high on the hog; the HUD program provides $25,000 stipends annually to each recipient.)

Cantor spokesman Brad Dayspring says members can nominate projects, or the public can send ideas in. And he mocked Democrats for pointing out how little actual money the YouCut program would save. But when I asked him Wednesday what would happen if someone proposed cutting, say, Pence's airport grant, he didn't reply.

Which belies the real point of YouCut: to make it look like Republicans are being responsive to voter anger over federal spending. Just like John McCain spent the 2008 election railing about earmarks (when things like, say, the Pentagon cost far more money), the GOP can make some political hay out of minor programs that sound silly. And when Democrats don't let them cut the programs, Republicans will have a nice campaign issue to talk about. After all, they need something else to highlight in between their calls for massive -- and expensive! -- tax cuts.

Update: Cantor spokesman Brad Dayspring sent along the following after this post went up: "Since the DNC is now on record noting how small these common-sense spending cuts are, we presume that Democrat members – starting with Speaker Pelosi – should have no problem allowing a full debate on each measure selected by the American people. Heck, perhaps a few Democrats might actually vote for a spending cut."