Is it possible to dine out politely with kids?

Going to restaurants with children can be like target practice for dirty looks, but you can dodge and deflect 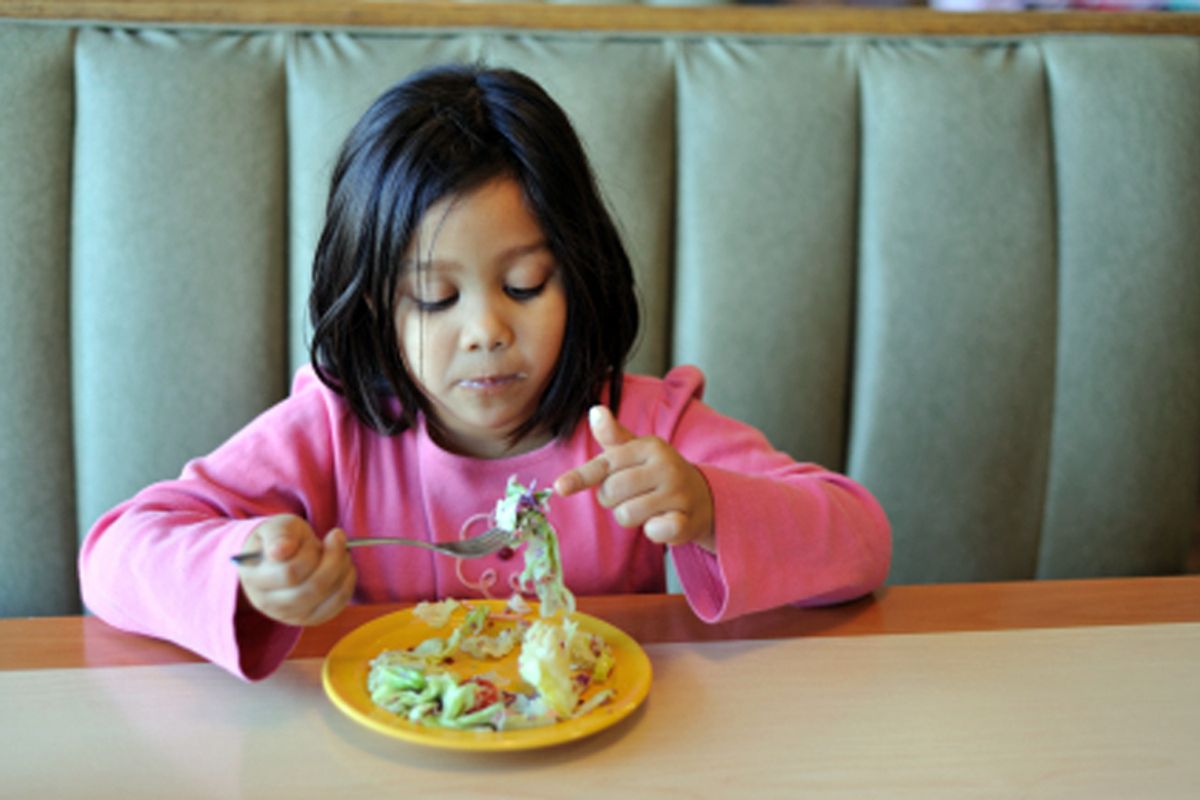 Is there any hatred more vile and seething than that reserved for parents and young children by people not in the mood? In cities, particularly, it becomes turf war: small spaces and bulky bourgie baby-care accoutrements really don't mix. I love kids (Hi, Peanut!), but there is a dark chamber of even my heart that opens up when I'm in a hurry and the entire sidewalk is taken up by a double-wide stroller. And nowhere are the battle lines more drawn than in restaurants.

"The first warning is when you see the parents enter the restaurant with a stroller the size of a KIA. From there they will ensure that no one enjoys their dinner until after they're gone. I sincerely think it's intentional," a commenter on Serious Eats replied to a poll on whether children should be allowed in high-end restaurants. Granted, this commenter calls him/herself "Leper," so there may be something else going on psychologically there, but that level of animosity, resentment and contempt is not out of range for what I hear uttered about parents with kids at tables.

And then I heard recently of a stylish cafe in a particularly baby-happy part of town that instituted a no-stroller policy. Not a particularly welcoming gesture, but hearing young parents in the neighborhood talk about it, it wasn't just an annoyance, it was a declaration of class, race and gender war all rolled into one, almost as evil as anything to do with Dick Cheney. (Welcome to Brooklyn: now featuring nearly as many babies as writers named Jonathan!)

But, happily, there are peaceable ways of dealing with the dining tension of the have-babies and have-nots. Writing yesterday in Fat City, Jonathan Bender details his ground rules for taking kids to restaurants. Adapted from the rules you see around swimming pools, they're a strong way to declare a truce with baby-haters and still get to enjoy himself at dinner with his children:

5 to 6 p.m. is open swim. The first hour should be a mulligan. It's typically easier to feed kids earlier, and this leaves the rest of the evening to the general populace. We could even have a transitional half-hour from 6 to 6:30 p.m.

No running allowed. The table is home base and the home is where the family stays for the meal. Trips to the bathroom are fine, but otherwise we are all sitting in our seats for the duration of dinner.

Three whistles, clear the pool. If my table gets three strikes, we're out of there. Food on the ground -- we'll call this one the automatic strike -- a mild screaming fit, and talking to someone else's table are all examples. The potential list of fouls would be agreed upon before dinner commences.

For more thoughts and tips, I called the ribald and always interesting Robert Sietsema, the intrepid restaurant critic of the Village Voice, who may well have dined in every restaurant from high to low in New York, and who's been eating out professionally for nearly 20 years.

So what's your take on kids in restaurants?

I've been taking my daughter out to restaurants her entire life. I believe short of actual screaming babies -- and Upper West Side kids, who are more obnoxious than any other kids -- most kids tend to be pretty well behaved in restaurants. You know, they really take their cues from their parents, and in my experience, there are much more obnoxious adults in restaurants than kids. Children in restaurants don't bother me, because I care about the next generation, and a screaming baby doesn't annoy me nearly as much as hearing an adult bitch at the waitress, or having ostentatious conversations about stock trades or their sex life.

You know, the whole discussion is always centered on the annoying brats, who are a small minority. Kids who need to act out are acting out because they're not getting attention at home, or because the parents aren't thinking about where they're taking their kids appropriately. You don't take your kid to Per Se because you'll be eating a four-hour meal. The kid is not going to sit there all night and admire the intricacies of the bread service.

C'mon, Robert. There has to be something that annoys you about going out with kids.

OK, I do hate those new strollers. In all of these hip neighborhoods, there is tension between the unmarried who want to go out and the parents who want to show off their kids and their hardware. When we had Tracy, we had two strollers -- one for long distances, and cheap one that folds up to nothing.

As a parent, there's so much you can do to consider the feelings of other diners. If for some reason the kid starts to act out, you take the kid out for a walk. If you think you're annoying the other diners, you just leave, and you have to be prepared to do that. And you have to choose the right place to take your kids.

How do you choose what would be an appropriate place for kids?

With some frequency, I take kids out when reviewing because I want to see how the restaurant reacts. In my experience, at Asian restaurants, especially Chinese and Japanese, the staff often willingly indulge the children. Though obviously it's not just Asian restaurants. Loving families will choose restaurants where families and children are welcome.

There is a class of restaurants that are inappropriate for kids: ones where you can't eat in under an hour. Even adults get antsy.

Pick a place that has food the kid likes, but encourage and let them explore. Fuck the kids meal, with its stupid chicken nuggets, if the restaurant doesn't normally sell that food. You know, go by the old rule with your kids: "You don't have to eat it if you don't want, but you have to taste it." That's how they learn. All the time, I'm with parents pre-scanning the menu, "Oh, he won't like this, he won't like that." I take them aside and say, "Oh, why don't we experiment? The kid's hungry. Let's order all this food. He's not going to know what any of this shit is! Let's just see what happens." Nine times out of 10, the kid will look around, make his own decisions for the first time in his life, and find stuff he likes, even if it's just to spite his parents!

A couple of years ago, we were at a Lebanese restaurant, and the parents were like, "Oh, he won't like..." again. And then out came a big old plate of lamb testicles. They were really cute, they looked like little almonds, grilled, and they smelled terrific. And the kid just went to town on those balls! The parents were like, "Ewww," but the kid will explore out of sheer native curiosity. Parents are much more responsible for bad eating behavior than the kids.

Then again, after dinner, we worried that years later the kid would be detailing the abuse in court: "They made me eat testicles."

What are your tips on how to dine out with children? Let us know in the comments!