The pretzel gets a new twist

First came tacos and hot dogs. Now the salty favorite is the latest street food to get an upscale makeover 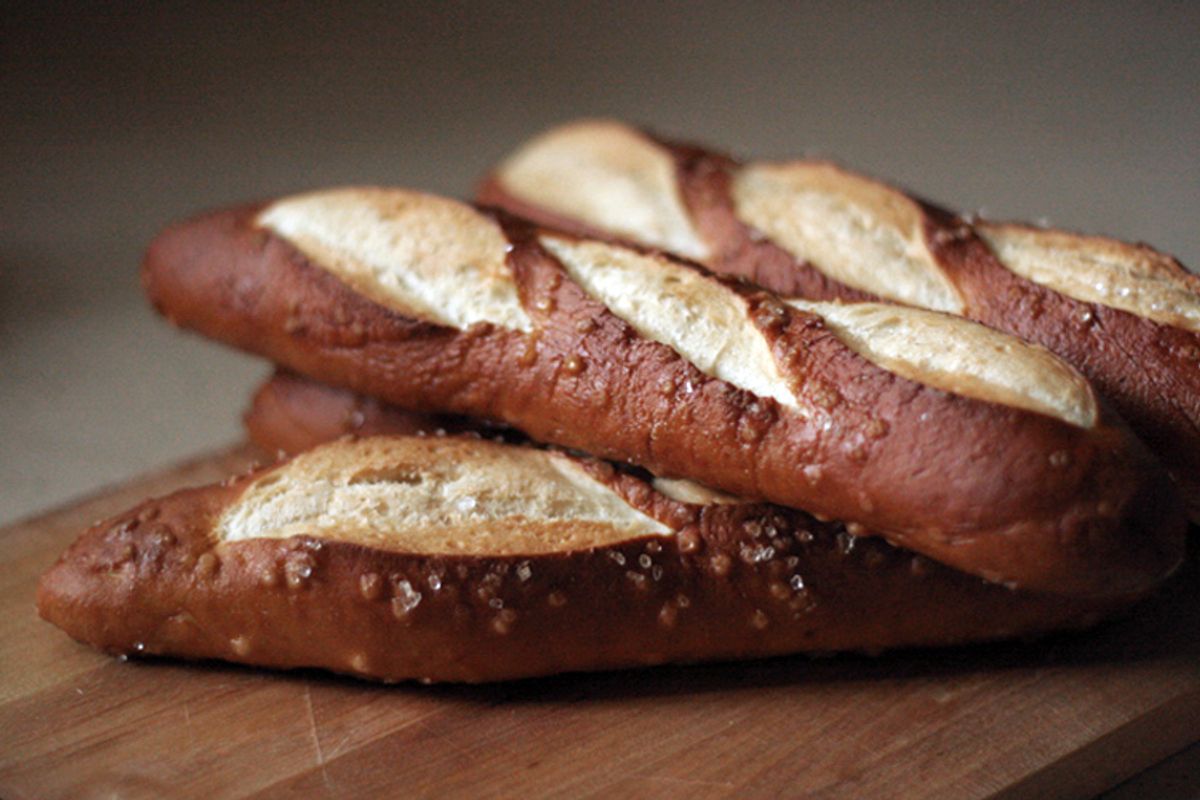 I know it's only been a few short weeks since we all celebrated National Pretzel Day (you probably haven't even had time to take down your decorations), but here's a good reason to keep the excitement going: The salty treat is finally getting an upscale makeover. Pretzel dough has been traditionally used to make, well, pretzels, but in recent months it's increasingly been popping up in unfamiliar shapes -- braids, twists and knots -- in upscale bakeries and restaurants around the country.

Most soft, chewy pretzels are made from wheat flour, water and yeast, dipped in lye and sprinkled in salt. But recipes can vary immensely, depending on how elaborate you'd like to go -- Jeffrey Hamelman's book, "Bread: A Baker's Book of Techniques and Recipes," calls for fermentation, pate fermente (in which finished dough is mixed in with unfinished dough) and a bath of water and lye (requiring goggles). But newer pretzel offerings are increasingly straying from the straighforward formula, with flavors like Gruyère paprika and jalapeño cheddar (both of which are available at New York's Sigmund pretzel shop).

The pretzel has been around in some form for more than a thousand years, but the lye pretzel (which is now most common) has been around since the 19th century, when, supposedly, a German baker accidentally dropped some baked goods in a vat of lye, and became entranced by their new flavor and color. Germans have long been using pretzel dough to make buns and breads  and baked goods in non-traditional shapes -- but in the U.S, when most of us think of pretzels, we generally imagine the soft and chewy New York street food variety, or the small crunchy kind that nearly killed a certain ex-president.

The pretzel resurgence likely began at the start of the decade, partly as a result of the upscale salt trend, but in the last few weeks the New York Times' T Magazine noted a new "explosion of artisanal twists and braids" made of pretzel dough in New York restaurants. This ranges from upscale chocolate-covered pretzel at Prime Meats, Gruyère and butter-filled pretzel bread at Almondine, and ham and brie pretzel knots at Café Pedlar. The Blimpie restaurant chain recently introduced pretzel bread for its sandwiches. Last month, the Culinary Institute of America's Tom Vaccaro told the Associated Press that the pretzel is "almost in that trend phase where you're seeing it almost everywhere," and some bakeries are even selling pretzel baguettes. Now the M&M's are getting into it: Its newest flavor? Pretzel!

The popularity of pretzel dough, like the recent popularity of macaroni and cheese and cupcakes, is likely tied to the food industry's penchant for taking comfort food items and giving them a slightly upscale makeover. Most of us associate pretzels with street food and a homey, middle- and working-class Americana -- best eaten in places like Coney Island, or the county fair, or while drunk at 2 a.m. in a New York City cab. During times of economic turmoil, these new takes on the pretzel offer consumers a familiar item in a slightly unfamiliar shape, a kind of nonthreatening exoticism.

Alas, doughy things (even in unexpected shapes) don't quite have the exciting kick of something like cake balls or Sichuan buttons. Some might be entranced by knots and braids, but when it comes to sandwiches, most Americans care more about what's inside it than what it's made with.