"Letters to Juliet": Predictable, but easy to love

Everything about this sweet Amanda Seyfried romantic comedy is formulaic. Really, is that such a bad thing? 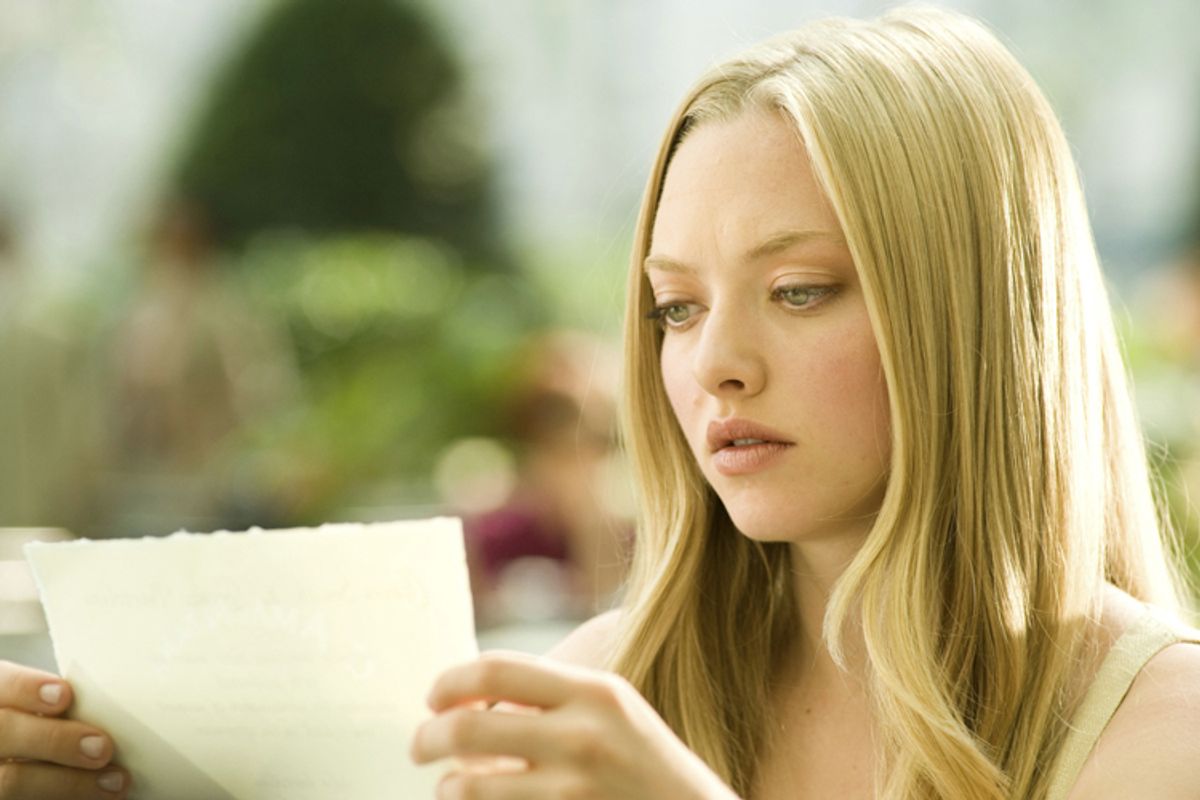 Amanda Seyfried in "Letters to Juliet"
--

"Letters to Juliet" is a by-the-numbers romantic comedy -- and I mean that in a good way. Sure, the story merely puts attractive, likable people in a pretty setting and lets love take its course. But lordy, that is a breathtakingly refreshing change from the spate of recent rom-coms hell-bent on delivering flinty females and douchebag dudes in situations that require lots of yelling.

In contrast, "Letters" gives us the radiant Amanda Seyfried as Sophie, an aspiring writer who does not need to be taken down a peg. On vacation in Verona with her restaurateur fiancé Victor (Gael García Bernal), Sophie discovers a 50-year-old letter to Shakespeare's tragic heroine nestled in the city's famous romantic wailing wall -- and impulsively replies. What follows are two sweetly engaging romances -- the quest of British pensioner Claire (Vanessa Redgrave) to reunite with her long-lost soul mate, and her uptight grandson and chaperone Charlie's (Christopher Egan) blossoming affection for would-be cupid Sophie.

"Bride Wars" director Gary Winick isn't exactly reinventing the form here -- "Letters" will hardly go down as the funniest or sharpest caper of the year. And I confess I had a hell of a time getting past the conceit that the sexy, exuberant, feeds-his-girlfriend-delicious-cheese Gael García Bernal is somehow supposed to not be the leading man here. (Note to Hollywood: If you made a movie just about Gael García Bernal and cheese, it'd do better than "Avatar.") Are we really supposed to believe Sophie would lose her heart to the relentlessly bland Egan, a performer my screening room companion noted "doesn't look like he has pubes"?

None of that matters much, however, because of the abundant chemistry between the film's two female leads, Seyfried and Redgrave. With her saucer-size eyes and winningly warm persona, Seyfried has the charisma of "Pretty Woman"-era Julia Roberts. Romantic convention dictates she initially play it frosty with Egan, but Seyfried compensates by turning her considerable wattage on the rest of the cast. Bounding around Tuscany, she's an open, adventurous girl searching for another woman's true love because she knows she hasn't found her own yet -- and not just in the form of a man. Sophie seeks creative inspiration, and something else -- a mother figure to replace the parent who abandoned her. Enter the impossibly beautiful 73-year-old Redgrave, who takes the most ethereal of scripts and infuses her character with abundant heartache, longing and hope. The movie ostensibly may be about Claire and Sophie's love affairs, but a quiet scene of Redgrave (whose character has lost a child) tenderly brushing Seyfried's hair delivers its greatest emotional wallop.

To say that "Letters to Juliet" is the best romantic comedy in a long time is, more than anything, a testament to how hateful so many Hollywood movies are. ("Leap Year," anyone?) There's just something about seeing two truly terrific actresses of different generations, playing women who aren't bitchy, that feels like getting a load of venom sucked out of one's veins. And it doesn't hurt that director Winick understands that a movie set in Tuscany should spend as much time possible showing off the jaw-dropping gorgeousness of the landscape. It may not be a great film, but for moviegoers, "Letters to Juliet" is like that long buried missive of its title -- a hopeful sign that when we hold out for good things, our patience is sometimes rewarded.

Letters To Juliet Movies Our Picks