President to "get angry" about oil spill

But can a congenital compromiser figure out how to harness public discontent? 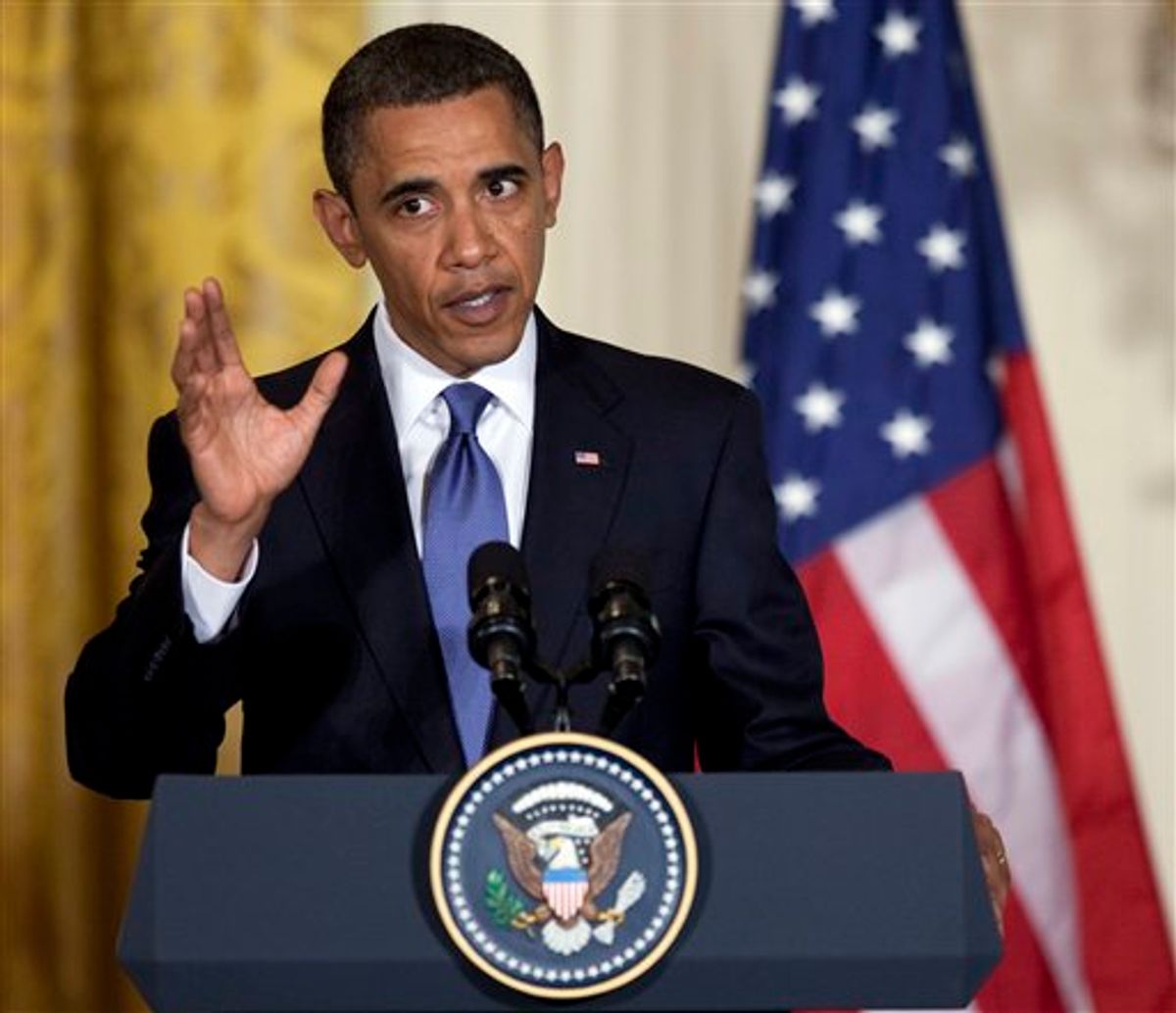 President Barack Obama gestures during a news conference with Afghanistan's President Hamid Karzai in the East Room of the White House on Wednesday, May 12, 2010 in Washington. (AP Photo/Evan Vucci) (AP)
--

Would we like Barack Obama when he's angry? It's a relatively rare occurrence, but you know how it looks. His voice gets deeper and he does a sort of weird forward lean over the microphone. The word is that we can look forward on Friday morning to an appearance of this angry Obama in the Rose Garden, to talk about the oil spill in the Gulf of Mexico.

There is, of course, much to be angry about. It turns out there's probably much more oil pouring out then we've been led to believe. A whistleblower says that BP regularly cheated on safety tests for its wells, and a refinery owned by the company has just been cited for multiple safety violations. The collapsed rig in the Gulf, called the Deepwater Horizon, was technically registered in the Marshall Islands -- that's a country in the south Pacific. As you might imagine, the Marshall Islands government was not doing much inspection. Instead, the small country contracts the job out, and lets the company being inspected pay for it.

Amidst all this, Transocean, the company that actually operated the rig, is suing to limit its liability to $27 million. And in the Senate, Alaska Republican Lisa Murkowski is blocking an effort to raise the liability cap for oil companies, from its current $75 million up to $10 billion. According to Murkowski, this would make offshore drilling uninsurable, and thus impossible. In other words, oil companies, and their elected mouthpiece, are demanding that they be allowed to keep all the profit they make by putting public resources at risk. Then, when they do cause a catastrophe, they expect the public to shoulder the cost. I wonder where we've seen this before.

So it's good that the president is going to get angry. But, as many commentators have been remarking for years now, anger doesn't seem to come naturally to Obama. It's not his style. The Washington Post's Ezra Klein put it well recently. "Obama's theory of negotiations is that extending an open hand makes it easier for people to see if the other side has made a fist. It both increases the likelihood of a deal and increases your chances of winning the PR war if a deal falls apart."

It's hard not to feel some sympathy for Obama’s predicament. In this case -- as in many policy areas -- progressive reform faces foes so powerful, and so entrenched, that to work effectively it would require massive public pressure. The easier route available to the president, and maybe even the only one, has been to opt for short-term, weakened reforms, which interests on the other side can get on board with. That's what Klein means by "the open hand." This can get important results, like health insurance for 30 million people. But it's also meant that the White House has come to rely on its own opponents to administer its agenda -- in which case, of course, they stop being the White House’s opponents at all, and become some kind of bedfellows. So when the president tries out his angry voice, he is, indeed, a little bit implausible.

After all, BP has been lying and cheating and tricking the government. But it hasn't only been doing that. The oil company is also working through the government. The Washington Post reports that the administration has become dependent on BP's expertise. The Post reports,

At times BP has pushed back on the administration's demands, including when the Navy proposed bringing in an amphibious vessel at the company's expense. One company official who spoke on the condition of anonymity said BP had urged the government to develop "a realistic shopping list."

And in another story today, the New York Times is reporting that the Minerals Management Service, in the Department of Interior, has been giving out drilling permits to oil companies -- including for the Deepwater Horizon -- without first clearing them with government scientists, as is required by law. One scientist who's worked at the agency for over a decade told the Times, "You simply are not allowed to conclude that the drilling will have an impact. If you find the risks of a spill are high or you conclude that a certain species will be affected, your report gets disappeared in a desk drawer and they find another scientist to redo it or they rewrite it for you."

The Department of Interior is run by Secretary Ken Salazar, who recently said, "Our job is basically to keep the boot on the neck of British Petroleum." Maybe that’s how angry Obama will sound today. The question is whether he's willing to stay angry, and put it to use. A cynical public seems to believe that the government no longer works in its interest. You can hear it in the widespread use of the word "bailout" to describe the whole current way of governing, instead of just the financial rescue. And people are right to be cynical. The question is whether Obama is willing to try to harness this discontent, and turn cynicism into action. In a way, that's his specialty. But he’s only ever done it with the open hand. It turns out that we might need a fist instead. Sometimes, the only hope is to be angry.