Forget all the violent action. The anchors to Ridley Scott's labored prequel are Russell Crowe and Cate Blanchett 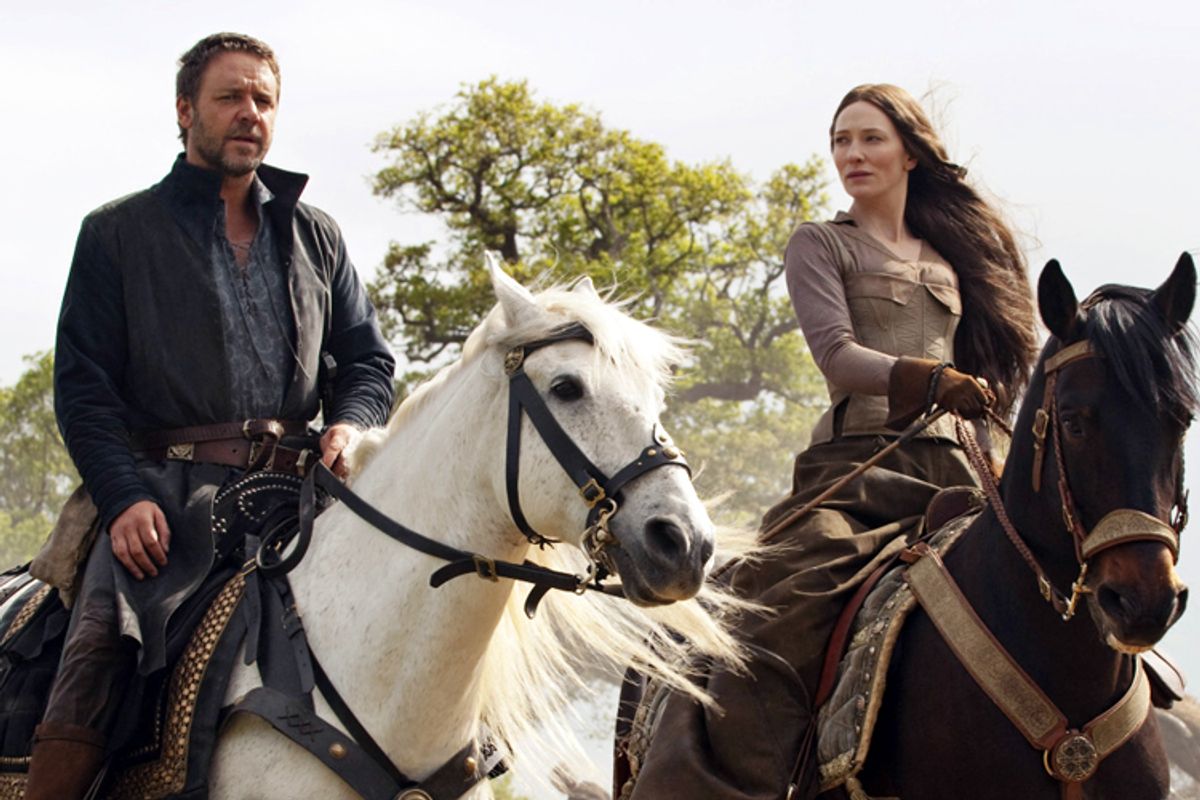 Ridley Scott's "Robin Hood," which opened the Cannes Film Festival with a relatively low-wattage premiere on Wednesday night, has pretty much all the problems you'd expect from a big-budget Hollywood revision of material that's been told and retold on screen 248 times. (That's not an official count.) It's a solid half an hour too long and is constructed around an endless series of incoherent action scenes in which sweaty, hairy men wearing Dark Ages costumes and layers of drainage-ditch mud hack each other apart. It's got all the stylistic tics of Scott's late-career films: Murky, misty, oddly lit group shots that move from the ground to shoulder level and then track from right to left; back-and-forth reversals of camera position that violate the traditional language of cinema for no particular reason.

It's got a screenplay from Hollywood hackmeister Brian Helgeland that suffers from a near-terminal case of prequel-itis and is loaded with on-the-nose emotional beats and blasts of present-tense American ideology. Turns out Robin Hood wasn't just some dude in Sherwood Forest who stole from the rich and gave to the poor. He also brokered the deal between England's King John and the landed aristocracy that produced the Magna Carta, the foundational document for civil liberty in the English-speaking world! He was also George Washington's great-great-great-great-grandfather, and sent the Gettysburg Address to Lincoln via a time-travel mind-meld!

OK, that last part isn't really in the movie. But it sure felt that way. Helgeland probably put quotes from Thomas Paine and Patrick Henry into Robin's climactic monologue before concluding, with great reluctance, that they just wouldn't fly. Then there's the question of the man uttering that monologue, sex-god bruiser Russell Crowe, who plays Robin with his customary blend of brooding, manly rectitude and ferocious hangover.

Crowe has never possessed much dramatic range, but he can be -- and sometimes is here -- a tremendously charismatic screen presence who imparts an air of naturalness even to stupid roles in stupid movies. There's something off about this performance, though. It's got a calculated movie-star-ness about it, as if Scott had assured him that every character issue and every plot point could be resolved by striking a gloomy non-expression at the perfect angle and holding it for five seconds. Hey, don't worry about any of that acting-school bullshit, Rusty. They loved you in "Gladiator"! (Which is, at the risk of being obvious, the career-topping, Oscar-sweeping formula Scott and Crowe long to recapture here.)

What I'm working my way around to saying (talk about damning with faint praise!) is that despite its abundant flaws and historical howlers and generally dimwitted tone, "Robin Hood" is a surprisingly enjoyable work of popcorn cinema, if you're willing to take it on its own terms. As ever, Scott hires the best production-design teams in the business, and his muddy vision of late medieval Britain -- where even London is little more than a collection of wood-and-wattle huts built around the royal castle -- is richly detailed and totally convincing. Much more important, this is a knockout love story built around two adult characters who've learned some of life's toughest lessons and faced real responsibilities.

I don't know how much money Cate Blanchett got paid to play Marian Loxley, the aristocratic widow who will become -- in the story's future tense -- Robin's Maid Marian. It was probably more than you and I combined will make in 10 years, but in terms of redeeming this film as a viewing experience, it might not have been enough. For my money, Blanchett's beauty only grows more luminiscent as she gets older (she celebrates her 41st birthday this week, if you haven't sent a gift), and in this role as a rural woman forced to run her absent husband's estate she commands the screen with supernal grace and a fiery sense of purpose.

Moreover, when paired with Blanchett, Crowe's gloomy demeanor and noncommittal expression -- he looks like a man unsure whether what he just ate was chocolate or cat shit -- seems directed at a worthy object. In this before-the-man-became-a-legend prequel, Crowe's Robin Longstride is an archer who skips out on the army of King Richard the Lionheart (Danny Huston) as it pillages its way homeward from the Crusades, perhaps because he's developed a conscience about all that wanton killing of Muslims. (Ascribing a 21st-century sense of morality and cultural sophistication -- not to mention literacy -- to the uneducated son of a 13th-century stonemason is nice and all. But, you know, not that plausible.)

After Robin and his band of fellow deserters fight their way through a series of narrow escapes and schmooze their way across the English Channel wearing knightly get-ups they stole off dead guys, he fulfills a battlefield promise to return one dead knight's sword to his family. The sword has some weird stuff written on the hilt, which makes Robin have these acid-flashback childhood memories. (I believe it's the Middle English equivalent of "Luke, I am your father!") The family turns out to be the Loxleys of Nottingham, and Robin finds Marian and her aged father-in-law (Max von Sydow, in another enjoyable crusty old guy role) barely clinging to their estate against bandits, rapacious tax collectors, and the buffoonish Sheriff of Nottingham (Matthew Macfadyen, and they're really going to have to make him more imposing if they want to make a credible sequel).

If you think that sounds complicated, we haven't even gotten into all the political back-stabbing, some of it ripped from the pages of history and some of it total bullshit: Vain and cruel pretty boy King John (Oscar Isaac) accedes to the throne after Richard's death, only to become the object of universal hatred and sinister French plots. This story's central bad guy is bald-headed, black-clad Godfrey (Mark Strong), an Anglo-French double agent with the scar, sneer and rapacious appetites to match -- along with an ability to be in all places at all times that suggests a DC Comics supervillain. (One could point out along the way that this movie presumes a conception of nations and nationality that simply didn't exist at the time, and that Richard the Lionheart was himself French. But why be pedantic?)

When Robin agrees to pose as Marian's missing husband in order to restore stability to Nottingham -- well, we know what's coming. At first she makes him park his manly hunk of flesh on the hearth to sleep with the dogs. Arf, arf! Owoo! But let's just say that this lady's been on her own for a while, if you catch my drift, and just to get the grime of 10 years of Crusadin' off Robin, she's got to help him wrestle all that chain mail off his impressive torso.

Seriously, though, the sexual chemistry between Crowe and Blanchett is fully convincing, and acts as an electrical field that energizes the mediocre movie around it. New romance after age 35 always carries an element of relief and reprieve, and this hard-luck couple find each other in the Middle Ages, when to be not yet dead of dysentery or gangrenous infection at that age required a minor miracle. When they look at each other with evident hunger, you can feel their shared wonder: Can it really be true that, in the middle of this miserable existence, God has granted me this? Solely because of its triumphant central coupling, this labored prequel -- which doesn't get Robin Hood and his Merrie Men into the forest until the very end -- may form the basis for a viable franchise.