The trial of President Obama: Part 1 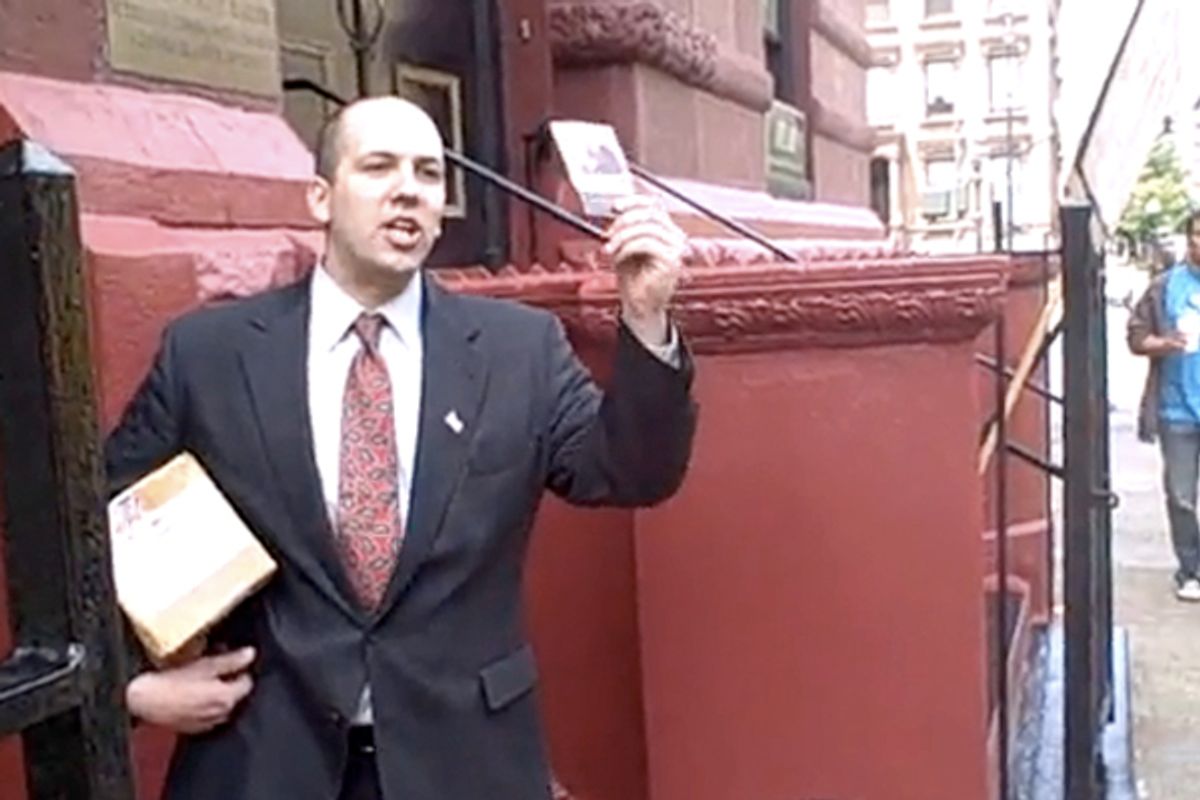 This is Part 1 of my report on the ATLAH World Ministries trial of Barack Obama. Part 2 will run on Monday. For my mostly unedited coverage of the day, click here.

Barack Obama will surely be pleased to know that the Rev. Dr. James David Manning does not plan to personally execute him at the conclusion of the trial he's holding in his Harlem church. Make no mistake -- Reverend Manning does think the president should be "hanged from his toes," but he is sure that the American people will recognize the legitimacy of the verdict and demand that a punishment be enacted, and he recognizes that some may be uncomfortable with the idea of executing an American president.

So the first order of business at the Trial of Barack Obama was to "delineate" (I think he just meant "delete") the most explosive charges -- treason and sedition -- from the indictment. Don't worry -- Obama still faces prison time for wire fraud.

Actually, the first order of business was technically a rally at Columbia University and a march up to Manning's 123rd Street ATLAH church. Around 50 people made the trek (which coincided precisely with the morning's brief, heavy rain shower -- sign from God, maybe?), and then waited outside as the courtroom was prepared.

The rally was at Columbia (where no one much seemed to notice it, as they were preparing for law school graduation festivities) because Rev. Manning is putting the school on trial, too. Specifically, Manning contends that the university "sold" a diploma to Barack Obama, and that Obama never even set foot on their grounds (he was in the CIA at the time, see). It's an interesting wrinkle in the sometimes contentious relationship between Columbia and the churches and residents of Harlem. Manning seems to be trying his hardest to add Columbia-related conspiracies to the unofficial mythos of the Birther movement.

The crowd was decidedly more diverse than your average Tea Party event. White folk up from the South mingled cheerfully with black women dressed for church. A couple of young Ron Paul supporters chatted with a 50-something potential juror from Long Island. Anthony Tolda, a Constitution Party candidate for Congress, gave me a copy of the Constitution and his campaign spiel. (His claim to fame: heckling New York Rep. Steve Israel at a town hall, which lead to a Cavuto appearance.)

Jean and her husband, Don, were up from Hawaii. After some small talk about the work Manning and his wife had done restoring the 100-year-old former men's club that he uses as his church, I asked her if she'd done any research of her own into finding the president's birth certificate.

"Well, you know, what I find interesting is that I have three children. My last son, I gave birth to him at home. It was very easy to get a birth certificate for him. So I can only imagine that it was even easier back in 1961."

The sign outside the ATLAH World Missionary Church is a word soup of charges against Obama ("A TALIBAN MUSLIM ILLEGALLY ELECTED PRESIDENT USA HUSSEIN"). It's been up for two years, with occasional changes, neighbors told me.

The neighbors aren't thrilled with it, or with Manning. Pascal Lewis lives two doors down from the church. I saw him holding an official Obama campaign sign, along with a "Harlem Welcoming Committee" placard. "I've sort of been trying to ignore most of what's been going on," he told me, "but this can't be ignored."

"So what we thought we would do is a counter-rally, to support our president, and to show that there are more [Obama] supporters [in Harlem] than not." Lewis also told me Manning has a school at his church, which seemed to offend him much more than a simple nutty trial. The time had come, Lewis has decided, to run Manning out of the neighborhood. "He's probably got somebody political that's helping him still get his funding."

His counter-rally had only a few official participants, but just about every resident who walked by almost immediately joined, at least long enough to stand in solidarity or shout at a "Tea Party person."

That's how the fight broke out. Helen's lived in Harlem for years, but she only just noticed the offending sign outside ATLAH this week. When she saw a crowd of people outside, she came over and began yelling at the trial-goers. She accused the assembled crowd of racism. The counter-protesters began chanting. The cops got out of their car to separate Helen from an elderly white man who kept telling her that he "attends an all-black church." I caught most of the confrontation on video.

The Birthers (I'm not sure what else to call them -- they don't associate with the Tea Party and it was a diverse bunch of people, as I mentioned) made a point of saying that it was the liberals who were confrontational, obscene, rude and almost violent, while they remained calm and polite. That's mostly true. The counter-protesters shouted to defend Helen's right to "free speech," but no one was threatening it; they were just responding to her palpable rage.

But throwing a mock treason trial of the president at a church whose sign calls him a Taliban Muslim, and doing this all in the heart of Harlem, is, quite obviously, confrontational. I don't think anyone can be blamed for their anger.

Security was intense -- multiple guards with earpieces and a metal detector. And no cameras allowed inside. But everyone at the church was unfailingly kind and polite. Even when I said I was a reporter. Getting the crowd (which by this point had swelled to maybe 75 people) in took hours.

But once we were finally in, the Rev. Manning addressed us:

"We are going to have this trial. Praise the lord." But first: lunch!

Part 2 of this report, along with updates from the ongoing trial of Barack Obama, will run on Monday.