Cannes: Woody Allen's "You Will Meet a Tall Dark Stranger"

Cannes goes nuts for a mean-spirited movie about love and death. But he's still a crack-up! 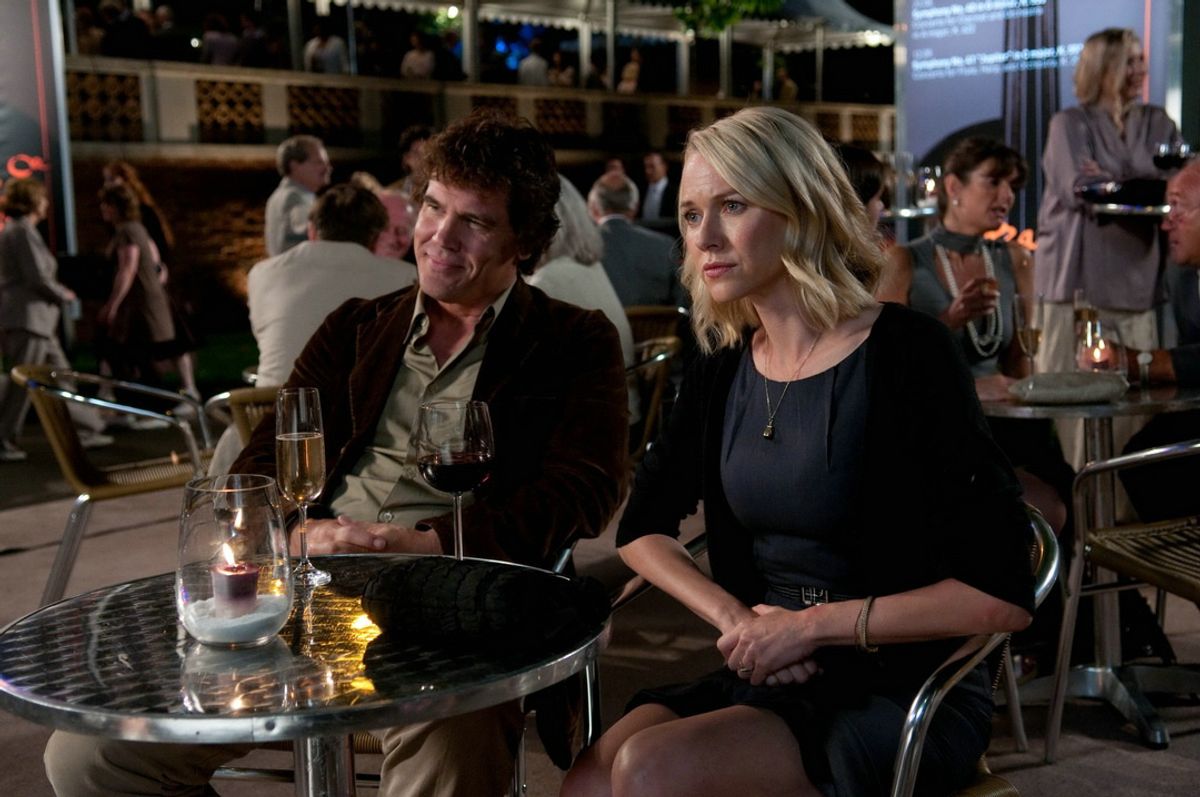 CANNES, France -- It's tough to illustrate, let alone explain, the immense reverence many educated Europeans still hold for Woody Allen, even with his best films 20 to 30 years in the past. Saturday morning's press preview of Allen's new movie, "You Will Meet a Tall Dark Stranger," provoked a near-panicked mob scene at the gates of the Grand Théâtre Lumière, the largest Cannes theater. I struggled to keep my balance as a pair of burly Italian journalists used their combined girth to bull past me in the swirling human tide and get to the security barrier first. An elderly gentleman next to me swayed, but did not go down. (He might well have been killed, which would have matched the tone of the film.) Ticket-holders denied admittance were left on the pavement, howling at the impassive guards.

It was much more difficult to get into "Tall Dark Stranger" than into Oliver Stone's "Wall Street" sequel -- and the press screening of "Robin Hood" I attended was perhaps one-third full, in a smaller venue. All of that to see a slight, morbid, misanthropic 2010 Woody Allen film. At 8:30 in the morning.

When I say "misanthropic," by the way, I'm neither being judgmental nor breaking any news. Allen himself would probably embrace the word. Cannes is one of the few environments where he takes questions from the media, and he provided us with a vintage Woody performance, despite looking frazzled, gray and ill, and several times forgetting the names of people and films. (Allen at 74 looks older than Portuguese director Manoel de Oliveira, who appears robust at 101.) Asked what his film had to say about life, he responded: "Life! I do believe it's a grim, nightmarish, meaningless experience. One must have one's illusions to go on living."

Elaborating on why he no longer acts in his own films -- arguably a factor that has robbed them of vigor and focus -- Allen said: "Well, for years I played the romantic lead. Then I got too old. And it's no fun to play the guy who doesn't get the girl. So I'm just over in the corner, directing the film. 'See that old guy over there? He's the director!' I'd rather be the guy who sits opposite the girl in the restaurant and lies to her. If I can't find a way to get the girl, I won't do it at all."

As Allen makes clear within this ensemble comedy and made clear again at the press conference, the title has a double meaning, referring both to the conventions of fortunetelling and also to the "tall dark stranger all of us will meet eventually, whether we want to or not." All the characters in this film -- the central roles are Naomi Watts and Gemma Jones as a squabbling mother and daughter, supported by Josh Brolin, Anthony Hopkins and Antonio Banderas -- are eager to reinvent their lives and find new love, but also conscious, to a greater or lesser degree, that time's winged chariot is carrying them inexorably onward toward its final destination.

"My relationship with death remains the same as ever," Allen quipped at the press conference. "I'm strongly against it."

"You Will Meet a Tall Dark Stranger" is an old-fashioned roundelay in which old marriages crumble and new relationships begin, but one in which nobody gets what they want. Or rather, people who get what they want do so under false pretenses, because they are literally living a lie. This is a universe where emotional honesty is a liability that leads to loneliness and betrayal, while emotional fidelity is entirely out of the question.

Although it was shot in London, this isn't really one of Allen's postcard-from-Europe movies. These middle-class characters and their mid-life angst could be found in any metropolis in the Western world, and Allen displays no interest in the setting and provides no local color. (He pretty much admitted, in the press conference, that he shoots overseas these days because it costs less, and because most of his financing comes from Europe.) At the center of the story are struggling American novelist Roy (Brolin) and his English wife, Sally (Watts), whose crumbling marriage sends everyone else in the film spinning off like cosmic debris from an exploding star.

Roy's supposed to be home finishing his fourth novel while Sally works at a high-end art gallery to pay the bills, but he's become more and more convinced that he's a failure, and spends most of his day staring out the window at Dia (Frieda Pinto), the lissome classical guitarist who lives across the street. Meanwhile, Sally carries an increasingly smoldering torch for her urbane boss (Banderas), whose offstage wife is described as both frosty and bipolar. Sally's dotty, meddlesome mother, Helena (the marvelous Gemma Jones), who is in many ways the movie's hidden protagonist, finds comfort after her own late-life divorce in expensive advice sessions with a fortuneteller who predicts -- well, you know.

Then there's Anthony Hopkins as Sally's father, Alfie, the ultimate divorced older-guy cliché: He buys a convertible, starts going to the gym, moves into a bachelor pad well stocked with liquor, and ultimately announces he's marrying a leggy Cockney blonde named Charmaine (the likable Lucy Punch) whose first several dates with him were, shall we say, business transactions. Hopkins may cop the prize as Greatest Actor Ever Insultingly Misused in a Woody Allen Film (although there's plenty of competition). This is also the cruelest and shallowest of the old-fool May-December relationships portrayed in Allen's films, and like all the others it provokes uncomfortable reflection on the director's well-known personal life.

These days, Allen is using his gift for light comedy as a thin veneer over an essentially sour, thin-spirited worldview, and that worked a lot better in "Vicky Cristina Barcelona," with its hot chicks and stunning Spanish locations, than it does here. His movies were less fundamentally depressing when he was obsessively mimicking Ingmar Bergman.

Honestly, I wouldn't mind the meanness or moral bleakness of this movie if it had even half the wit, energy or eye for details of place and class found in his best New York films. It may be that Allen's famously rapid shoots and total non-interference with actors, formerly among his distinctive strengths, have become weaknesses: This picture feels like a working draft whose jokes don't click and whose pace desperately needs a shot of adrenaline.

So Alfie gets the sexy young wife and Roy winds up with a potential bestseller, but for reasons I won't discuss those things are not likely to make them happy. Of all the people in the film, only Helena, who hooks up with a ludicrous New Age bookstore proprietor (Roger Ashton-Griffiths) and begins intensively researching her past lives, seems to have contentment in her future. Speaking about that couple, Allen said: "I'm not the first person to observe that you have to have illusions in order to be happy. Freud said it, Nietzsche said it, Eugene O'Neill said it. If I met those people at a party, I'd think they were ridiculous and silly. But they'd be happier than I am."