If a foreign power were dropping missiles on your town, would you call the resistance "terrorism"? 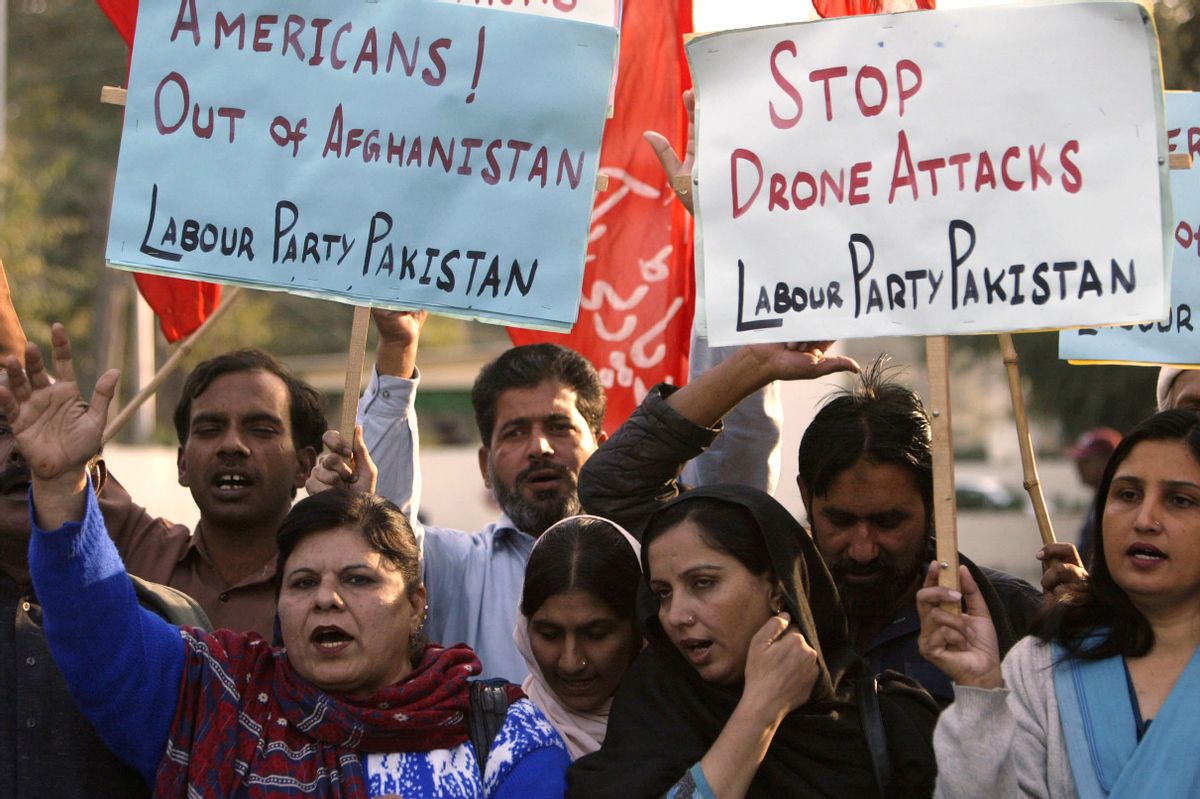 Imagine, if you can, an alternate universe.

Imagine that in this alternate universe, a foreign military power begins flying remote-controlled warplanes over your town, using on-board missiles to kill hundreds of your innocent neighbors.

Now imagine that when you read the newspaper about this ongoing bloodbath, you learn that the foreign nation's top general is nonchalantly telling reporters that his troops are also killing "an amazing number" of your cultural brethren in an adjacent country. Imagine further learning that this foreign power is expanding the drone attacks on your community despite the attacks' well-known record of killing innocents. And finally, imagine that when you turn on your television, you see the perpetrator nation's tuxedo-clad leader cracking stand-up comedy jokes about drone strikes — jokes that prompt guffaws from an audience of that nation's elite.

Ask yourself: How would you and your fellow citizens respond? Would you call homegrown militias mounting a defense "patriots," or would you call them "terrorists"? Would you agree with your leaders when they angrily tell reporters that violent defiance should be expected?

Fortunately, most Americans don't have to worry about these queries in their own lives. But how we answer them in a hypothetical thought experiment provides us insight into how Pakistanis are likely feeling right now. Why? Because thanks to our continued drone assaults on their country, Pakistanis now confront these issues every day. And if they answer these questions as many of us undoubtedly would in a similar situation — well, that should trouble every American in this age of asymmetrical warfare.

Though we don't like to call it mass murder, the U.S. government's undeclared drone war in Pakistan is devolving into just that. As noted by a former counterinsurgency advisor to Gen. David Petraeus and a former Army officer in Afghanistan, the operation has become a haphazard massacre.

"Press reports suggest that over the last three years drone strikes have killed about 14 terrorist leaders," David Kilcullen and Andrew Exum wrote in 2009. "But, according to Pakistani sources, they have also killed some 700 civilians. This is 50 civilians for every militant killed."

Making matters worse, Gen. Stanley McChrystal has, indeed, told journalists that in Afghanistan, U.S. troops have "shot an amazing number of people" and "none has proven to have been a real threat." Meanwhile, President Obama used his internationally televised speech at the White House Correspondents Dinner to jest about drone warfare — and the assembled Washington glitterati did, in fact, reward him with approving laughs.

By eerie coincidence, that latter display of monstrous insouciance occurred on the same night as the failed effort to raze Times Square. Though America reacted to that despicable terrorism attempt with its routine spasms of cartoonish shock (why do they hate us?!), the assailant's motive was anything but baffling. As law enforcement officials soon reported, the accused bomber was probably trained and inspired by Pakistani groups seeking revenge for U.S. drone strikes.

"This is a blowback," said Pakistan's foreign minister, Shah Mehmood Qureshi. "This is a reaction. And you could expect that ... let's not be naive."

Obviously, regardless of rationale, a "reaction" that involves trying to incinerate civilians in Manhattan is abhorrent and unacceptable. But so is Obama's move to intensify drone assaults that we know are regularly incinerating innocent civilians in Pakistan. And while Qureshi's statement about "expecting" blowback seems radical, he's merely echoing the CIA's reminder that "possibilities of blowback" arise when we conduct martial operations abroad.

We might remember that somehow-forgotten warning come the next terrorist assault. No matter how surprised we may feel after that inevitable (and inevitably deplorable) attack, the fact remains that until we halt our own indiscriminately violent actions, we ought to expect equally indiscriminate and equally violent reactions.