This week in crazy: Spencer Pratt

The bad boy of "The Hills" has always been nutty. But lately, his routine isn't funny so much as flat-out scary 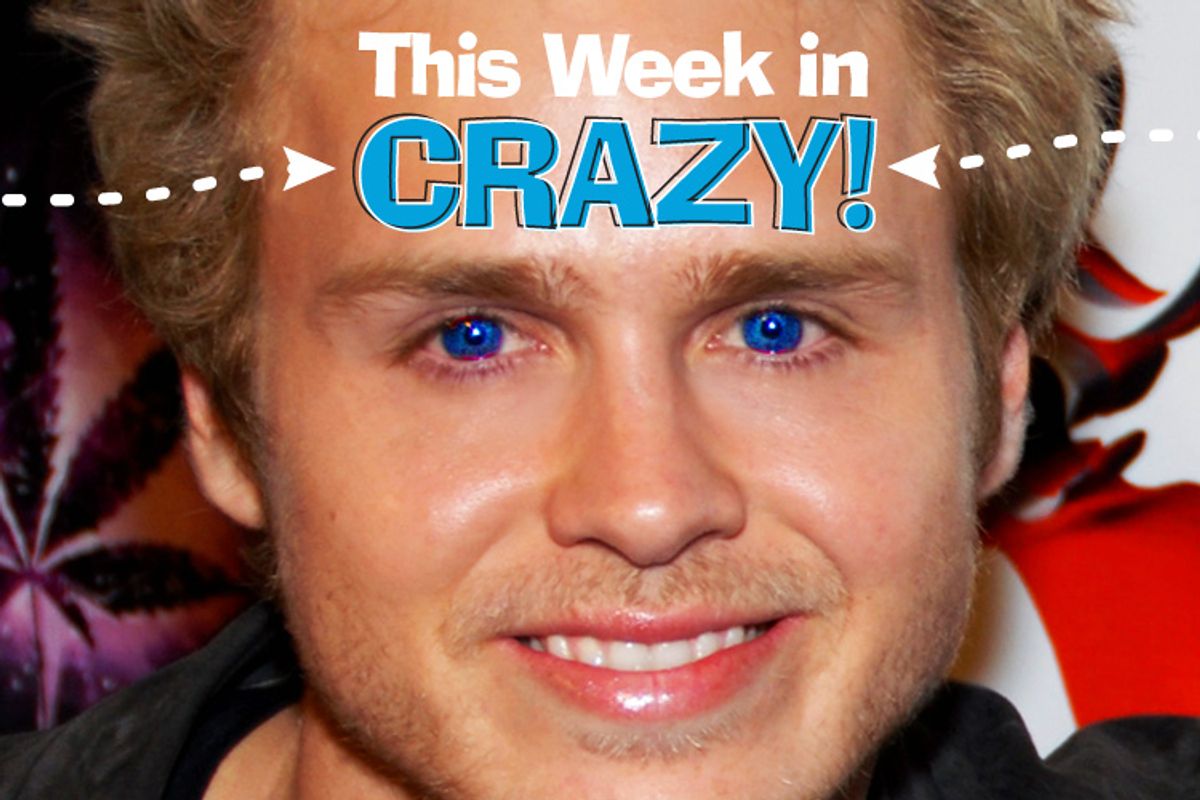 Spencer Pratt is a man whose claim to fame is being a lunatic jerkwad. So it's no small thing that lately, he's managed to raise the bar on his own bonkers behavior.

How crazy is Pratt? Well, the self-professed Christian has been carting around crystals to harness their "healing" energy -- a show of new-age hokum even more dated than a Kabbalah bracelet. He's also creating a dating show with "Jersey Shore" star Snooki's ex Emilio Masella -- called "Fist Pumping 4 Love." There's also a "Guido Juice" energy drink in the works. On Thursday, he and wife Heidi Montag called the cops to remove Montag's mother when she showed up at their reportedly rather squalid house.

But wait! I haven't even gotten to the disturbing part yet.

On "The Hills" this week, Pratt set the tone at a child's birthday celebration by drawling, "This is the first time I've been at a party where there aren't people I wanted to muuuuuuuuuuurdeeeer." He then proceeded to state that Montag's mother had decided to "rape my wife emotionally in every single crevice on her body" and declare, "She's not God. She didn't make Heidi. She's just a VAGINA." Then later, he really got angry, yelling to his sister-in-law Holly while a giant crystal dangled from his neck that "You're going to burn!" Heidi, emotion almost crossing her surgically frozen face, played dutiful codependent throughout, gently telling her mate to "breathe."

Given Pratt's fondness for magical totems, hair-trigger rage and shrieking "Whooooooooooooo," he's either seeking to wring a few more moments out of those dwindling 15 or he's a bona fide loon job. But when even your best bro Brody Jenner is telling you, "You've lost it," it's a safe bet you're pretty far gone.

Being a raging douche on television is, in the 21st century, a legitimate career path. But there's something about Pratt's public meltdown that goes well beyond anything that could be called entertaining. MTV Networks already has an alarming history of giving a platform to people who aren't merely run-of-the-mill weirdos but full-throttle abusers. And watching Pratt repeatedly keep his wife away from her family, hearing him tell his friends that "I don't let her go on TV, no computers. She is logged out of the Matrixxxxxxx," it's hard not to suspect that this isn't what Montag calls "fun crazy" but rather, a genuinely scary relationship, propelled by a man who is master of neither his temper nor his jealousy. His doll-like bride may keep begging him to breathe, but from the looks of things, Spencer Pratt is a volcano of crazy -- and it's just a matter of time before he blows.

The Hills This Week In Crazy