Who's more condescending to Middle America?

A Republican campaign ad in Alabama -- horse, hat and gun -- shows how the GOP can outdo lefty elitists 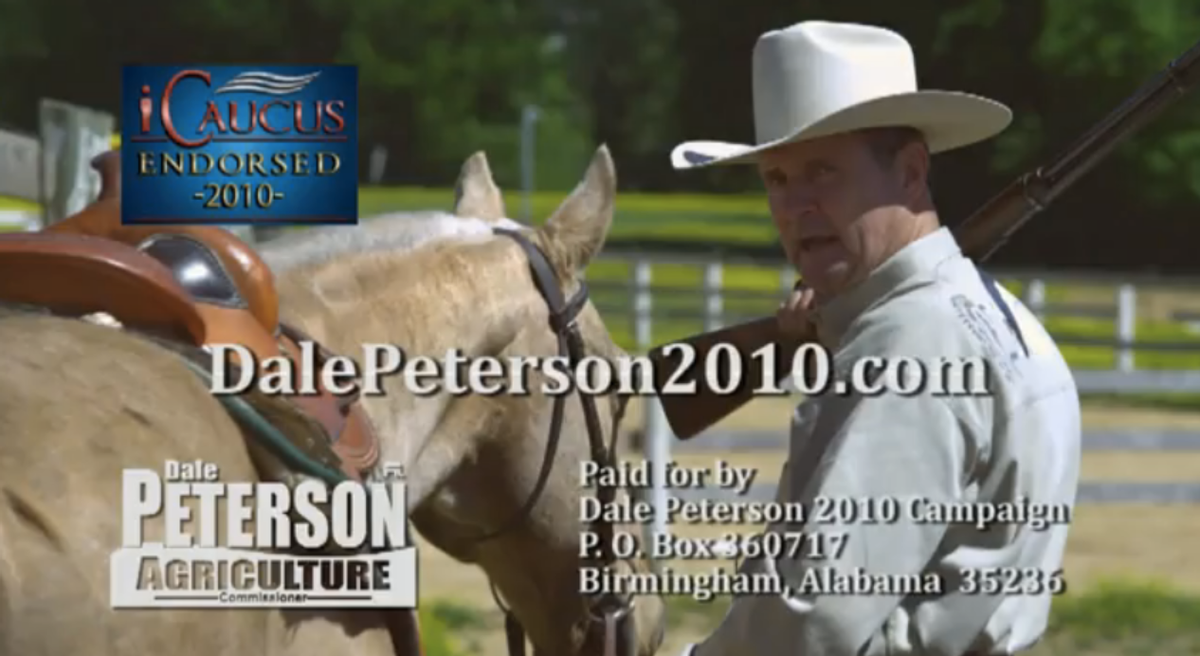 Conservative hacks love little more than accusing liberals of being condescending elitists who think that most Americans are hopeless simpletons. It's not so much that they’re entirely wrong about this -- elitism maintains a real presence on the center-left -- as that they're throwing stones from glass houses.

Here's Michael Barone, for example, once known as an enyclopedically knowledgeable elections analyst, tossing some standard-issue accusations of elitism:

My theory is that these well-intentioned folk [liberals] see the American people as a Howling Mob. They think that if Americans find out that Islamists are attacking us, they will go out and slaughter innocent Muslims. They think that Americans are incapable of understanding the simple truth that while most terrorists are Islamists, the large majority of Muslims are not terrorists.

By total coincidence, Barone's column came out today, at the end of the same weekend in which we heard about a campaign ad out of Alabama that gives new meaning to the phrase "soft bigotry of low expectations." (Video's at bottom.) Coming from the Dale Peterson campaign for agricultural commissioner, this spot manages to hit every symbolic sweet spot with such systematic cynicism that you almost have to applaud.

At the start, Peterson admonishes the viewer, as he takes off his aviator sunglasses and dismounts his horse, "I've been a farmer, a businessman, a cop, a Marine during Vietnam -- so listen up!" Some other, less-known facts about him: he fought at the Alamo, raised the flag at Iwo Jima, and, according to some rumors, is linked romantically to Lady Liberty.

The ad then proceeds through the usual paces: "Thugs and criminals … [who] don't give a rip about Alabama" are looting the public treasury, family farms are disappearing, "illegals are being bused in by the thousands" -- you get the idea.

Or, at least, you think you do, until you get to second 50 of the ad. At that point, while promising to "name names and take no prisoners," Peterson slowly lifts a gun into the frame, and dandles it around his shoulders a little bit. It's almost pornographic.

The Peterson ad is the latest in a series of masterpieces of loopy demagoguery to come out of Alabama this cycle, but it fits in the longer tradition of Southern right-wing populism. In fact, it reminds me of nothing quite so much as the favorite saying of 1940s Georgia rabble-rouser Gene Talmadge: "The poor dirt farmer ain’t got but three friends on this earth: God Almighty, Sears Roebuck and Gene Talmadge."

It's really difficult to give the Peterson ad an honest viewing and come away thinking that this guy thinks highly of the people whose votes he's after. Besides the arguments being total nonsense, the symbolism is just way too aggressive. Peterson tips his cards when he edges that gun into the frame, as if to say, "Yeah, those idiots will eat this up."

But here's the crucial thing about right-wing condescension and left-wing condescension: As you may notice, they're not symmetrical. Conservatives aren't condescending toward the liberal, urban base the way liberals are toward the conservative, rural base. (OK, yes they are, but it's not necessarily their bread and butter.) In other words, both elitisms are targeted at the same people. Barone accuses liberals of writing off Middle America (itself a rather condescending generalization, but there we are) as an angry mob. Peterson consciously tries to appeal to -- ugh -- Middle America as an angry mob. Either way, nobody's exactly listening, are they?

There are two ways of reading this. The first, which I suspect a number of Salon commenters will be eager to jump to, is to validate the Barone view, and for that matter, the idea behind the Peterson ad. It's awfully tempting to write off populist conservatism as the last refuge of idiots, the politics of the bamboozled. But this is, to some degree, blaming the victim. And that's not exactly a commendable impulse.

Alternatively, though, we might note that nobody seems able to appeal to the mythic Middle American voter in honest terms, and just ask why this is. It seems to me a signal failing of the configuration of American politics that both parties are unable to relate to the white lower middle class (does that seem like a fair way to put it?) except by pandering or mocking. Surely, if we hadn't surrendered, as a nation, in the fight against inequality, that might've been a start.