Outed CIA agent, subject of "Fair Game," hits the beach at Cannes with Queen Noor to say a disaster is looming 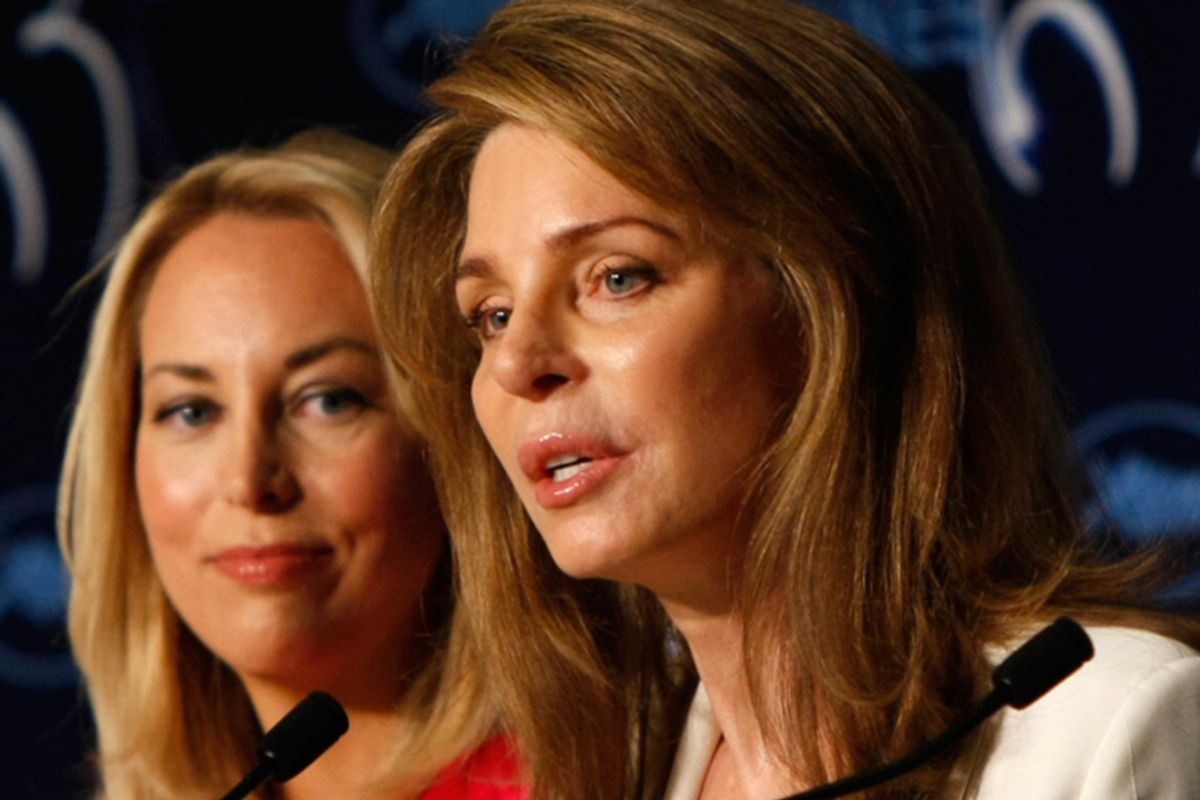 Queen Noor of Jordan speaks during a press conference in Cannes for the film "Countdown To Zero", as former CIA agent Valerie Plame Wilson looks on.
--

CANNES, France -- Like a lot of people, I've been living under the blithe impression that the end of the Cold War had ended the threat of nuclear annihilation, and that the possibility of al-Qaida or some similarly nihilistic group acquiring a weapon was remote. At a screening and press conference here for "Countdown to Zero," the enraging and terrifying documentary from British director Lucy Walker, Participant Media and producer Lawrence Bender (best known as the man who makes Quentin Tarantino's movies happen), I learned how wrong all that was.

This festival remains an awkward venue for documentaries, which tend to provide neither the star power nor the nosebleed high-art status on which it feeds. So while reporters and amped Euro-teens alike thronged the late-night screenings of a risible Internet-suicide thriller called "Chatroom" over the weekend, "Countdown to Zero" flew mostly under the radar. That was despite a high-octane, only-in-Cannes press conference that presented a fascinating and unlikely blend of personalities: former CIA agent Valerie Plame Wilson (yes, the one outed by the Bush administration), Queen Noor of Jordan and former Norwegian Prime Minister Gro Brundtland, alongside Bender, Walker and a handful of other experts and advocates.

As Bender noted, this film's producers are hoping to replicate the success of perhaps the first documentary to grab worldwide headlines at Cannes. "Some of us who were here with 'Inconvenient Truth' learned firsthand what the power of a movie can accomplish," he said. Brundtland, now a United Nations special envoy, noted that "An Inconvenient Truth," and the global attention it generated, made a crucial difference to the Nobel committee that awarded Al Gore and the climate scientists the Peace Prize in 2007.

Perhaps the most surprising spokesperson on the panel was Queen Noor -- the former Lisa Halaby of Washington, D.C. -- who came across as a serious and substantial advocate, even while dressed as if for a champagne brunch at the Carlton Beach. She is a co-founder of Global Zero, the international movement to eliminate nuclear weapons, which hopes to use Walker's film as an organizing tool.

For instance, when I asked the queen -- technically, she has been "queen dowager" since King Hussein's death in 1999 -- what can be done to convince reluctant governments to sign on to Global Zero's mission, she responded with specifics: "We believe we can work on the former architects of nuclear programs around the world. Many of them already support us, and many others can be convinced. They are the people who understand that the danger of nuclear terrorism outweighs the security that a nuclear deterrent provides for any state."

I'll provide fuller coverage of "Countdown to Zero" before its July release in the United States, but Walker closely follows the wake-up documentary approach of "Inconvenient Truth" and "Food, Inc." -- which isn't surprising, since several people involved with those films are involved with this one. She makes a cogent and hair-raising case that, although the U.S. and Russia have reduced their strategic nuclear arsenals, the possibility of at least an isolated nuclear disaster is greater than ever. Nuclear terrorism, nuclear war in the Middle East or South Asia, or grotesque accident -- all are unfortunately plausible.

Various terrorist groups, including al-Qaida and the Japanese cult Aum Shinrikyo, have made good-faith efforts to acquire highly enriched uranium or plutonium -- and once you've got that, building a bomb is mostly a question of money and technology, not immensely complicated know-how. No one knows exactly how much nuclear material is missing from the former Soviet Union, but it's somewhere between a little and a whole lot. If there's one thing the experts in the film agree on, it's the fact that as long as there are any nuclear weapons in the world, there will be a lot of them, and that our realistic choice is to live in a world with no nuclear-armed states or a world with at least 20 or 30 of them, some highly unstable and unpredictable. (There's one of those right now: It begins with "P" and ends with "stan.")

As one-time CIA arms-control expert Valerie Plame Wilson explained, the doctrine of "mutually assured destruction" or MAD, which kept the peace during the Cold War, is no longer viable. "We're no longer in a bipolar world," she said. "We may hear pushback from those who say MAD worked well enough. The world has changed now. It's totally different. I have become convinced that if we don't do something about nuclear weapons, it's just a question of when, not if, something terrible happens."

A couple of days from now, we'll see Wilson portrayed by Naomi Watts in Doug Liman's feature "Fair Game," which fictionalizes the scandal that erupted when the Bush White House disclosed her identity. (She had previously been working undercover.) But her appearance here with "Countdown to Zero" and her decision to raise her public profile around the nuclear issue, Wilson said, was purely coincidental: "What are the odds of that happening?" she quipped. "Higher than any of the physicists in the film can calculate.

"When I was working for the CIA," she continued, "I was involved in taking measures -- and hopefully they were effective measures -- to keep these materials out of the hands of the bad guys. But that was just buying more time until other measures could be taken. I truly believe there are no reasonable options now other than elimination. It's not enough to divert and defer. It's been 20 years since the fall of the Berlin Wall, and really nothing has been done to control the spread of nuclear weapons.

"I try to stick to my knitting, as I like to say -- I don't talk about things I don't know about. But I do know something about field operations, about how terrorists might try to acquire and deploy a nuclear weapon. If I can help by talking about that, I'm happy to do so."