The site screwed up, big-time. But is this the beginning of the end, or just the cost of social networking? 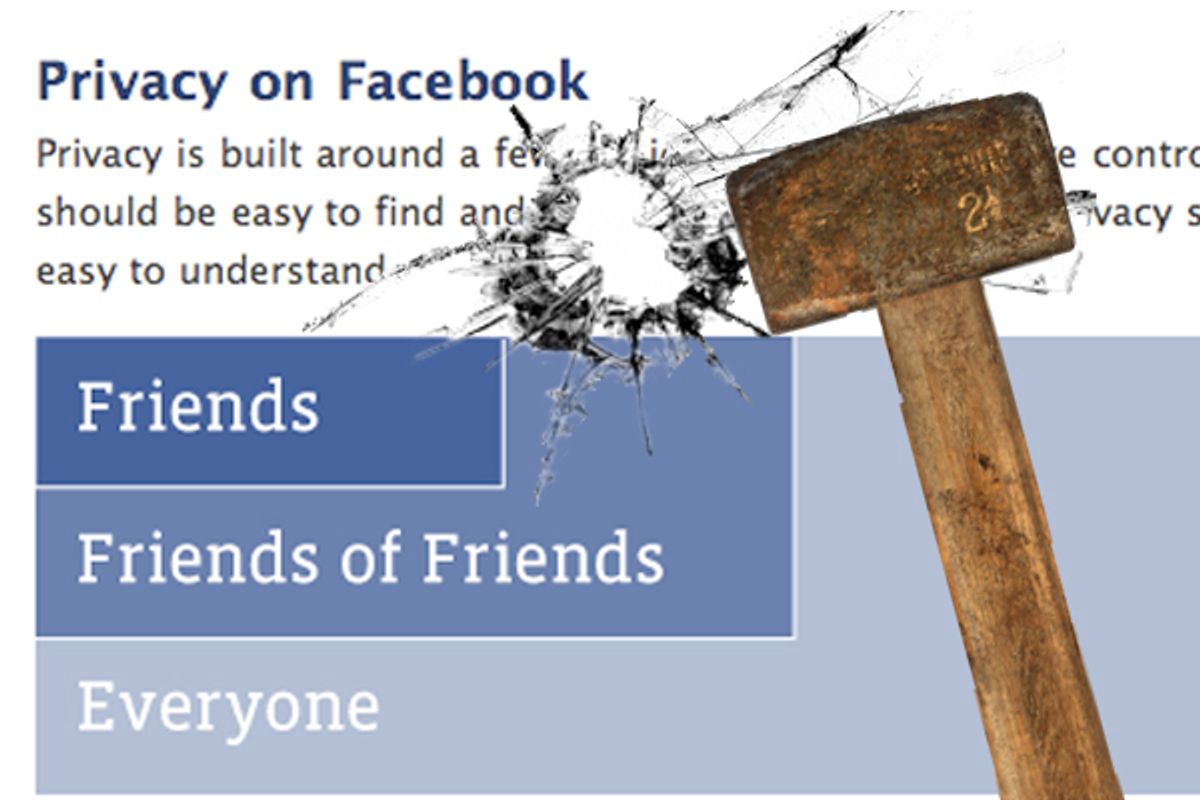 Since making the profile information of its 400 million users more, oh, let's call it "accessible," last month, the 6-year-old social networking site has felt the wrath of its populace. To listen to all the apocalyptic talk, you'd think FB is doomed to become the ghost town of MySpace or even, gasp, Friendster. Watch your back, Twitter, because the Net can turn on you fast.

In the blink of an eye, "how to delete Facebook account" has become a thriving Google trend. (Hint: It's not easy.) For those who haven't already stalked off -- and there are many -- a new website declared May 31 "We're Quitting Facebook Day." And when a team of NYU students announced the ambitiously named Diaspora*, the "privacy aware, personally controlled, do-it-all distributed open source social network," they blew past all fundraising goals faster than that "Paparazzi" kid could land a record deal.

But the thing about online communities is that they get proprietary. And while this won't mean the end for Facebook, the way the site handled its main commodity -- human beings -- showed a degree of clumsiness that couldn't help alarming its members.

Those "new ways to personalize your experience" suddenly included displaying your friends' activities even while you were visiting other sites.  Some people might enjoy reading CNN.com and finding out what stories their Facebook friends liked. And some might note that they didn't ask, nor are they even registered at CNN, and why am I seeing recommendations from people I don't know, and in fact isn't this all kind of creepy? And why should a post I made on FB mentioning my alma mater show up on the college's Facebook community page? What the hell?

The troubling part wasn't that Facebook had made a big change. It's their site, after all, as anyone who's lived through their increasingly shitty redesigns understands. Their whole modus operandi is to revamp, let the users bitch, and grow somehow bigger than ever. And, frankly, the issue of how much the world knows about what I like on Yelp won't be the hill I die on. Furthermore, anybody out there gassing on about their hangovers, sexual misadventures or evil bosses on Facebook may be doing just fine sabotaging their lives without anybody else's help.

But where Facebook screwed up was by revamping the terms in a manner we might generously call "sneaky." Then they really bombed out by not just resetting their users' defaults to "pimp us out to your sponsors" but instead making those settings god-awful complicated to change. As a recent story in the New York Times broke it down – if you want to change your privacy options, "you will need to navigate through 50 settings with more than 170 options."  Wow, Betty White was right – this really is a compete waste of time. And have you read their lengthy privacy policy? You're going to be a while. Here's one fun part, though -- "If your friend connects with an application or website, it will be able to access your name, profile picture, gender, user ID, and information you have shared with 'everyone.' It will also be able to access your connections." If I want to go TMI, that's one thing, but using my friends? That's just tacky.

In its online pitch for something new, the Diaspora* team states that "social networks have only existed ten years." Yet the Facebook debacle is really just a grander version of the kinds of arguments people had on Usenet 20 years ago. And at their heart, the issues of trust, information and privacy are as old as human interaction itself. But online communities are a unique population. The comfort of posting from one's own space, the control we have over how much we reveal: They create a dualism in the mind. On the one hand, we know we're pretty much broadcasting to the world; that's why we do it in the first place. Hello! Look at this funny thing I found on YouTube! On the other hand, it's easy to forget that our intimate thoughts might be scrutinized by that person we forgot we friended, or by that company that wants to peddle those thoughts any way it sees fit. It's hard enough keeping track of who we're actually talking to when we engage in online conversation. But it's practically impossible when the host changes the rules.

It's undeniably crappy for Facebook to screw around with the information we gave them under different terms. You don't get 14 privacy groups to file a complaint against you with the Federal Trade Commission by being a pillar of great public relations. But we the users still have the power to readjust our settings. We can use resources like reclaimprivacy.org to go even deeper. We can also just leave. Because the terrible and great thing about Facebook is that it really doesn’t owe us anything, nor do we owe it. We've paid our dues, in the form of our personal information.

What founder Mark Zuckerberg and company, in a stunning show of "too big to fail" cockiness, forgot along the way is that every Face in that Book represents a person. So synergize that, bitches. Every photo, every little thumbs-up icon, every superpoke is more than a set of eyeballs. It's people -- people who perhaps foolishly reveal too much, or forget that nothing is really free, but people who deeply, passionately long for connection. And when they find it, and feel it, they don't take kindly to having it taken for granted. Facebook may have made it hard for its users to change their settings and delete their accounts, but they're learning how very easy it's made it for them to leave.