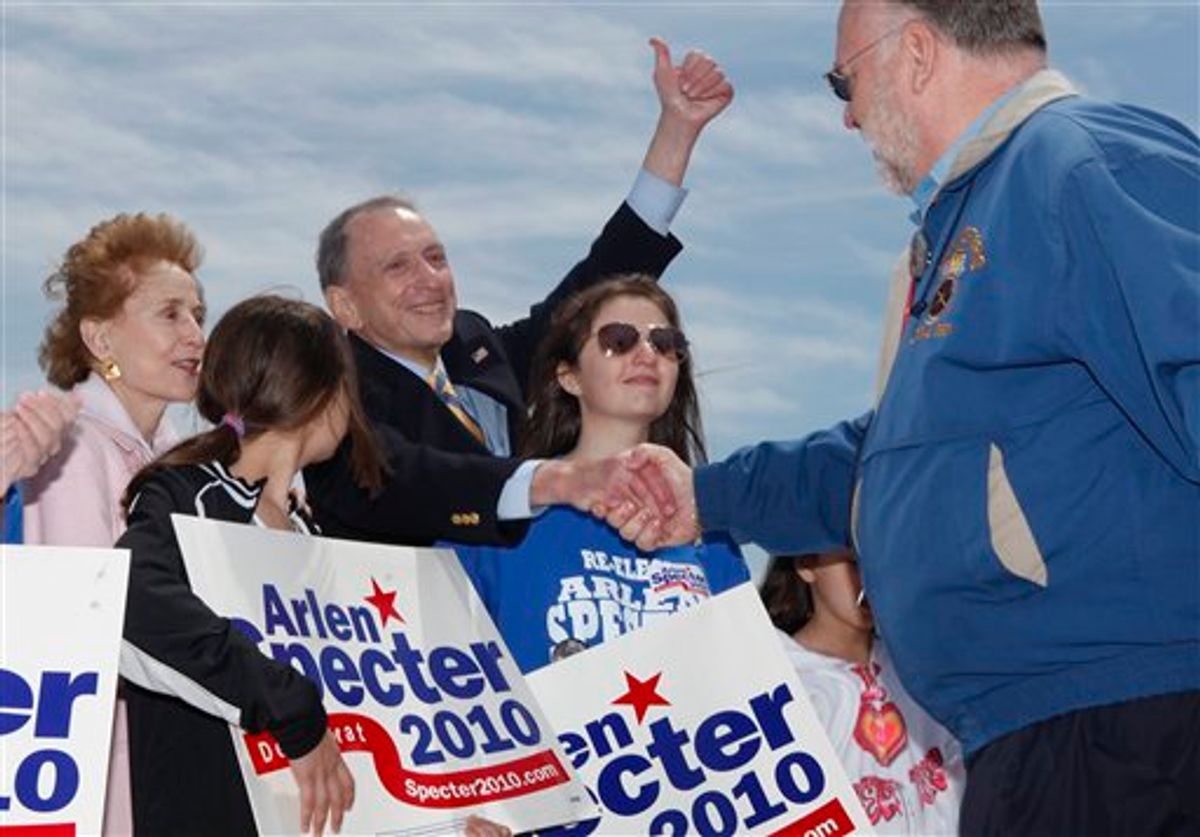 U.S. Sen. Arlen Specter, D-Pa., shakes hands with Danny Grace, right, Secretary-Treasurer of Local 830, during the Delivering for Pennsylvania: Upgrading the Port of Philadelphia campaign rally at the Packer Avenue Marine Terminal, Saturday, May 15, 2010, in Philadelphia. With Specter on stage from left are his wife Joan Specter, and granddaughters Lilli Specter and Silvi Specter. (AP Photo/Carolyn Kaster) (AP)
--

PHILADELPHIA -- The basic game plan for Democrats running in statewide Pennsylvania races has been more or less the same for years: rack up a big margin in Philadelphia (and, if possible, Pittsburgh); hang even or slightly better in the Philly suburbs; and hold on for dear life in the rest of the state -- the part James Carville once described as the "Alabama in the middle" between the two big cities.

As it happens, that's also more or less the game plan that Sen. Arlen Specter will need Tuesday against Rep. Joe Sestak, if he doesn't want to become a lame duck after the Democratic primary. Specter wants a big turnout in Philadelphia, where he's courting black voters. He needs to avoid getting steamrolled in the suburbs, where -- as a Republican -- he used to pick up crossover votes from Democrats, but where Sestak is well known from his four years representing a district based in Delaware County. And he needs to run decently in the rest of the state, which is why Specter's latest ad near Pittsburgh rips Sestak for favoring an assault weapons ban (which is not an issue you hear the incumbent talk about much in Philly).

For Sestak, the equation is basically flipped -- he needs low turnout in Philadelphia, especially among infrequent voters, a big margin in his House district and a strong performance elsewhere. At his campaign headquarters in Media, Pa., Sunday, volunteers were calling voters and telling them Sestak was running against "longtime Republican Arlen Specter," hoping to play up Specter's party flip among die-hard Democrats.

So if you're watching the returns come in Tuesday night, here are some numbers to keep in mind. In 2008, when the presidential primary between Barack Obama and Hillary Clinton drew a far larger turnout than this contest is expected to, Obama won only seven counties -- but because of where they were, that only translated to a 9-point loss. Those counties were Philadephia, where Obama racked up 65 percent of the vote; Delaware and Chester, two suburbs that are in Sestak's base this time around; Lancaster and Dauphin, near Harrisburg, the state capital; and Centre and Union, near State College, Pa., where Penn State's campus gave Obama a boost. Some of those areas may be Sestak hotbeds this time around, though, if white liberals from the rest of the state -- a key part of Obama's coalition in 2008 -- desert Specter.

Two years ago in the primary, Philadelphia accounted for just under 19 percent of the state's total vote. Obama won the city by 134,429 votes, but lost the state by 213,598 votes. By comparison, in 2002 -- when Ed Rendell, then the Philadelphia mayor, ran in the gubernatorial primary against Bob Casey -- the city made up 23 percent of the state's vote total, and Rendell took in an enormous 78 percent of Philadephia ballots. He won the state by 162,000 votes -- and won the city by 163,000 votes.

Specter probably can't depend on that kind of Philly turnout or that kind of dominating margin in the city. But he's made his whole political career here, and as a member of the GOP, he always ran better in Philadelphia than other Republicans did. (In 2004, when John Kerry won Pennsylvania with 51 percent of the vote, he took 80 percent of the Philly vote; Specter, meanwhile, grabbed 28 percent of the city's vote against Democrat Joe Hoeffel, running 9 points stronger than George W. Bush did.) Which is why counting Specter out before the votes are tallied may be risky, no matter how bleak it looks for him now.