Will Rand Paul run for president in 2012?

Ron Paul's message has never been stronger in the GOP. But he'll be 77 years old in 2012. How about his son? 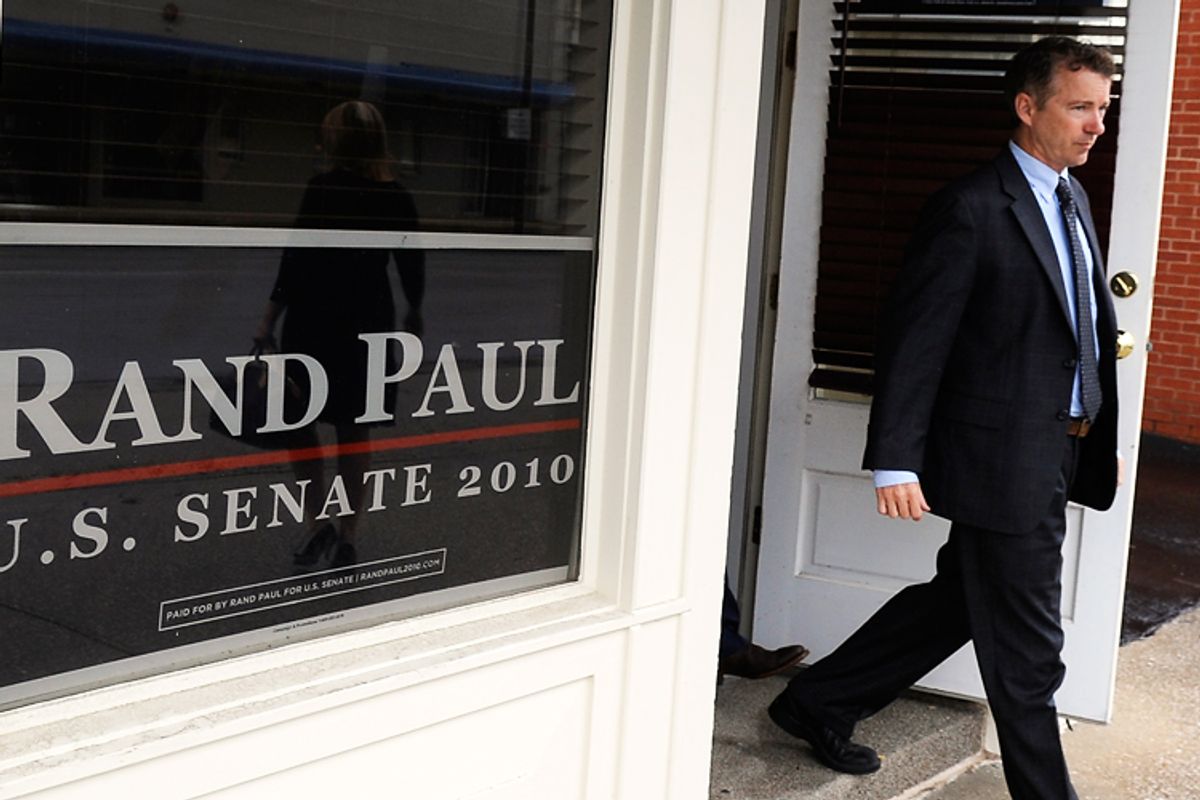 It's only after November that the suspense will begin, on two fronts.

The first involves ceremony: Would a miffed Sen.-elect Paul, who has been actively opposed in the GOP primary by Mitch McConnell, defy the Senate tradition that calls for incoming senators to be accompanied at their swearing-in by their state's other senator? There would be some precedent for this: After winning an upset victory in 1990, Paul Wellstone refused to be escorted by Minnesota's other senator, Dave Durenberger, instead asking former Vice President (and Minnesota Senator) Walter Mondale to do the honors. Might Paul snub McConnell in favor of, say, outgoing Sen. Jim Bunning (who has backed Paul)?

The real suspense, though, could involve the 2012 presidential race, and a simple question: Will Rand run?

Yes, on the surface this is a silly idea. The 47-year-old Paul has no previous experience in government or politics and will, in '12, have been a senator for just two years. Plus, given the realities of modern presidential politicking, he'd essentially need to begin campaigning a few months into his freshman term.

But when you look closer, it starts to make sense, for two basic reasons: 1) The political atmosphere has never been more favorable for Ron Paul's brand of libertarianism; and 2) Ron Paul himself will be 77 years old in 2012. In other words, the old man may not feel like spending another two years of his life running around the country, but with a son in the Senate, he'd have someone to pass the torch to.

In 2008, Ron Paul managed to mount a surprisingly credible campaign, raising astounding sums of money and nabbing around 10 percent in Iowa and New Hampshire. He never seriously threatened to win the nomination, though, and finished with only a handful of delegates, despite staying in the race until the bitter end.

This was all in the, pre-Wall Street collapse, pre-TARP, pre-President Obama Republican Party. In the last two years, Ron Paul's message has found wider resonance in the GOP, fueled by deep grass-roots anger at Washington and Wall Street -- enough that he was able to win February's CPAC straw poll.

This is still probably not enough to bring the elder Paul very close to the GOP nomination. Simply put, he's still too much of an oddball, and his non-interventionist foreign policy makes him flatly unacceptable to the formidable neoconservative wing of the GOP. This is why there was widespread booing at the CPAC convention when his victory was announced.

But Rand Paul, as Salon's Ben van Heuvelen pointed out last week, is a far more capable politician than his father. He's a natural speaker who knows how to connect with crowds, and he's shrewdly insulated himself from neoconservative attacks. As Ben observed, he's pulled off a remarkable feat in Kentucky: uniting his father's libertarian army with Rush Limbaugh's Dittoheads in a coalition that the party establishment has been powerless to stop. If he could even begin to replicate that Kentucky formula on the national stage, Rand Paul would be far more formidable than Ron Paul ever was or ever could be.

And 2012 may be the best shot that Rand Paul ever gets. With all that's happened in the past few years, there will probably never be this much room in the GOP for an authentically libertarian candidate. Don't look for Rand Paul to even acknowledge this between now and November. That's no way to run for an open Senate seat. But after November? Don't be surprised if he does.