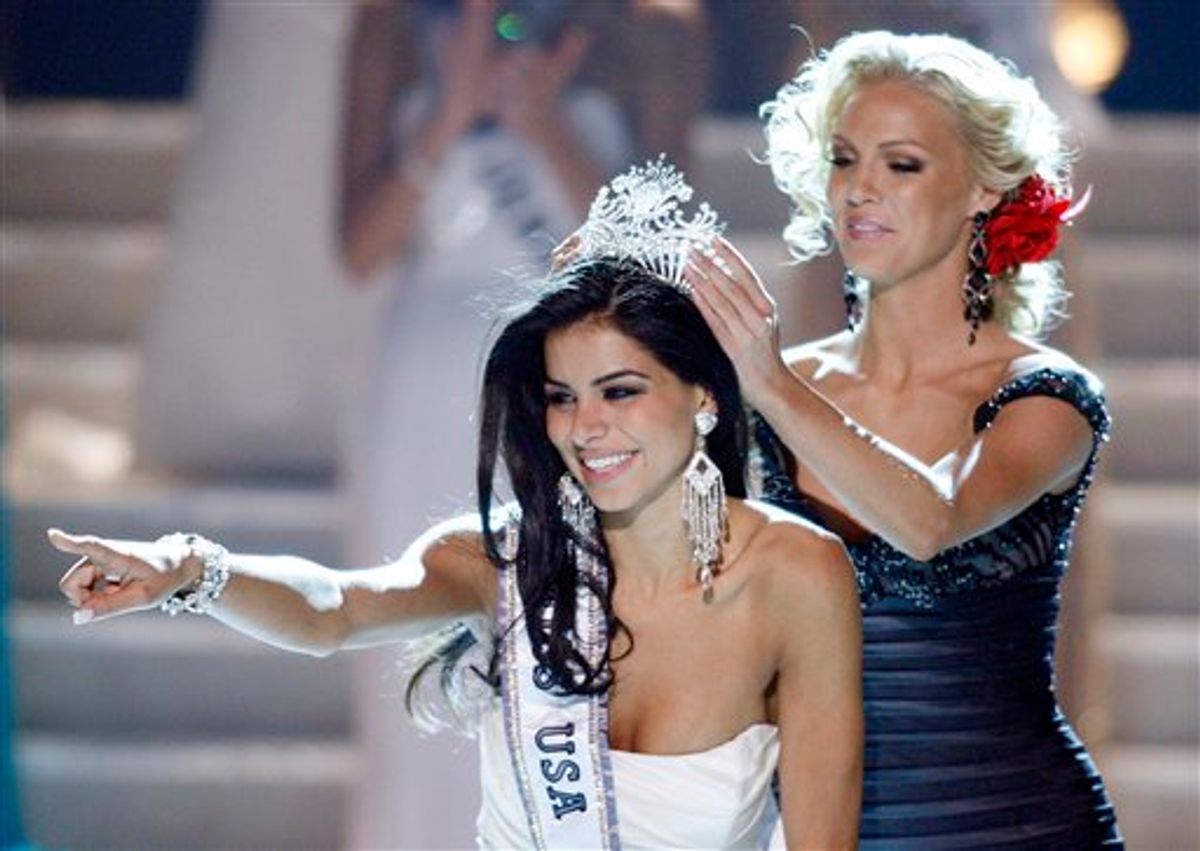 Arab-Americans rejoiced Monday over the crowning of raven-haired beauty Rima Fakih, a 24-year-old Lebanese immigrant from Michigan, calling it a victory for diversity in the United States, especially at a time when Arabs suffer from negative stereotypes in this country -- and anti-immigrant sentiment is in the news.

Meanwhile, some harsh critics wondered if Trump's Miss USA organization was trying to send a message, sniping that the victory amounted to "affirmative action," or implying the first runner-up, Miss Oklahoma USA, suffered unfairly because of an answer she gave supporting Arizona's new immigration law.

All this comes, of course, a year after 2009 runner-up Carrie Prejean and her views on gay marriage dominated the headlines. Suddenly it seemed like the pageant had become a battleground, albeit in bikinis and flesh-baring gowns, for the hot-button political and social issues of the day.

If all that weren't enough, photos emerged of Fakih pole-dancing in skimpy shorts and a tank top in a radio show contest in 2007. The show's producers said they'd been contacted by representatives of the Miss Universe contest requesting more photographs and information. But the show also noted -- correctly -- that the photos were no more provocative than anything on the Miss USA website.

In any case, Arab-Americans were elated by the victory of Fakih, who was born into a powerful Shiite family in southern Lebanon and whose family said they celebrate both the Muslim and Christian faiths.

"With all the stigma that goes around -- especially after 9/11 and how people portray Muslims and Arab-Americans -- it's just a great way to knock down all those barriers," said Dewnya Bakri-Bazzi, 22, a Muslim law student from Dearborn, Mich., who uptated her Facebook status to read, "woot woot who knows maybe I can be the next Miss America?"

Abed Ayoub, the legal director for the Washington-based Arab-American Anti-Discrimination Committee, called the win significant. "It shows our country's diversity and the opportunity it offers all citizens."

He decried the negative blog postings as "disgusting."

"Rima had a great event," he said. "Her religion and race was not an issue during the competition, and I hope not during the judging either. She won on beauty, elegance and eloquence."

Not that Fakih and her family hadn't been prepared for negative publicity. Even before the pageant, Ayoub said, when Fakih had won her state pageant, his group had helped prepare the family.

"We told the family they should expect this," Ayoub said. "We told them that some people spew hatred. But she was strong. She held her ground."

Pageant officials said their records were not detailed enough to show whether Fakih was the first Arab-American, Muslim or immigrant to win the Miss USA title. The pageant started in 1952 as a local bathing suit competition in Long Beach, Calif.

A winner in the 1980s may have had a Lebanese parent, Ayoub said, but having a winner of Arab descent was exceedingly rare nonetheless. The group's regional director in Dearborn, Mich., Fakih's hometown, said the victory was especially sweet given the current political climate.

"We did not choose to be in the hot seat," Imad Hamad said in a telephone interview. "But the tragedy of Sept. 11 put us in the hot seat and imposed a new reality. Also, we have the background of anti-immigrant sentiment, in Arizona, and efforts by some to pass a similar law in Michigan. So this victory is a reaffirmation that America is America, the land of the brave and the land of opportunity. Rima now she can be a role model for all our young people."

Some noted that Fakih had stumbled when, in a question about birth control, she called it a "controlled substance." And she nearly stumbled, quite literally, on her gown because of its long train. But she stayed upright.

As for Morgan Elizabeth Woolard of Oklahoma, she was asked a question -- by actor Oscar Nunez of NBC's "The Office" -- about Arizona's new immigration law. She said she supported the law, which requires police enforcing another law to verify a person's immigration status if there's "reasonable suspicion" that the person is in the country illegally.

"I'm a huge believer in states' rights. I think that's what's so wonderful about America," Woolard said. "So I think it's perfectly fine for Arizona to create that law."

Conservative bloggers like Michelle Malkin suggested the question was a trap. The pageant's judges, who included skater Johnny Weir and NBA star Carmelo Anthony, were unavailable for comment Monday, as was Trump, whose office said he was too busy to speak about the pageant.

Fakih was born in Srifa, a village in southern Lebanon that was heavily bombed during the 2006 Israel-Hezbollah war. She moved to the United States with her family in 1993 and attended a Catholic school in New York. Her family moved to Michigan in 2003.

Her sister, Rana, who moved back to Lebanon a few months ago for a new job, said she had spent the night exchanging messages with her father, Hussein, and another sister, Ruba, who were attending the competition.

"It was a beautiful surprise," she said from Srifa. "It was not easy for Rima to reach this title. We're very proud as Lebanese Americans and as Lebanese that Rima reached this point despite all the pressures and stereotyping about Arabs and Lebanese. She made it. She fought and reached her goal."