Why I'm not surprised by Arizona's racism

My home state's law may be shocking to some, but not to people of color like me, who grew up haunted by prejudice 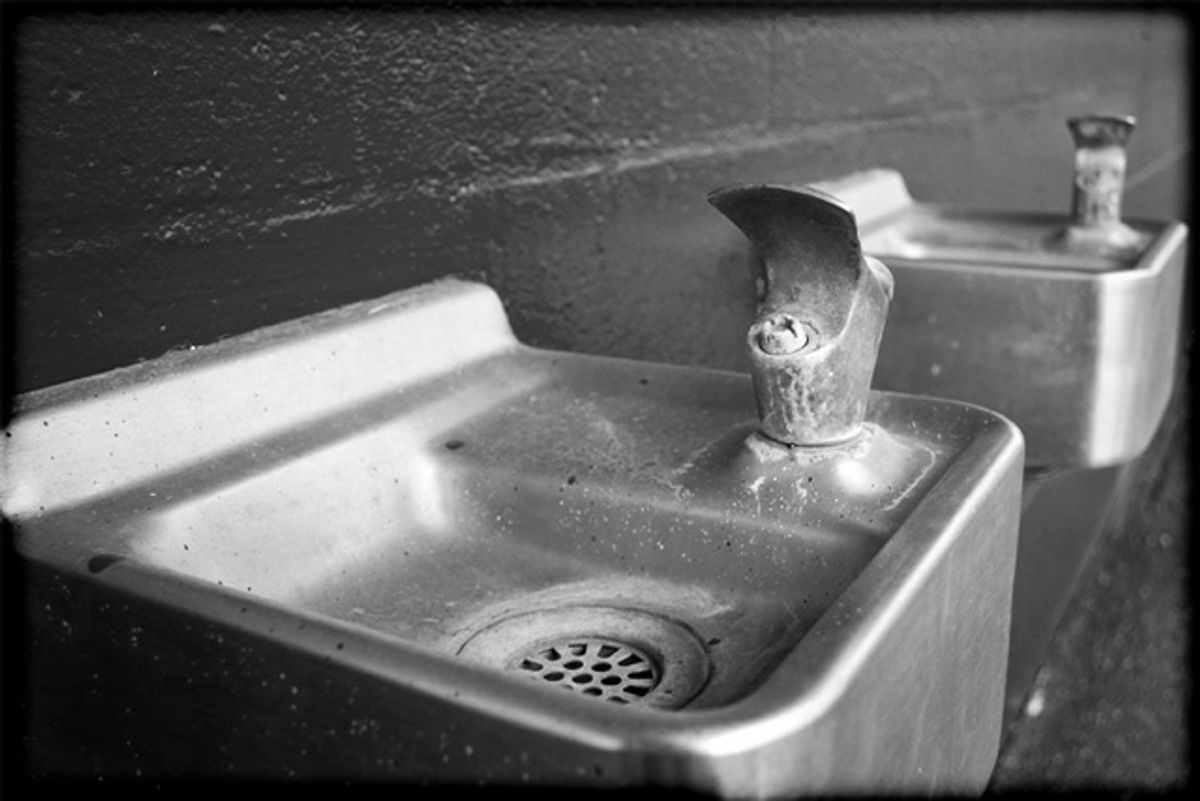 As someone who's lived in Arizona for over 20 years now, I'm not shocked by the recent immigration law. Partly that's because I know how common profiling is here on the border. It's not controversial in these parts; it's just how it is. It's a practice as old as, well, Geronimo.

But I'm also not shocked to see the supposed resurgence of racism in America -- aimed, many feel, at Hispanics rather than African-Americans. Many people of color my age, who grew up constantly aware that they were in real danger, every single day of their lives, are difficult to shock. We've lived through so many varieties of racism that we're slightly amused anyone really fell for that "post-racial" America stuff being bandied about during the Obama campaign. That bubble burst pretty quick, huh?

Chris Rock once quipped that he saw America as that rich uncle who put you through college after he'd spent years molesting you. After I laughed myself sick, I realized: That was no joke. My relationship is exactly that. I've gotten everything from this country that I could've wished for and then some; when I travel outside of the States I am aware of how truly well off I am. But I'm scarred soul deep, too. It's hard to resist biting the hand that feeds me some days. Just to even the score some.

I grew up on Chicago's South Side -- born in the pre-civil rights movement '50s to parents who'd made the Great Migration from the South a couple of decades earlier. My first neighborhood is known for its blues joints and as the birthplace of many future civil rights  luminaries and legendary entrepreneurs, from the still well-known Johnson family to my own godfather, Dr. James Scott, who built the first black hospital in the city.

In fact, my fifth grade teacher was Emmett Till's mother -- you may remember him. He was lynched for whistling at a white woman. His body was pulled from a river somewhere, bleached white and bloated -- he looked like a beluga whale in the awful photos splashed across the front pages of the black newspapers in our neighborhood. She kept a photo of him on her mantel to remind all who entered. And told her students that picture was a symbol of the ignorance she was sending us out into the world both to deal with and to change.

We had some amazing role models. But it was still an incredibly dangerous place. My baby sitter was raped in the alley behind our house. I routinely ran home from school terrified by rumors that two of the local gangs were going to be fighting it out after classes. And we did indeed arrive back at school more than once to find it tagged beyond recognition -- windows broken, halls full of trash and furniture, playground equipment destroyed.

Our families were fierce. Always on guard. It's true that every adult on the block had permission to reprimand or even spank each other's children. These were people who'd left the lynchings in the South only to land in neighborhoods where they had to shelter their children from people of their own color, too. We strolled past every porch mindful that one false move might mean hearing those dreaded words: "Go pull me a switch off that tree yonder and come on up here!"

Those of you who know what a "switch" is may also remember what it felt like to be whipped with one. Child abuse? Probably. But these were people who'd seen people they knew dangling from trees by ropes. My own mother had watched her uncle beaten senseless -- and left half paralyzed for life -- by "paddy rollers" as she called them. That's a slave term for the men who used to keep the slaves in line. And it seems even more wrong for those who'd been beaten to perpetuate the practice. But remember, also, that they were deathly afraid that we would act out in the wrong place at the wrong time and wind up as dead as those long-lost relations. It was the only way they knew of making it clear just how dire our circumstances truly were. We got the message.

In fact, one of the toughest lectures about being late for school that I ever got was from a guy I'm sure those adults would've warned me away from. He was clearly addicted to drugs or drink, and he caught a bunch of us in the wrong place on State Street one morning. He glowered, red-eyed like a "Twilight" vampire, as he stumbled toward us. I was too afraid to run. But he pointed a skeletal finger our way, and said, "You wanna be me?! You wanna be out here scrapin' and beggin' like me?! You bet' GIT on outta here -- gon' to school like you got some sense!"

We ran a few blocks and got on the next bus. And I do not remember ever trying to ditch school again after that.

They were preparing us, in their own way, for the world beyond those porches. It was inhospitable in ways that I, as a child, couldn't explain but clearly felt. I can still remember when it was distinctly uncomfy to walk Michigan Avenue, or to enter cool, classy Marshall Field's. Or even to stand at the bus stop in certain parts of the city, waiting to transfer to the bus that would take me back to my side of town.

My mother deliberately put me into piano and composition classes downtown as a baptism by fire. I had to sit and play with children of other cultures every Saturday for hours, while she herself kept well away, unable to shake off her childhood traumas enough to truly interact with white people for more than a few very courteous minutes at a time. She dropped me off, went shopping at the southern end of State Street, and then picked me up again later. I began to run off with my new friends on occasion, to explore this strange world alone. That was what she wanted and feared, both. It was interesting watching her deal with that dichotomy. She wanted me to be in that world, but she was afraid it would hurt me, too. I bless her for it. It took its toll on her, that dance. But she let me do it. And it made me fearless.

She and my father had also taken me South every single summer of my preteen years, for much the same reason as my mother had started those piano lessons. The racism up North was subtle. It was possible to forget sometimes that people were watching you shop in a way that they didn't watch white people shop.

Not so down South, or even on the ride down South. I remember that Cairo, Ill., was the last place we could stop to "relieve" ourselves -- but only before dark. A little farther north we could do that in rest rooms. Once we got to Cairo, we could only walk out into the trees somewhere. And we had to be quick about that. My father would warn me, once we'd gone, not to ask again once we'd gotten back on the road. "We will not be stopping until we get to Historia's house," he would tell me.

And I remember that when we got to my grandmother's house in Mississippi, we also had to beep the horn in a certain way. Not doing that could have meant being shot by one of her hunting rifles as we pulled up. She was there, too, when my mother's uncle had been beaten so badly. She'd grown up hiding under floorboards and such whenever a strange buggy or car came toward the house. And she was a damned good shot, too. She'd start with a headlight and work her way down to the tires.

On one of my first trips down, as a wee one, I stepped up on a little stool to take a drink from the wrong fountain. I couldn't read signs. And I was too tiny -- and, in my way, too smart -- to drink from the grungy looking black one. But the clean white one had a stool for kids, so that's where I went.

And the entire women's clothing department went silent. People of both colors froze like statues.

My mother walked over at a normal rate of speed, but I could tell from the smile frozen on her face that I had done Something Very Wrong. She did not apologize. She did not run. She took my hand and said, "Sweetie, let's go to another store."

The white clerks gave her approving glances. And we left without any more drama. Making sure to get off the sidewalk or cross over if a white person approached on the same side of our street as we went. We never got to eat at the soda fountains and things as we would've while shopping back home. My father, having made that mistake a few times, had a little quip he used if told that the place he'd entered didn't serve "colored people."

But my dad looked like Billy Eckstine, the crooner extraordinaire of his day. And he had this really smooth way of winking and heading for the door that made them laugh instead of reaching for the club under the counter.

I myself forgot these protocols often on our visits. If a white person asked me how I was doing, I'd say, "Just fine!" And they'd stare and stare and then ask, "Just fine what?"

Sometimes to be unctuous (as my aunts called it), I would say, "Just fine ... thanks!"

I could not form my lips to say that. I just couldn't. I do sometimes wonder why I wasn't washed up on a shore somewhere looking like a beluga whale. But I survived those summers. And a decade or so later, we became black and proud. The whole world seemed to be working on "our" problem. It felt scary good. And, for a time, hopeful.

But we never truly came to grips with racism in America. I have no answers. I only know that even after all these years and all of my myriad achievements, I am still very aware of the danger that lurks. Of the menacing glance that may mean, "RUN." Of the disdainful glance that just means, "STRUT. And teach 'em somethin'."

I grew up with it.