Can a backroom deal on bank reform be stopped?

The legislative dance is more transparent than ever. But that doesn't mean tough new rules on derivatives are safe 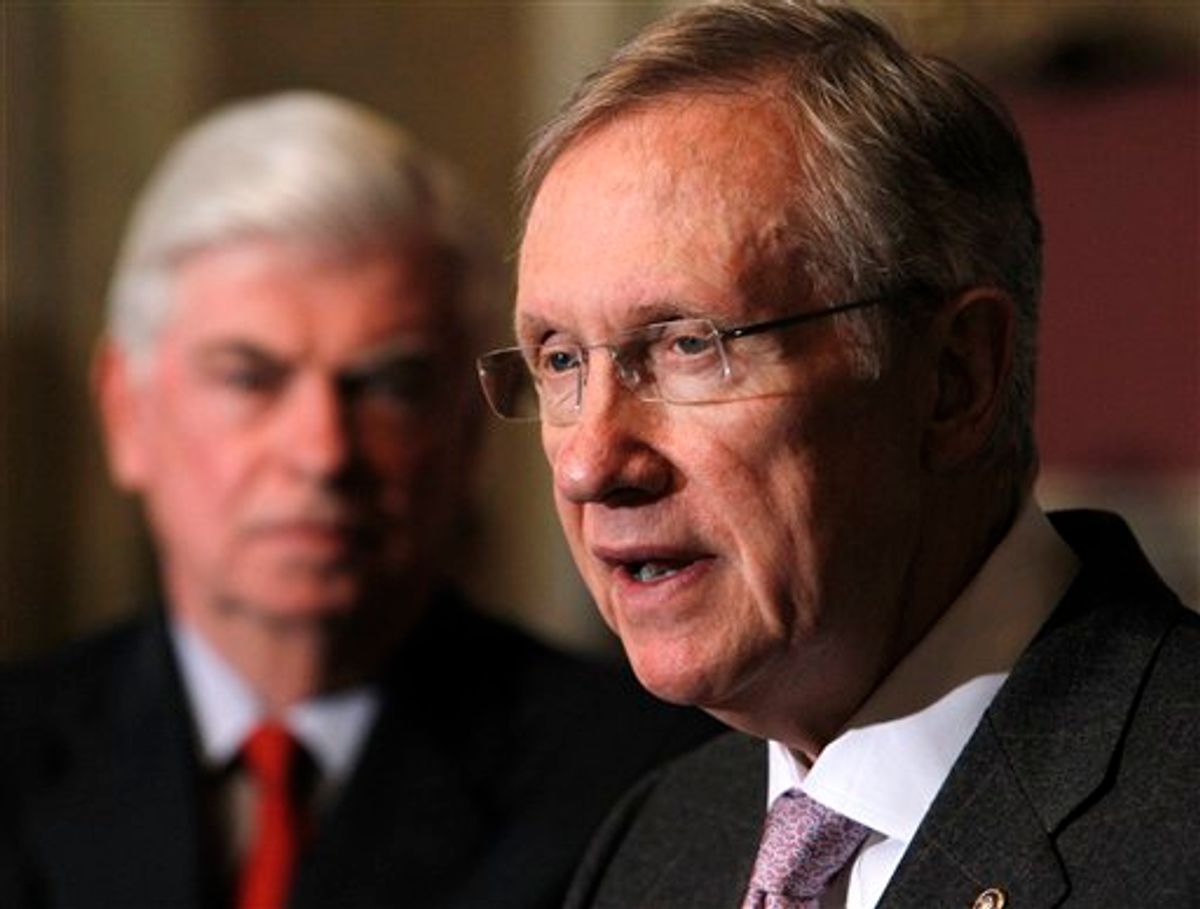 Harry Reid has filed for cloture on bank reform, meaning that a final vote on the Dodd financial regulation bill, as amended after several weeks of Senate debate, could happen this week -- possibly even as early as Wednesday. That prospect seems a bit unlikely, however, given that there is some significant work yet to be done on one of the critical issues left remaining: how to properly regulate derivatives trading.

Republicans, the White House, Sen. Chris Dodd, the banking industry, and even former Federal Reserve Chairman Paul Volcker all think the Lincoln language goes too far. But according to one popular theory, the Senate has decided to take no action to loosen her rules until after today's Arkansas Democratic primary, in which Lincoln is attempting to fend off a challenge from the left by state Attorney General Bill Halter. The scuttlebutt Tuesday morning was that Sen. Dodd and Sen. Richard Shelby, the Senate Banking Committee's ranking Republican, were busy cooking up a "manager's amendment" that will do the dirty work and be voted on at the last minute before a final vote on the bill. Failing that, there's always the chance that significant changes could be made during the conference process when Senate and House negotiators reconcile the varying language in their bills.

Paul Volcker, the originator of "the Volcker rule," believes Lincoln's proposal interferes with legitimate derivatives trading on behalf of bank customers. His proposal would allow banks to continue to buy and sell derivatives for clients while preventing them from speculating in derivatives for their own profit using depositor money guaranteed by federal insurance. However, as it currently stands, the Dodd bill only requires that regulators study whether the Volcker rule would be a good idea and then make a decision as to whether to implement it.

Thanks largely to the emergence of the blogosphere, we, the general Internet-connected public, have a greater ability to track and understand the legislative process than ever before. The incredibly detailed coverage of every twitch in the year-long struggle over healthcare reform served as Exhibit A of this new reality. Bank reform is Exhibit B.

Consider Merkley-Levin. On Sunday, the New York-based finance lawyer who writes the blog Economics of Contempt blasted the Merkley-Levin proposal as completely unworkable.

Zach Carter at the Huffington Post, Mike Konczal at Rortybomb and, unsurprisingly, Merkley's office promptly disagreed, with varying degrees of vociferousness. Read all four posts and you will feel pretty informed. Personally, Volcker's support and the banking industry's intense opposition clinch the deal for me. I'm looking forward to the vote on the amendment -- judging by the Senate's track record over the last couple of weeks, it might even pass.

So far, almost every step of the process of creating new derivatives legislation has been remarkably public, and I would argue that the constant glare of attention from the Internet-enabled masses has gone a long way toward defeating lobbyists' attempts to cut a backroom deal. The lobbyists don't like the Volcker rule, don't like Merkley-Levin, and hate, hate, hate Blanche Lincoln's ban. But with a majority of senators mindful of popular sentiment against Wall Street, and a universe of bloggers and reporters tracking every blip on the financial radar, lobbyists are finding themselves, so far, relatively powerless.

And yet, here we are at the endgame, and we don't really know whether all that transparency will finish the job. We know that Dodd and Shelby are working on their mysterious manager's amendment even now. We know that pressure from lobbyists and the administration will be intense during the conferencing process. We know that sometime this week, or maybe next, the rubber will hit the road. And it's worth asking, what good will all the clarity and transparency that the process has enjoyed up to now end up being worth, if at the last minute a backroom handshake seals an undemocratic deal?

UPDATE: Republicans appear to be doing their best to block any further votes on "controversial" amendments.

LATER UPDATE: The fix is in: Dodd offers his own amendment that would "delay implementation" of the Lincoln plan.