Is it a parody, or just old-fashioned social networking silliness? All I know is: It's great 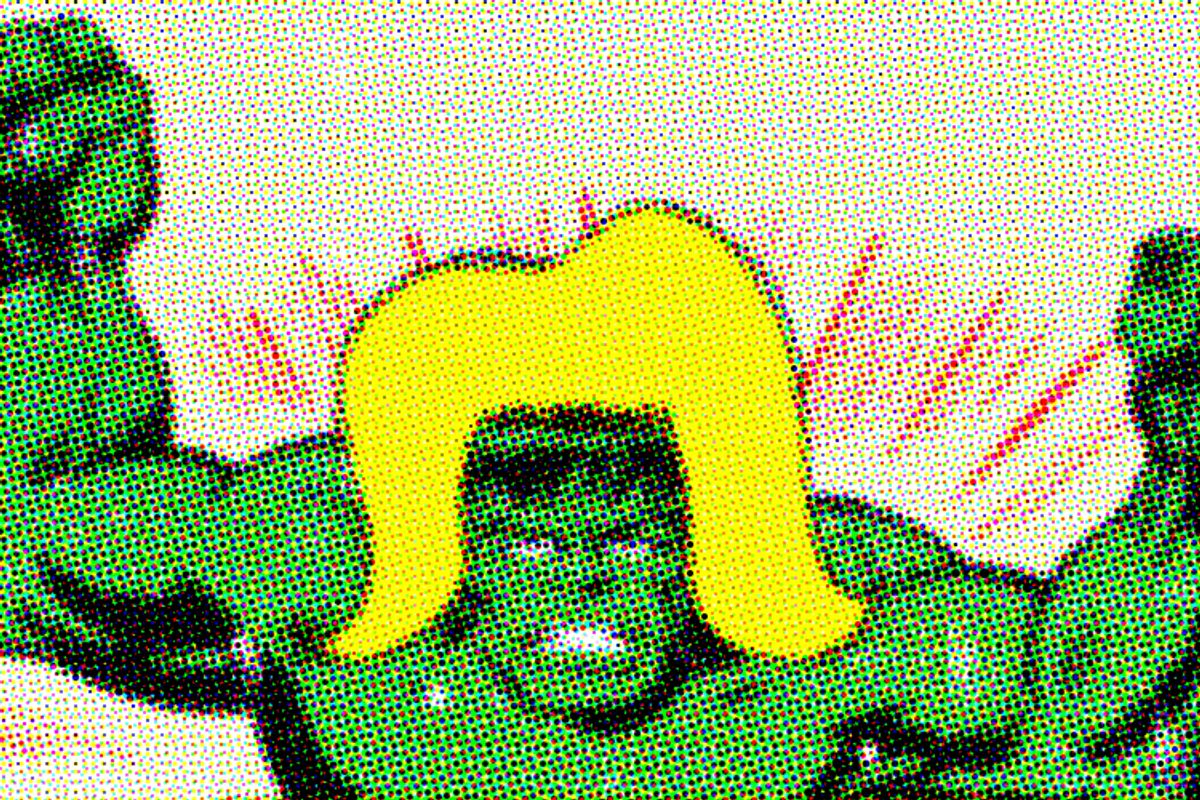 This is not really the icon for Feminist Hulk.
--

As a recent (ambivalent) Twitterer, I've learned a bit about the fake and funny characters that populate the social networking site. I've developed affection for the culinary mash-up Ruth Bourdain, who mocks former Gourmet editor Ruth Reichl’s excessive appetites with the debauched flair of Anthony Bourdain; I also read an imaginary version of my former boss, former New York Observer editor Peter Kaplan, whose eruptions of absurdist, Segway-propelled rage have become popular even among those who may never have met the actual cranky Kaplan. But my new favorite Twitter persona is definitely Feminist Hulk, whose bio reads, "HULK SAYS FUCK PATRIARCHY. HULK HERE TO SMASH GENDER BINARY."

Feminist Hulk’s Twitter avatar (too small to be used here, unfortunately) is a picture of Bruce Banner’s verdant alter-ego charging forward holding a copy of Judith Butler’s "Gender Trouble." (Feminist Hulk's early tweets, which include the assertion "HULK THINK JUDITH BUTLER IS THE SHIT" and a twitpic of Butler speaking under the Internet in-joke "Gender: Yer 'Doing' It," prompted me to briefly entertain the fantasy that Feminist Hulk is Judith Butler, but life is rarely that perfect.)

On Twitter since May 11, Feminist Hulk claims to live in San Francisco (obviously), and types in all caps, since "HULK CHOOSE NOT TO IMPOSE HIERARCHY ON LANGUAGE. PLUS, BIG HULK FINGERS MAKE SHIFT-KEY PROBLEMATIC," though in a later tweet, Feminist Hulk amended, "HULK MAKE CAPITALIZATION EXCEPTION FOR bell hooks. HULK LOVE HER ESSAY ON MADONNA AND RACIST APPROPRIATION."

The Hulk-y all-caps thing puts Feminist Hulk in line with a small contingent of other tweeting Hulks, including Real Hulk, DRUNK HULK (who comes with a Cliffs Notes translation) and Feminist Hulk's friend, the like-minded XDRESSINGHULK, who recently offered Feminist Hulk a "HULK FISTBUMP IN RADIOACTIVE ANTI-PATRIARCHY SOLIDARITY" when Feminist Hulk got linked on Feministing, and who, upon reading of the California gay couple forcibly separated by local authorities, put the Hulk persona to perfect, poignant use by tweeting,"HULK SMASH PUNY BIGOT REDNECKS! ... AND YOU CALL HULK MONSTER?"

Despite girl-power posts like "HULK NOT AFRAID OF GLASS CEILING. HULK EAT GLASS FOR BREAKFAST," Feminist Hulk, who questions "CULTURAL PRIMACY OF SEXUAL DIFFERENCE, BUT RESPECT FREEDOM TO SELF-IDENTIFY IN CONVENTIONAL WAYS," seems to conventionally self-identify as male. At one point, he tweets, "HULK'S PENIS DOES NOT WANT TO CONTRIBUTE TO MASCULINIST HEGEMONY" and later, "HULK'S PENIS NOT THREATENED BY FEMALE EMPOWERMENT. HULK SMASH MALE PRIVILEGE INTO HEGEMONIC SHRAPNEL!" Hulk also correctly observes that "HEGEMONIC SHRAPNEL" would make a good name for a band.

Whoever Feminist Hulk is, she, he or it has been attracting a readership, with more than 3,200 followers as of Tuesday morning. All the popularity is not lost on the Feminist Hulk, who wrote on May 15, "HULK RETURN FROM DAY OF PARADIGM SMASHING TO FIND PLETHURA OF NEW FEMINIST ALLIES! HULK OFFER BIG GREEN HUG TO NEW FOLLOWERS!"

In some posts, it seems possible that Feminist Hulk is parodying certain feminist-y jargon and habits, as in the May 16 tweet, "HULK BAKE STRAWBERRY SCONES FOR MONTHLY FEMINIST POTLUCK. HULK KITCHEN SMELL WONDERFUL. DELICIOUS BERRIES FOR SOCIAL CHANGE!" and a post from the day before, "HULK DEVELOP HULK MUSCLES BY LIFTING (HYBRID) CARS."

But a respectful sense of humor with regard to feminism can be an awfully good thing, especially when it comes alongside Feminist Hulk's assertion that "FEMINISM IS THE RADICAL NOTION THAT WOMEN ARE PEOPLE, PEOPLE WHO SMASH PHALLOGOCENTRISM WITH (BIG GREEN) FISTS!"