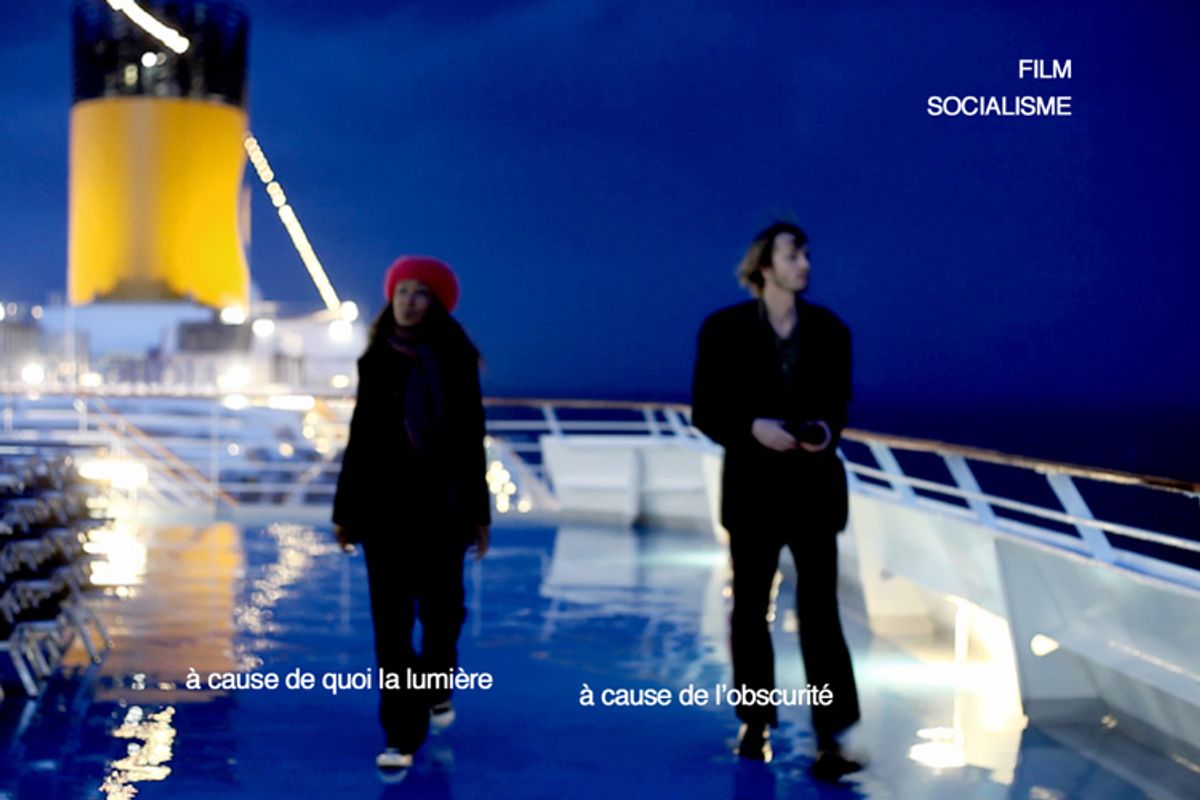 A still from "Film Socialisme."
--

CANNES, France -- Jean-Luc Godard's "Film Socialism" was so boring in theory that the British journalist sitting next to me fell asleep before it even started. Seriously. I glanced over at the guy during the opening credits -- which look amazing, and suggest once again that Godard would have made a great graphic designer or adman -- and he was pitched over in his seat, looking approximately as if he'd been shot. During the 100 or so minutes that followed, there was audible snoring in my section of the Théâtre Debussy, Cannes' second-largest venue, and a steady stream of walkouts, at least 50 or more in the aisles I could see.

What does that tell you? Nothing much, beyond two well-known facts: People at Cannes don't get enough sleep, and for the past 40 years or more the director of '60s French New Wave hits like "Breathless" and "Weekend" has had little or no interest in pleasing audiences who seek a conventional moviegoing experience. "Film Socialism" is a major news event here because it vividly demonstrates that Godard is still alive and very much doing his own thing at age 79 -- with the recent departures of Ingmar Bergman, Michelangelo Antonioni and Eric Rohmer, he is virtually the last big-name survivor of European cinema's golden age -- and because it's his first effort at something resembling a cinematic film since "Notre Musique" in 2004.

But like most of Godard's work since the late '80s, this really belongs to a different tradition: It's an abstract experimental film, a work of Pop-Situationist-conceptual art or a politically driven video essay. To say that "Film Socialism" is difficult to follow and politically inscrutable, and would drive most ordinary viewers to sleep or insanity, is to state the obvious -- indeed, it's probably to state that Godard has achieved his goals. It has an incomprehensible story, kind of, involving a Mediterranean luxury cruise ship and a family-owned gas station somewhere in exurban France (with a llama and a donkey housed on the premises). By stretching a point, you could say it's got characters and actors, in the sense that people show up on screen and say things. But it isn't trying to convince you with any kind of dramatic illusion.

Rather than telling us a story, Godard is trying, you might say, to implicate us in the story we are already telling ourselves. Between hypnotic, recurring shots of the ocean (not an aid to wakefulness) and oversaturated color video of tourists drifting around the cruise ship, he assembles fragments of recent European history. People recite brief, aphoristic excerpts of texts ranging from Shakespeare to Beckett, Heidegger to Hollywood historian Neal Gabler. Bits of movies begin to appear: "Battleship Potemkin" (the cruise ship docks at Odessa, where the most famous sequence in early cinematic history was shot), John Ford's "Cheyenne Autumn," Rossellini's "Journey to Italy," recent documentaries by Antonioni and Agnès Varda.

Godard seeks to seduce us with a beautiful, apparently nonsensical flow of images and ideas -- parrots! Cute-kitty videos! Discussions of geometry and Egyptian antiquities! A teen sexpot in a low-cut dress! -- and then ask troubling questions that wake us from the dream. Anyone familiar with Godard's career will recognize the themes that begin to emerge: the untold stories of World War II, the roots of the Arab-Jewish dispute in the Middle East, the relationship between Europe and Africa. Even something as seemingly meaningless as a luxury cruise (or as ordinary as a family-owned business) becomes, in Godard's view, an encounter with history, much of which remains purposefully hidden from us. It's unlikely, if not impossible, that any imaginable viewer could "get" all the themes and references in this film, and indeed I don't think that's what Godard wants or expects.

In case this all doesn't sound cryptic enough, did I mention that there are no English subtitles? It's true, or at least not in the ordinary sense. This was no France-centric mistake: In place of a normal, more or less literal translation, Godard supplies a sort of complementary keyword text at the bottom of the screen. If a cruise-ship character asks, between pulls on the slot machine, what became of the Bank of Palestine's gold when the British pulled out in 1948 (and I have no idea whether that refers to a legitimate question or a conspiracy theory), the subtitles might read: "British," then "gold," then "Palestine."

Maybe this is intended as a thumb in the eye of the English-speaking world, and maybe you need at least a middling command of French to get much out of "Film Socialism." On the other hand, maybe you don't: It's not like this film had any commercial potential to start out with, and its nature is such that any viewer in any country will have a personal, fragmentary experience. In between catnaps.

For much of the film's running time, I was at least as bored and irritated as my British neighbor -- perhaps more so, since I remained more or less awake. But eventually that weird breakthrough or epiphany happened, the one that you can get, if you're lucky, by sitting through a Tarkovsky film or a Wagner opera, the one where the counterpoint between aesthetics and ideas become a moment-by-moment state of rapture, and you totally stop worrying about the things you can't control or understand (e.g., what the hell this is actually all about).

I don't know that "Film Socialism" makes much of a case for socialism, or for that matter much of a case for film. It's already available for download from the French site Filmo TV, and its future around the world will almost certainly be in digital form. It's an old-fashioned left-wing European artist's puckish vision of new media, and it's exactly as exasperating, didactic, gorgeous and brilliant as that sounds. Some reviewers have quipped that Godard's four-minute YouTube trailer (embedded below) is at least as effective as the full movie, and they might be right. But those of us who stayed to the end of the press screening (maybe half the original throng) gave the film, and ourselves, a hearty round of applause: We were awake, after all.