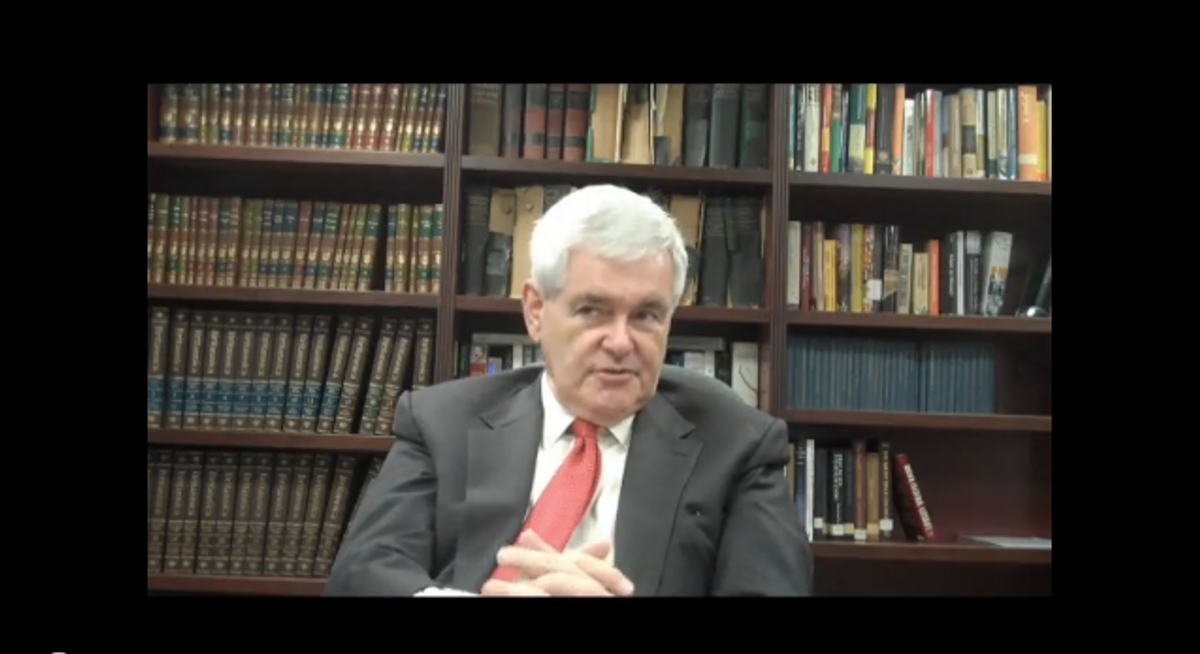 What do you think Tom Foley is up to these days? You know, the former speaker of the House of Representatives. What about Dennis Hastert? Don't know? Don't care?

Although the job is an important one -- indeed, the only specific member of the House with a constitutionally-designated special position -- it's still an ignominious fate that waits for most speakers. After all, although speakers might imagine themselves as national politicians, and counterweights to the president, they're only ever elected by one district. And, of course, the speaker is also elected by the House, which is a pretty consistently unpopular institution. No wonder Foley and Hastert faded away. There's just no public appetite for them, no avenue by which they might get into the national popular imagination and stay.

And this, I think, is the best way to understand Newt Gingrich's regrettable career since he left the House in the late 1990s. Gingrich has always thought of himself as a world-historical figure and leading intellectual light of his age. So he's built a whole way of life around not turning into Rodney Dangerfield. The very last thing he wants is the fate that probably awaits him in the end: berating rooms of ignorant kids about how he gets no respect. It'd be classic tragic irony if it weren't, in fact, pretty comical.

This weekend, Gingrich demanded twice that President Obama withdraw the nomination of Elena Kagan for Supreme Court, because she’s "anti-military" and in hock to Saudi Arabia or something. At the NRA convention in Charlotte, N.C., here's how he put it,

I say to the United States Senate, you do not need hearings. You know why she's not worthy of being a Supreme Court justice. And I say to the president: you have every right to nominate a liberal, but can't you, in the middle of a war, nominate a liberal who respects and works for our military, not someone who has contempt for them, and opposes them?

It's safe to ignore the details of Gingrich’s argument here. This stuff is misleading nonsense. All he's really doing is marking his territory as the GOP's most aggressive critic of Kagan. You might hear him braying about how Kagan is "anti-military," but what he's really saying is, "Remember me? I'm important." Funny -- he did just the same thing with Sonia Sotomayor.

In fact, this is just part of Gingrich’s broader campaign to gratuitously remind people of himself. He’s got a new book out, "To Save America: Stopping Obama’s Secular-Socialist Machine." Sounds like it really has a lot of fresh insight to add to the debate, doesn't it? And over at National Review Online, there's a half-hour of video just up, of Gingrich discussing the book and the weighty themes with which it’s concerned.

It’s basically all the hackish, dishonest clichés you think it is, dressed up in gossamer-thin pseudo-intellectual garb. Gingrich name-checks various books and concepts to make sure that you know that he reads, rather than to actually bring useful ideas to bear. He also keeps trying to claim that there is some profound political insight to be had in repeating Abraham Lincoln’s phrase "government of the people, by the people and for the people," in contrast to whatever we have now.

This really is a secular-socialist movement, in the case of Obama… the desperate desire to be a machine. And by machine, I mean, acquiring the power to impose on the American people… what the machine wants, without much regard to what people want. In sort of a very vivid contrast with Lincoln's vision of government of the people, by the people and for the people.

Obama, you see, "is so vividly clear in his socialist views -- again, I’m getting in some academic argument about Fabian socialism in the late 19th century."

Did anyone else have that kid in high school who learned words like "ontological" and started using them in every class, at every opportunity? See above. (Did you know he has a PhD? Well, he does!) Gingrich continues, "If you read the rhythm and language of Obama, there's a weird cross between Alinsky and European socialists, with an overlay of American pleasantness."

I'd be interested to know what the hell this is supposed to mean. Of course, the answer is probably "not much." After all, Gingrich’s definition of socialism appears to be so broad that it includes Obama economic advisers, who he says "have to believe in socialism," and even Henry Paulson, the former Treasury secretary and Goldman Sachs chief. "I believe in markets -- unlike Paulson, who thought he was running the world."

I think the best part, though, is when he makes an argument that Obama is fundamentally unpopular, and only won by tricking the American people.

Somebody ought to go back and look at, what was the mandate [in 2008] for? … Virtually everywhere, Obama said no one who earns over $250,000 will have any tax increase of any kind… the mandate’s for no tax increase. Then you look at cap-and-trade, which is a tax increase on everybody who uses energy, and you look at the health bill, which is a tax increase, you look at allowing the Bush tax cuts to lapse. How many fronts simultaneously can he break his word with us taking him seriously? I think it reduces him to being a very conventional politician, who in the Hugo Chavez tradition, didn’t mean what he told you.

Never mind, of course, that cap-and-trade, healthcare reform, and allowing the Bush tax cuts to lapse were all explicit centerpieces of Obama’s campaign. Also -- "the Hugo Chavez tradition"?

After all this incoherent bile, Gingrich tries to end on an upbeat note. "If you’re serious about meeting the challenges America faces in the next quarter century," he says, "you had better be for very, very bold change, and for, therefore, shaking up the existing institutional structure and the existing power structure, very dramatically. Because you can never get them to agree voluntarily to the change you need."

I'm as sure as can be that if Obama had said something like that, Gingrich would cite it as proof-positive that he's building a Chavista-Alinskyite-socialist-revolutionary machine.

So now that I've done the unfortunate thing of paying the former speaker the attention he hungers for, in order to show him to be a dishonest, pseudo-intellectual creep, I'd just urge that nobody pay him any attention, ever again. He's somehow convinced mainstream reporters, just by repeating it enough times, that he's the Republican Party's house intellectual. Lacking any compelling evidence of this other than a diploma, we should stop saying it. In fact, we should take a lesson from the mid-1990s: In his wars with the attention-sucking Gingrich, Bill Clinton was once reduced to insisting, "The president is still relevant here." Let’s all try to remember: the ex-speaker is not.