The war on children's playgrounds

By trying to make kids' spaces safe and risk-free, are we taking all the fun out of growing up? 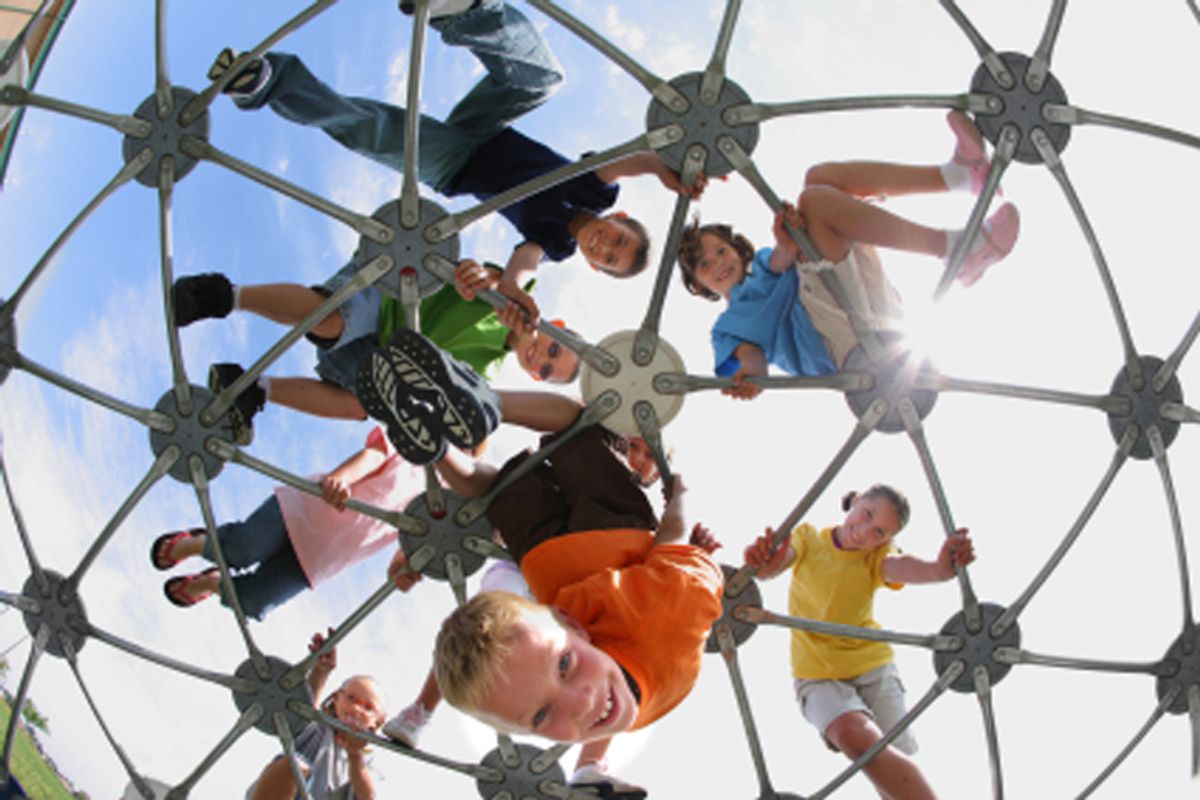 News flash: When metal sits out in the sun, it gets hot. Car-at-the-beach-in-the-parking-lot hot. This is something the creators of my city's brand-new, zillion-dollar Brooklyn Bridge Park evidently forgot, because its kiddie playground features three shiny domes, each slightly larger than a bean bag chair, made out of gleaming, steaming, sometimes screaming-hot metal.

So in come the crowds, and up go the wails of startled tots. Cut to fuming parents and terrible press. Hastily, the park erects some little tents to keep out the sun, but these are rinky-dink and don't do the job. And so, perhaps, the kiddie domes are doomed.

This would be ironic, because in their sheer, utter blobbiness -- the fact they have no moving parts, no sharp edges and aren't much steeper than a speed bump -- the domes would seem to be the safest, blandest playground equipment ever erected. They fit in perfectly in a child-rearing culture that demands a world without a single ouchie. The bubble-wrap zeitgeist. So maybe there's a lesson here: When we strive for too much safety, we get burned.

For the past 40 years or so, we have certainly been working to make our playgrounds safer than safe -- maybe even safer than fun. Seen an old merry-go-round lately? Or a swinging gate? How about a seesaw -- the kind without springs, where, when your so-called friend suddenly plopped you down, you felt it?

Didn't think so. The Consumer Product Safety Commission has issued reams of playground regulations and actually gone so far as to recommend against "tripping hazards, like tree stumps and rocks." Maybe we should just bulldoze the local parks and put in a couple of blobs -- this time, made of plastic.

The idea, of course, is that playgrounds need constant overhauling because kids are hurting themselves unnecessarily. But that depends on your definition of "unnecessary."

"Children rise to risk," says Joan Almon, executive director of the U.S. Alliance for Childhood. "Give them some genuine risk and they quickly learn what their limits are, and then they expand their limits." The problem is: If kids never encounter even tiny risks, they never develop that thing we call common sense.

Joe Frost is a professor emeritus at the University of Texas who has written 18 books on children's play. He has also spent the past 33 years observing children frolicking on the playgrounds he personally developed and keeps tinkering with at the Redeemer Lutheran School in Austin.

"There's a public school just a few blocks away and the principal told me they'd had two to three broken bones this school year already," says Frost. Meanwhile, over at Redeemer, "In three decades, we've averaged one per decade on our playground -- and our kids jump off 4- to 6-foot decks at a dead run. They play chase games all over the equipment, and all over the country you'll find schools that won't even allow it."

He's right. Schools have outlawed tag and other running games at recess. At my own sons' public grammar school, kids are allowed to run only around the perimeter of the yard, not anywhere in the middle. Too much chance for someone to get hurt! So how come Frost's 500 students aren't hurting themselves?

Frost says it's the same reason he and his buddies didn't hurt themselves too bad back when he was a kid playing in rural Arkansas: They developed a sense of how high and how fast it's safe to go. They learned how to protect themselves. They even learned how to fall safely. You can guess how a kid acquires that particular skill.

A playground that gets kids moving and grooving and growing and thinking requires a frisson of adventure. That's what Denmark realized during World War II: Kids actually preferred playing in the rubble of bombed-out buildings than on their regular playgrounds!

The Danes took that to heart and started erecting "adventure playgrounds," filled with "loose parts" -- aka junk. England adopted that model, too, and at one point London had 200 adventure playgrounds. It still has about 80, says Almon, and across Europe about 1,000 still flourish. Right outside of Zurich -- cleanest city ever -- she saw some three-story shanties looming in the distance: kid-built towers, on an adventure playground. "They look like they're going to blow over in the wind," says Almon. "But, of course, children use so many nails that when [playground workers] try to take down these structures so children can build more, they have to use chain saws."

Overseen but not overprotected by these workers, kids are encouraged to hammer, cut and climb. Not surprisingly, in America there are just two adventure playgrounds, one, in Huntington Beach, Calif., open only part-time. The other, predictably or not, is in Berkeley, and you have to sign a little guest book-qua-legal waiver when you go in.

Of course, it is the fear of lawsuits that has changed the American playground so dramatically. Take the case of slides. In 1978, a Chicago boy fell from a 12-foot slide and suffered brain damage. There is no sadder story, so you can predict what happened next. A 1982 article in Pediatrics recommended that no playground equipment be more than 6 feet tall. This makes sense only if you want to assure that no kid older than 7 ever gets excited about going to the park.

Thankfully, these height suggestions ebb and flow, and taller slides are allowed today, if they're properly enclosed, which sounds like a brilliant compromise: safe but still fun. Other playground regulations have been indisputably helpful, too. Who could argue with replacing asphalt with something soft and squishy? (Well, who besides New Yorkers, who have claimed that the city's playground mats are dangerously hot? The wise parks commissioner had basically this to say: Wear shoes.)

It's better, too, that screws are no longer allowed to protrude from playground equipment -- probably saved a tooth or two. And I don't like the idea of a kid getting his head stuck between two poorly spaced jungle gym bars any more than you do. But playground regulations have bloated to 51 pages, says Frost (who actually counted). Now that public playgrounds account for just three or four fatalities a year -- tragic, of course, but rarer than lightning deaths -- are the endless edicts really helping? If, for every kid who doesn't break his leg, millions more never develop the muscles to do a chin-up, or the endurance to play a game of tag, or any interest in playing outside, period, thanks to dumbed-down playgrounds: Is this really a good trade-off?

"It's as if we think that there's a world in which, if only people did things properly there would be no accidents, ever," says Philip Howard, author of "Life Without Lawyers." If only we built the perfect playground, no child would ever get hurt. But that's impossible. Risk is a part of life. Minimizing it makes sense. Trying to eliminate it means eliminating play, because when kids play, there is always the possibility they could get hurt.

What we're bequeathing our children is a childhood designed by lawyers. Just this past January, in Voorhees, N.J., a well-off suburb of Philadelphia, the city's insurers declared the town's wooden playground had to come down.

"It was a very popular playground," says Lawrence Spellman, the township administrator. "It was just big, and it had lots of nooks and crannies for hiding. Kids loved it. We didn't want to take it down at all." But down it came, because, even though it was built in the '90s, it didn't meet the latest requirements.

Goodbye, crannies. And goodbye to a whole lot more playground staples, across the country. Julia Chen, owner of the Playstore in Palo Alto, says all the sand was recently removed from her local playground, replaced by wood chips. (Anxiety about sand comes from the fear that cats are using America's playgrounds as litter boxes -- which, by the way, is an urban myth.) Meantime, here's the sign at fun-lovin' Piers Park in East Boston: "Bicycle Riding, Roller Skating, Skate Boarding, Ball Playing, Kites, Scooters, Wheeled Toys, Swimming, Fishing, Fires, Barbeques, Alcoholic Beverages, Glass Containers, Animals and Unlicensed Vendors are Prohibited."

So I guess that leaves ... napping?

Geralyn Bywater McLaughlin, director of the group Empowered by Play, was just at that park with her twin 6-year-olds, "and they were having so much fun," she says. "We brought along our scooters and we were leaving and a police officer popped her head out and said, 'No scootering!' I was shocked and the police officer laughed and said, 'We have so many rules you really can't play here.'"

Ha ha. Really funny. What's amazing is that even with all these safety precautions, many parents have so absorbed the Playground = Danger mentality that nothing is safe enough. Jonathan Hoch, a financial planner in Lincoln, Mass., takes his two kids to the playground and can't believe his eyes. "You have parents going up on these children's catwalks, children's slides, just all over these structures and tubes and so forth, following these kids with outstretched palms as if the kids are going to fall off and kill themselves. Why do you suppose we have these mental-case parents?"

Because we have a culture that is constantly telling us that no risk is tolerable. This month's issue of Parenting lists "4 Easy-to-Avoid Playground Hazards" -- as if the playground is teeming with doom. Tip No. 3: "The National Program for Playground Safety doesn't recommend spiraling, twisty slides for kids under 5. If yours can't resist a souped-up slide, stay close by as she goes down, or slide on it with her."

Guess what? That's what a 63-year-old did in the wooden Voorhees park before insurers insisted it be torn down. She hurt her ankle and is suing for $2.5 million.

So is there any hope we can come to our senses? Accept that life involves risk, and somehow lure our kids back outside (and maybe lure their guardians off the playground equipment)? Surprisingly, yes.

A big ray of hope is beaming from -- get this -- Brooklyn Bridge Park. While the kiddie area is scorching tots, the much larger playground set to open soon features tall slides. Yes, tall ones! And lots of plants, bringing kids back to nature, and some wild-sounding "Tarzan Swings." That's not to mention a climbing tower -- unusual in these days of litigation -- and a huge sandbox.

"Playgrounds are very difficult to design," says Matthew Urbanski, a principal at Michael van Valkenburgh Associates, the park's designers and a leading light in landscape design. "There are just so many constraints, and there are very important safety issues you have to be aware of, and durability, and convenience, and those things start to override the whole design process." His team tried to take a step back and think about fun: What would really stimulate children's minds and, as he says, "exercise their bodies and expose them to hot and cold and wet and dry."

Well, I'd watch it on the hot. But otherwise, it's very encouraging. Last one to the Tarzan Swing is a rotten egg!

Lenore Skenazy is a public speaker and author of the book and blog, "Free-Range Kids." She has declared this Saturday, May 22, "Take Our Children to the Park … And Leave Them There Day."