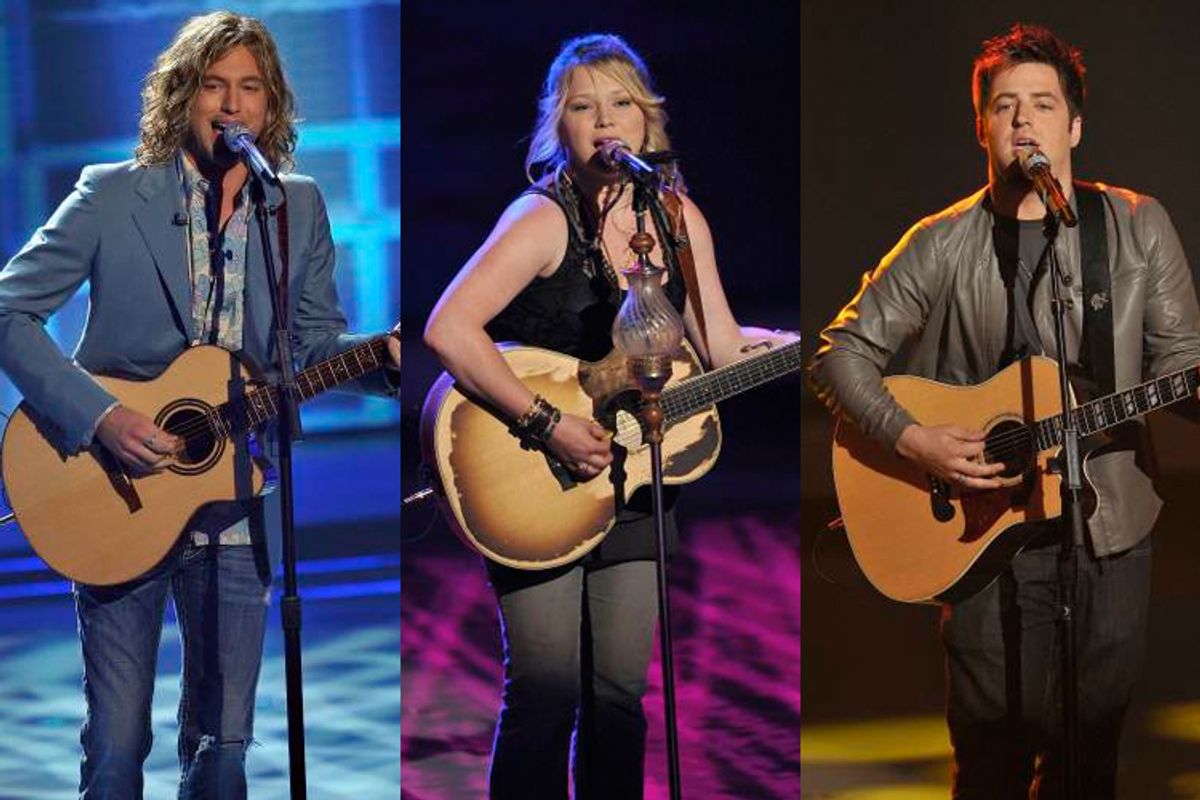 It was "two for the price of one" night on "American Idol" as Casey, Lee and Crystal "battled" it out for the Final Two next Tuesday night.  Each of them were finally able to pick a song of their choice, while the second song was picked by one or more of the judges.

Honestly, the show was more of a whimper than a bang.  But there were some moments that inspired goose bumps and hope.

Casey James started the show by saying he was just happy to still be there. Casey is, if nothing else, realistic. He’s damn lucky to still be in this competition and he has his golden locks to thank for that. Maybe when his gig is over, Playgirl magazine will be in the market for some models (his guitar could be strategically placed).

Casey sang Eric Hutchinson’s "OK, It’s Alright With Me."  Already I could hear the inevitable comparison by one of the judges. His performance was robotic as he stood there stuck on the stage as if he was a magnet and the stage was metal. His delivery was sluggish, almost as if he was bored.  His vocals were good, but nothing to write home about.

Randy: "The funny thing about those lyrics was that song was kind of just all right with me." (Yup, the inevitable comparison.) "I wanted to hear something more unique, interesting. This is down to the wire.  You just can’t do an easy song like that."

Casey stood there listening in his purple shirt looking like the cat that had swallowed the canary.  I have no idea why. Randy was right.

Ellen and Kara were equally underwhelmed, and Simon had plenty to add. He said in a solemn voice, "This isn’t going great, is it Casey?  It’s arguably the most important night of your life. If you were having dinner, that was the salad. There’s something more substantial hopefully to come. It sounded like you were busking for a couple of dollars instead of competing for 'American idol.'"

Crystal Bowersox was next and had chosen Melissa Etheridge’s "Come to my Window".  Crystal chose it because it was a song about "passion and love and things like that."

Randy didn’t find the arrangement compelling, and Ellen (who was wearing nautical gear, apparently waiting for California to drop in the ocean) added:  "Good song choice.  Melissa would be proud of you." Real helpful, Ellen.

Kara: "You got lost in the arrangement, and you weren’t strong acoustically. It was a good vocal.  You’re capable of  'a moment,' but this wasn’t it."

Simon: "I agree with the other three. This was not the most stunning version. What I like about you and what you did tonight, you haven’t compromised yourself as an artist. I have a lot of respect for you for that. You decided what is you and it was an honest performance. You made the right choice, congratulations." Exactly my point!

Lee was next and sang Lynyrd Skynyrd’s "Simple Man." Lee started out great. He had come a long way since the beginning. He even managed a smile mid-song. He had a minimal amount of pitchiness, but the last two notes sounded weak.

Randy: "Yo, uh, so Lee, great song choice. Brilliant song choice, dawg. You sounded amazing, somebody here is feeling like they could win this!  Lee!" Hey Randy, it wasn’t that great!

Ellen: "That’s what we’re talking about. You took this thing seriously. In the beginning, you were like a little baby lamb, shy, gentle, and quiet. Now you’re like a gazelle or an impala." OK, again, not helpful.

Simon: "I’m being honest with you Lee, I think the contestant song choices have been OK, but that song was absolutely on the money. I don’t think you won Round 1, I think you just crushed the other two."

OK, kind of vague. Where’s Rocky Stallone when you need him? Someone needed to knock some sense into these judges. Lee was very good but so was Crystal.

Randy and Kara picked John Mayer’s "Daughters" for Casey. Casey didn’t look like he’d moved at all since his last song. He tried to sing the lyrics with some conviction about fathers and daughters and mothers and daughters. It seemed like a cheap ploy for the parental vote, and I wasn’t convinced. I actually did enjoy his performance, but only because I’m a sucker for songs about parents and their daughters and I love that song.  Casey sang it as well as is possible for him, but ultimately, it didn’t quite cut it.

Randy: "The first song you did was OK but this fit you like a glove and I hope you continue this direction. Good job, dude."  What direction?  The only direction Casey is going is southeast and back to Texas.

Ellen: "A lot of daughters and mothers and who knows, sons will be voting for you." I’m a mother and a daughter and I was going to be doing no such thing.

Kara: "Casey, this showed the more artistic side of you and you’ve struggled to show your sensitive and vulnerable side. You did a good job." (Simon was being rude and smirking at Kara.)

Simon: "I think it was a much better song choice. The only issue I have is that it was a bit of a lazy arrangement where the climax was quite limp. Kara and Randy should have given you a stronger vocal moment." Despite Simon’s Freudian language, he was right.

The predictable infighting ensued as Kara and Randy were arguing with Simon about the song choice. Security had to be brought in to break the three judges up and Casey once again looked like the cat that had swallowed the canary.  What was that guy on, and where can I get some?

Crystal was up next with a song choice by Ellen. Oooh, did we want Ellen to pick a song?

Ellen chose "Maybe I’m Amazed" by Paul McCartney. Crystal was sitting on the steps on stage sans the guitar or the harmonica. I thought Crystal’s voice was great and good for her, she didn’t change the lyrics.  She sang, "Baby, I’m a man" and it was believable but in the best of womanly ways. She worked that song, the audience and her black leather boots.

Randy:  "Great song, yo yo, great vocals and America we’ve got someone else in to win it!"

Ellen: "I couldn’t have asked for more. You did it, you did it!"

Kara: "Crystal, you showed parts of your voice we haven’t heard until tonight.  You pushed it with no instruments. It was a huge risk for you and I think it paid off."

Simon: "What you just proved is that you’ve got soul and you worked outside of your comfort zone and I think after that, you may be thanking Ellen next week for putting you in the final."

Simon picked Lee’s song, which was "Hallelujah" by Leonard Cohen and/or Jeff Buckley.

Lee’s vocals were giving me chills (or perhaps I was being filled by the Holy Spirit). I thought he was clear and confident, and I loved the guttural raspy sound of his voice. Gospel singers walked quietly behind him but they didn’t distract me from a few pitchy notes by Lee.  And speaking of pitchy, did anyone else notice that his finish to the song was incredibly weak and definitely pitchy?  You may not have noticed because of the drums at the end.  Those drums were a small miracle for Lee and the judges never seemed to notice. Lee looked noticeably relieved.

Randy: "I’ve been waiting all season to see who is going to throw down the real gauntlet." (As opposed to the fake one.)  "I have to give it up to my boy and say that this was your biggest moment on this show."

Ellen: "That was stunning, just stunning." That was dull Ellen, just dull…not the song, you.

Kara: "Lee, you are what this show is all about:  Someone who starts in one place and ends up in an epic way.  You just owned the entire night."

Simon: "Lee, I’m very very proud of you because when this all started, you were working at a paint store, you were looking for a break and this show has given you a break.  With that performance, you proved that you are a fantastic singer, a great performer and I sincerely hope you will be here next week."

Geez, you would have thought Lee was Jesus Christ incarnate.

I guess Lee won Round 2, but I think I was being brainwashed by the judges who seemed hell bent on persuading the American voter that Lee was the top dawg and Crystal was close behind.

So this is it. Wednesday night, one contestant will be voted out and two will go to the finale at the Nokia Theater next Tuesday to compete for the title of "American Idol."  Logic would dictate that the final two should be Crystal and Lee.

But wait just a gol damn minute. Don’t count out Casey James just yet.  I did some investigative journalism and verified my belief that the tween voter yields a great deal of power when it comes to who gets voted off and who doesn’t on "American Idol."

And I’m not convinced the average tween is going to get all worked up  about Crystal. Crystal who defies convention, exudes strength and is vocally superior to both Casey and Lee combined.  Crystal who isn’t thin to the point of invisibility and yes, sure, needs a visit or two to the dentist but doesn’t give a rat’s ass. That is the beauty of Crystal. She is her own woman with a unique voice and the guts to sing songs on her own terms.

I’ll be singing "Hallelujah" tomorrow night if those tweens and the rest of the voters get it right and Crystal and Lee will be duking it out next Tuesday for the coveted title of "American Idol."  Let the best "man" win, but first Casey needs to take a hike, a very long one.