Will Richard Blumenthal drop out? And if he does, what happens? 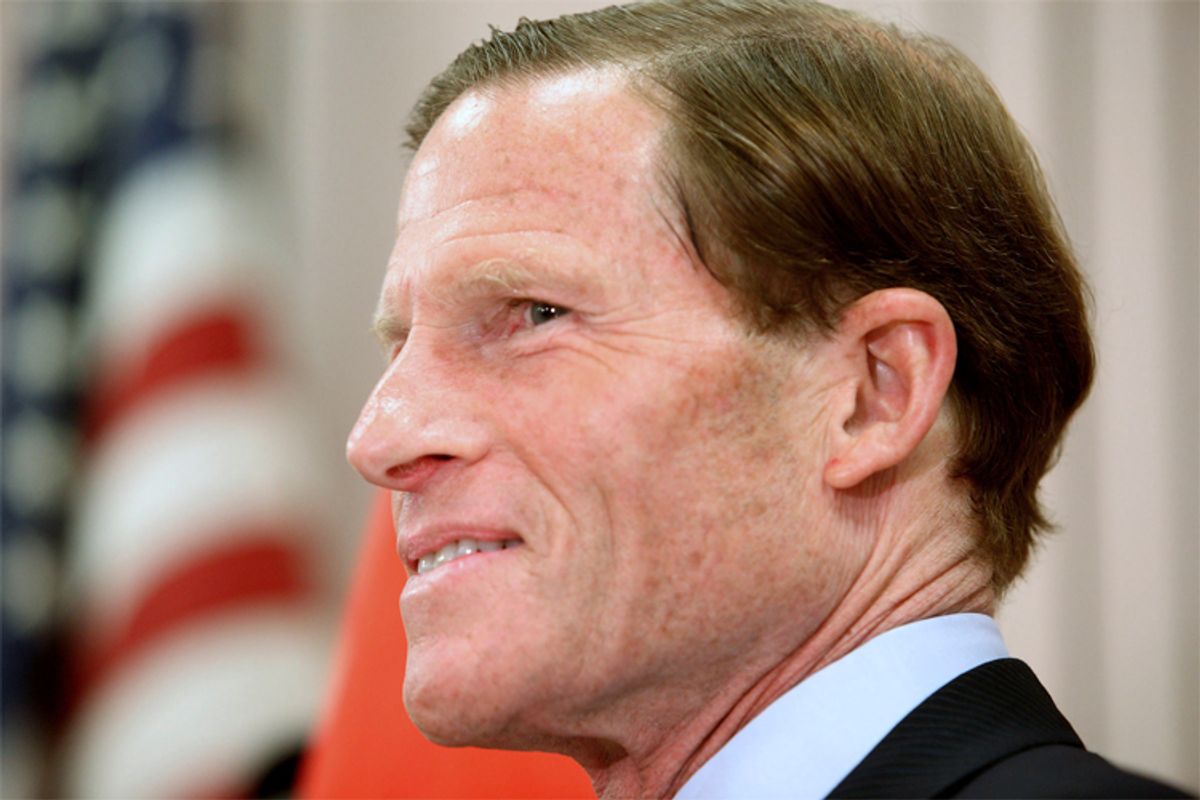 Connecticut's State Attorney General and U.S. Senate candidate Richard Blumenthal speaks to reporters at a Veterans of Foreign Wars post in West Hartford on May 18.
--

According to a Rasmussen phone survey released today, Richard Blumenthal's lead over Republican opponent Linda McMahon has shrunk from 13 points to 3. All because he sometimes forgot he didn't actually serve in Vietnam, during the war there.

This is a Rasmussen poll, so it might mean absolutely nothing. (Unless you believe the liberal line against Rasmussen -- that its terribly conservative house effect is intentional -- in which case it means that it's trying to push the "Blumenthal in trouble" narrative while the news is fresh.)

Today, the New York Times ran a follow-up to its story about how every now and then Blumenthal encourages the belief that he fought in Vietnam. (One odd thing is that the story's main source is former Republican congressman Chris Shays, who claims to be very friendly with and admiring of Blumenthal. Shays was also seriously considering a run for the Senate seat himself as of last year.)

But despite following up on the story, there's no new news. Most of the time, Blumenthal correctly recounted his service. Sometimes he didn't. He never corrected anyone who, based on his often vague language, assumed he fought in Vietnam. I'd say it's impossible to know, at this point, how damaging this will actually be to Blumenthal, and how effective his forceful response was. (Furthermore, I'm still not convinved Linda McMahon is electable. Doesn't anyone remember what her husband did to their daughter Stephanie?)

Steve Kornacki laid out the possible Blumenthal scenarios yesterday, but there's a new wrinkle: The Connecticut Supreme Court ruled that the state secretary of state is ineligible to run for Blumenthal's current job, attorney general. Which gives Blumenthal an out, should more reliable polls show his support collapsing.

What happens if Blumenthal leaves the race? The convention is this weekend. Anyone who gets 15 percent of the vote will make it onto the primary ballot. After the convention, anyone who can get the signatures of 2 percent of the enrolled membership of the Connecticut Democratic party (approximately 15,000 people) by June 8 can also qualify for the ballot. That's a tall order for anyone hoping to replace Blumenthal, should he turn out to be unelectable.

But after that petition deadline, and before the August primary, should a qualifying candidate remove himself from the race, the Democratic Party can select literally anyone it wants to replace him. So Blumenthal and Connecticut Democrats have months to figure out whether they need to find a new candidate.

Personally, I find Blumenthal's misleading Vietnam statements much sadder than outrageous. The guy clearly wants desperately for veterans to think he's one of them. But this aspect of his fantasy is much, much more annoying:

When it was his turn to speak, Mr. Blumenthal at one point brought up the subject of his military service and lamented that when "we returned from Vietnam" Americans had spit on soldiers, Mr. Shays recalled.

I know Richard Blumenthal's entire Vietnam experience is a guilt-induced daydream based primarily on half-remembered scenes from "Rambo: First Blood Part II," but the spitting thing is most likely a pernicious myth.