The chain adds plasma TVs, movable chairs and local flair. Will you stop hating them now? 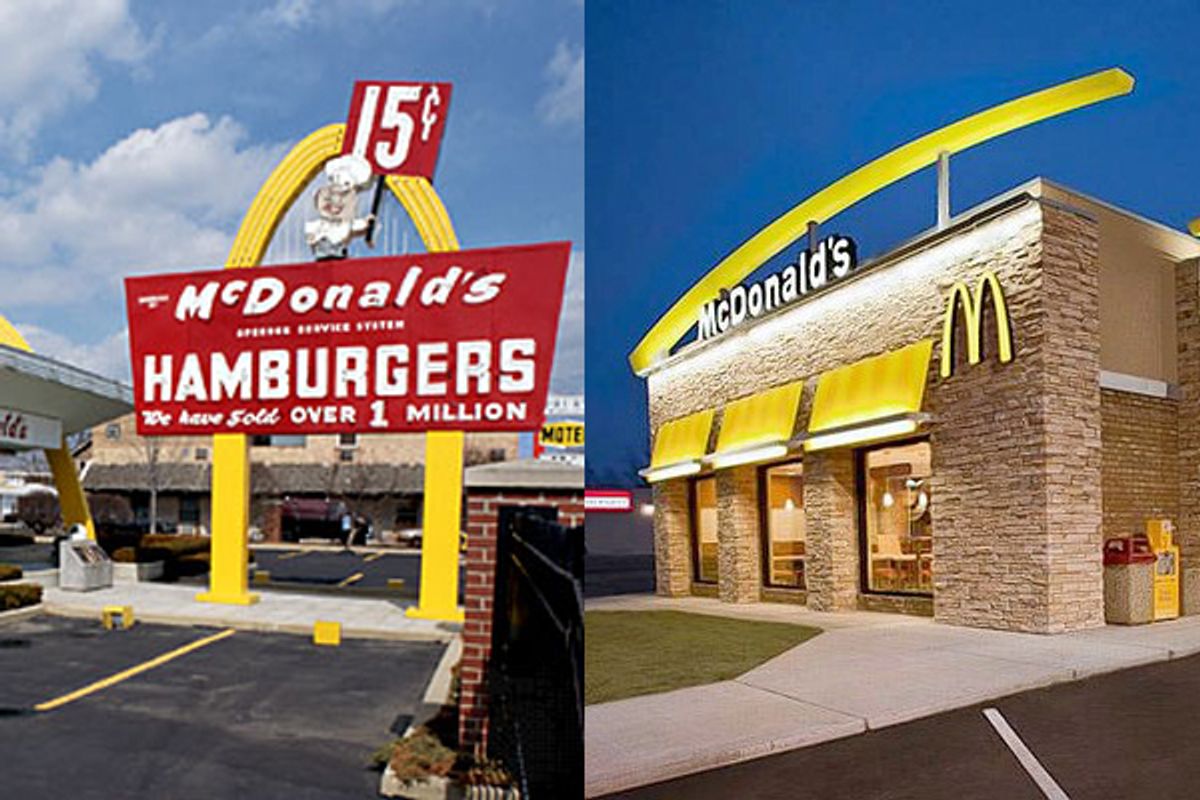 For those of you who've visited a McDonald's recently and thought to yourselves, "I really wish this place had more armchairs and space to play my online role-playing games on my laptop," I've got some very good news. The world's largest fast food chain is currently embarking on the biggest redesign of its franchises since the addition of Playlands. Over the next year, 400 to 500 of its restaurants will be transformed from the kitschy cafeteria-style establishments that we all know into something more upscale, technologically advanced -- and, surprisingly, more tailored to local communities.

You can say goodbye to the red mansard roof and those terrifying yellow arches on elevated poles. The new McDonald's has a more subdued and more generically middle-class suburban aesthetic. Its exteriors are made with brick, stone or stucco (depending on the environment), and its signage is more simple and features a brighter, less-'70s shade of yellow. The inside of the restaurants is also getting a major overhaul, including the creation of "linger zones" with Wi-Fi, armchairs and couches, barstool areas with plasma TVs (so lonely eaters can distract themselves with CNN and "Desperate Housewives"), more diffuse lighting and a muted color scheme that includes greens and olives. (You can check out a slide show here.)

"They're basically tearing them down and rebuilding them in a way that takes advantages of the recent shifts among consumers," says Darren Tristano, executive vice president at Technomic, a food industry consulting firm. The emphasis is on flexibility, and on encouraging people to spend more time within the actual restaurant by adopting the aesthetic of "fast casual" dining. Examples of "fast casual" include Chipotle and Five Guys -- restaurants where people tend to spend time and, more important, pay higher prices for slightly better-quality foods. "These are the chains that have succeeded," says Tristano, "and they've done so without drive-throughs, by attracting people into the restaurant itself."

Among the more dramatic "fast casual" shifts are McDonald's new movable chairs, which are no longer bolted to the floor. "That's a real change," says Stephani K.A. Robson, senior lecturer at the Cornell School of Hotel Administration who specializes in studying dining environments. "The bolted chairs were a way, on one hand, to always make the franchise look neat and, on the other hand, to encourage people to spend less time at McDonald's." And then there's the fact that restaurants will be able to tailor themselves -- by choosing different elements of the new design -- to their surroundings and community. As Max Carmona, the company's senior director of U.S. restaurant design, told the Chicago Tribune, "We have the flexibility to tweak them … to localize them."

It's a concession, on one hand, to increasingly restrictive building bylaws -- that often keep fast-food restaurants like McDonald's out of upscale neighborhoods -- but also, perhaps, to the increasing cultural prominence of food movements like locavorism and ethical eating. "There's been kind of a backlash against chains," says Robson, "and a lot of chains want to capitalize on this 'it's my neighborhood and it's different from yours' feeling."

Tristano agrees: "You're never going to convince people that McDonald's isn't a mass restaurant, but by creating a warmer feeling and tailoring them, you're encouraging people to linger."

And McDonald's isn't alone in its move toward modesty: Starbucks recently launched a pilot program to transform a number of its coffee shops into upscale and more alternative venues that look so different that few people would actually recognize them as Starbucks. The outsides of the shops don't prominently display the company's logo, the colors are lighter, the décor is fancier (sometimes even made with reclaimed wood), they host local events, and, in some cases, even serve alcohol.

Of course, a move like this, in which a company actively undermines its brand recognition, only makes sense if it's gotten so big that many people actually hate its guts. (A large part of the huge anti-Starbucks movement of the mid-decade was caused by the feeling that the company was overwhelming communities with ridiculous numbers of new stores, putting long-established coffee shops out of business.) It doesn't mean that these franchises are actually doing anything to help local communities, but it's hard to find fault with the philosophies behind it -- and even if it doesn't make you more inclined to spend money at McDonald's,  it will probably make you less inclined to wince the next time you pass one.