Where is Obama on bank reform?

Harry Reid is calling for an end to Senate debate on an eviscerated bill. It's time for the President to get mad 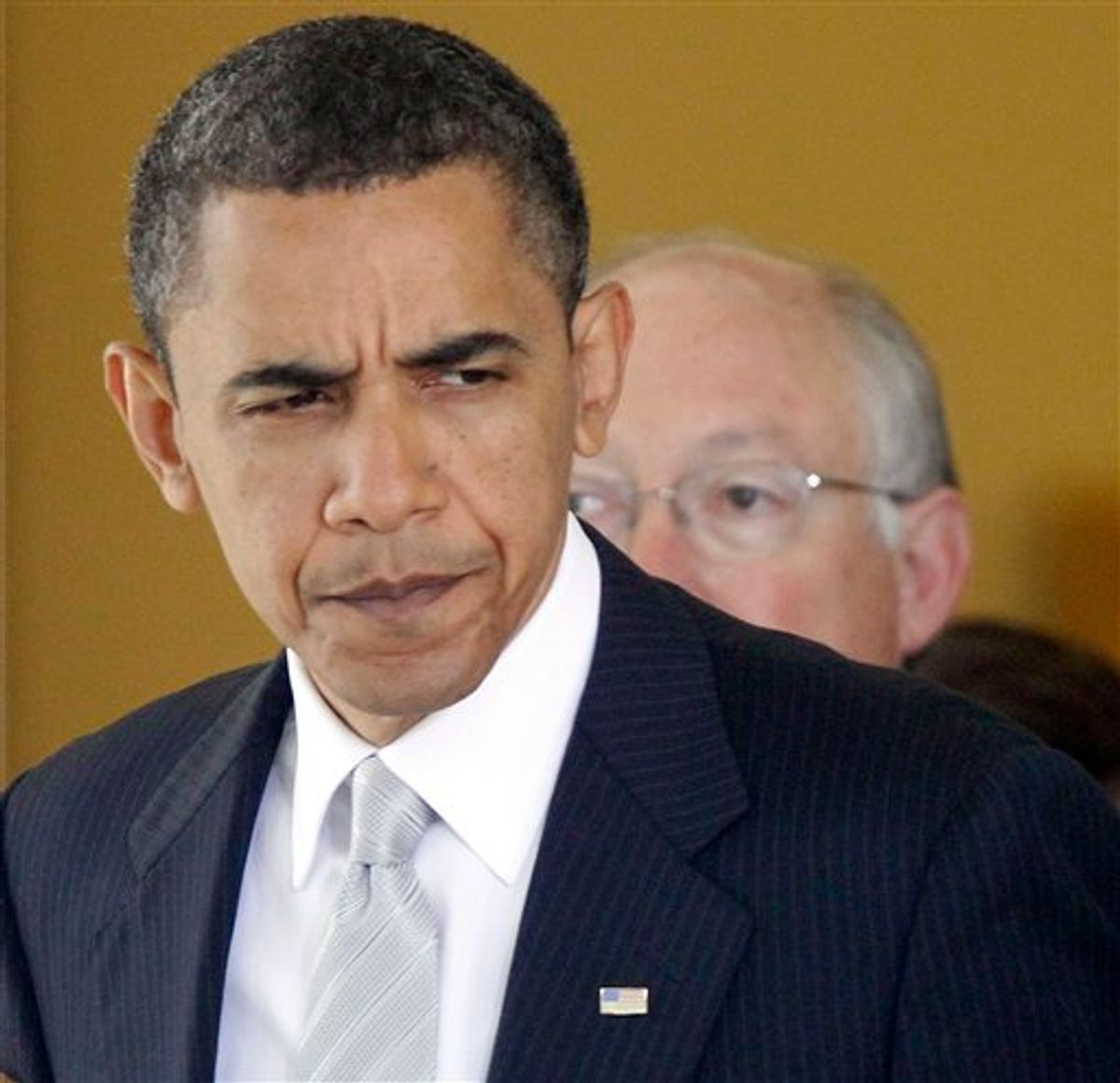 President Barack Obama, walks out the Oval Office of the White House with Sec. of Interior Ken Salazar, right, following his closed meeting with his Cabinet and other senior administration officials on the ongoing effort to stop the BP oil spill, Friday, May 14, 2010. (AP Photo/Pablo Martinez Monsivais) (AP)
--

Where is President Obama? Senate Majority Leader Harry Reid, D.-Nev., has called for a 2 p.m. EDT cloture vote Wednesday afternoon to end debate on the bank reform bill. But whether or not 60 votes can be found to stop either a Republican or a Democratic filibuster is practically irrelevant, because one of the most important parts of the bill, derivatives regulation, has been gutted by conservative Republicans working in collusion with top Democrats.

There's no other way to put it. Sen. Chris Dodd, D.-Conn., claims that he supports the Merkley-Levin amendment, which would ensure tough derivatives regulation along the lines of what both the White House and former Federal Reserve chairman Paul Volcker have declared necessary. But as it stands now, Merkley-Levin isn't even coming up for a vote, after Republicans blocked consideration of the amendment and Reid and Dodd did nothing to circumvent them. Quite the contrary, at the last possible minute, Dodd filed his own amendment that, if incorporated in his bill, will effectively eviscerate the currently proposed derivatives rules cooked up by Sen. Blanche Lincoln, D.-Ark.

There are plenty of people who think that Lincoln's rules go too far. Fine. But getting rid of them without substituting something meaningful in their place -- Merkley-Levin -- is a complete and total capitulation to Wall Street interests.

Harry Reid is currently claiming that Republican opposition to allowing a vote on Merkely-Levin is a sign that Republicans are doing Wall Street's bidding. And, yes, that's certainly true -- Mitch McConnell's current line of rhetoric, that the Dodd bill represents a "government takeover" of the banking industry, is an astonishingly vile piece of hypocrisy, even for him. But Reid's disingenuousness is over the top, as well, because he's rushing for a vote on a weak bill, without taking the time to hammer the GOP for their intransigence.

Liberal Democratic Senators are in an uproar, and may very well carry through on their threats not to vote for cloture. There may be enough moderate Republican yes votes for Reid to carry the day, but that would hardly be a victory for Democrats, or the cause of reform.

And that's where Obama comes in. Simon Johnson is 100 percent correct this morning: It is time for the President to stand up.

This is the opportunity that the White House claims it has long sought -- to have an intense fight on a financial reform issue that everyone can understand. Paul Volcker made his determination long ago: the big banks are too big and must, in this fashion, be broken up. Senators Merkley and Levin negotiated the precise language of their amendment in good faith. The Republicans have made their answer clear: No way....

This is a defining issue for the president. Either he takes up the Volcker Rule -- proposed by his administration, to great fanfare (and some skepticism) in January. Or he rolls over -- admitting that Wall Street has won.

At the penultimate moment on healthcare reform, the president came through with tough rhetoric and a stirring call to arms to legislators. That moment has come again. He should threaten to veto a bill without strong derivatives regulation, he should denounce efforts to prevent a vote on Merkley-Levin and he should make it clear that we need real reform, not a half-baked compromise engineered via backroom room deals that serves no one's interest but the banks.

<p>UPDATE: Still no word from Obama, but plenty of action on the derivatives front. Dodd announced that he would not go forward with his derivatives-killing amendment, and senators Merkley and Levin pulled off a maneuver that may bring their amendment up for a vote after cloture.