After the Randslide, neoconservatives dig out

Until Rand Paul won, neocons warned "he's not one of us." But that was then -- and now he's running away from Dad 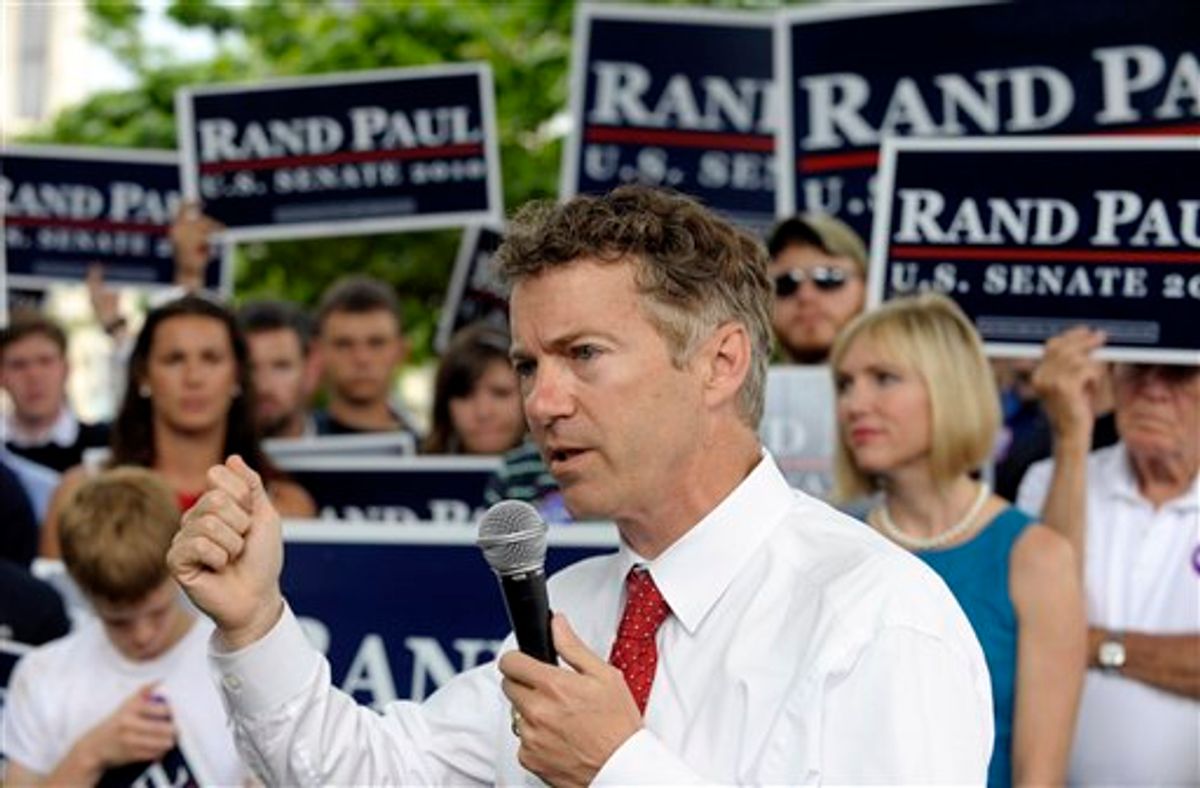 How will Republicans, and in particular Washington’s neoconservative Republicans, cope with libertarian-leaning Rand Paul as their party’s Senate nominee in Kentucky? Having denounced the son of Ron as a kooky isolationist only days ago, their responses to his victory have ranged from sugarcoating to stunned silence. Now they just want to hold that seat.

So the first order of business was to take down RandPaulStrangeIdeas.com, a feeble website erected by his primary opponent Trey Grayson to publicize controversial Paul statements and positions. (Much of the same substance can still be found at TooKookyforKentucky, another primary attack site that will probably come down soon.) Next came the neoconservative pundits straining to "make room" in the GOP for the doctor whose views they had earlier dismissed as quirky, strange and even disturbing. As Bill Kristol suggested a bit condescendingly, this baggage is what the Tea Party types bring with them:

At the end of the day, in American politics, you can't have a big, energetic grass-roots movement without having a lot of elements of it that you're not going to personally like or agree with. But to be fair to Rand Paul, there's a lot of distance between Rand Paul's agenda, which isn't exactly mine, and the caricature of nativism or isolationism.

But is it just a caricature? In a thoughtful post, Commentary’s Max Boot expresses doubt, although he too credits Paul for putting a little distance between himself and his radical dad:

Rand Paul has tried to dial back the extreme isolationist rhetoric expressed by his father, Ron Paul, who once suggested that 9/11 was our fault for provoking al-Qaeda…

But his victory is still bad news for Republicans who believe in a strong and active foreign policy. All you have to do is look at his website to see that he holds a quirky -- and untenable -- view of a "Fortress America" ... There is ample room to criticize and improve the UN, IMF, World Bank, WTO, and other organizations, but Paul’s suggestion that we not fund or join any international organizations suggests that he is advocating a fringe foreign-policy outlook -- one I hope is not representative of the Tea Party movement as a whole.

While not as mealy-mouthed as this excuse-laden NRO post by Jim Geraghty -- which anticipated the necessary post-primary change of the party line -- Boot blunts his criticism of Paul by noting that the Kentuckian opposes a “wholesale withdrawal” from Afghanistan or Iraq, that he wouldn’t close Guantánamo and supports trying alleged terrorists in military tribunals. But as every attentive right-wing pundit surely knows, those Cheney-lite statements were flip-flops by Paul, who knew he had to neutralize the neocon complaints. In late March, former Cheney aide Cesar Conda posted a list on National Review Online of Paul's most alarming departures from neoconservative dogma, with footnotes:

On the defense budget, Paul says we should cut what "we are doing militarily" (speech to Ron Paul for President supporters in Chattanooga, Tenn., February 2, 2008).

On terror suspects held in the Guantanamo Bay detention center, Paul once said, "They should mostly be sent back to their country of origin or, to tell you the truth, I’d drop them back off into battle ... You’re unclear, drop 'em off back into Afghanistan. It'd take them a while to get back over here" (speaking in Paducah, Ky., May 8, 2009)…

On Iran, Paul asserts: "Our national security is not threatened by Iran having one nuclear weapon." (speech to Ron Paul for President supporters in Burlington, Vt., October 1, 2007).

On Iraq, in an interview on "Antiwar Radio with Scott Horton" in May 2009, Paul said: "Yeah, I say not 'out of Iraq now,' I say 'out of Iraq two or three years ago' -- or 'never go in,' even better. But I think that when you get out the only thing that you need to propose and that people will accept is that you do it in an orderly fashion."

On September 11th terrorists: "When my dad stood up to [Rudy] Giuliani [at a 2008 presidential debate] and said that our foreign policy caused us some of what we got on 9/11, he didn’t say that it justified what those people did to us. But we have to understand that there is blowback from our foreign policy.” (remarks at Western Kentucky University, April 7, 2009).

On the Patriot Act: "I am absolutely opposed to the PATRIOT Act, would've voted no on it and would vote to sunset any provisions as quickly as we could." (Rand Paul on Freedom Watch, Fox News, May 20, 2009).

Until a few months ago, that is, Rand Paul sounded just like Ron Paul. Yet where Rand formerly avowed his agreement with his father on most issues, today he emphasizes their differences. It is a tinge of opportunism that has infuriated some early supporters, who feel he solicited their money and endorsements and then sold them out to smooth his way into the Senate. On the website of the Ludwig von Mises Institute, for instance, where the true libertarian faith is upheld, one downcast Paul fan  expressed deep frustration over his support of Gitmo and military tribunals:

What good is it to win if you don't stand for anything? This is very disappointing. Rand Paul deceived his supporters, and took money from them without telling them about his fundamental ideological differences with his more principled and honest father.

There is simply no doubt that the primary pushed Paul away from the purer libertarianism he once espoused. Exactly what he believes today isn’t easy to say, but he is certain to displease both his left-liberal admirers and his reluctant center-right endorsers. His primary opponent lacked the skill and conviction to trap him in those contradictions, which is precisely what Democratic nominee Jack Conway must do if he hopes to win in November.