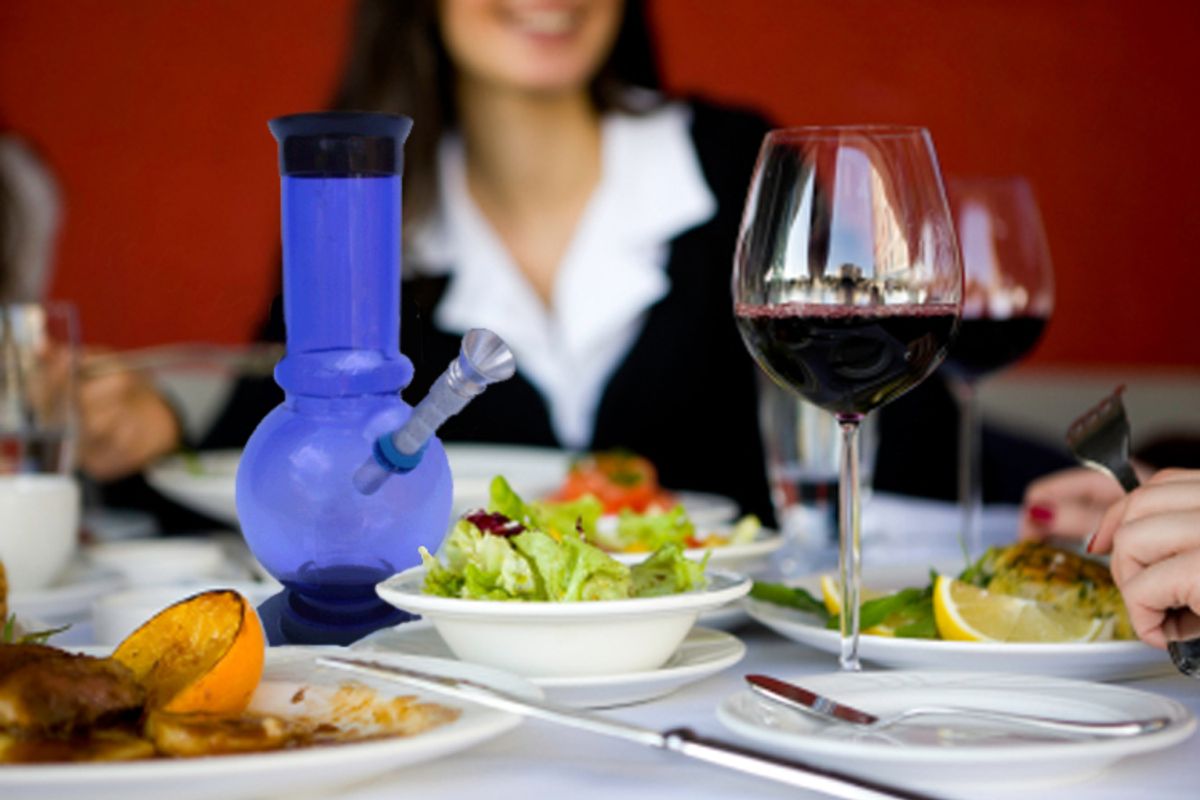 If you've met a lot of professional chefs, you probably know the following: A lot of them are often really, really stoned. It makes sense: Chefs work long hours, in a frenetic environment -- and pot is a great way for them to let off some steam, and, for several chefs I know, make some easy extra money on the side. But according to today's New York Times, this restaurant stoner culture is increasingly having an influence on not just the chefs' off-duty moods, but on the food they serve in their restaurants. And this, obviously, calls for a food trend: Hello, upscale stoner food!

As Severson writes, "a small but influential band of cooks says both their chin-dripping, carbohydrate-heavy food and the accessible, feel-good mood in their dining rooms are influenced by the kind of herb that can get people arrested." Among the examples of this haute pothead cuisine are Roy Choi's Kogi taco trucks (which fuse Mexican and Korean food), New York's Momofuku Milk Bar (which serves things like "cereal milk" soft serve), Roberta's in Brooklyn (with its breakfast burrito pizza) and Animal in L.A. (which serves an upscale version of French Canadian poutine, composed of French fries, cheddar and gravy).

According to Choi, this new emphasis on stoner food is similar to the cult that arose out of the Grateful Dead in the '60s: "Then, people who attended the band’s shows got high and shared live music. Now, people get high and share delicious, inventive and accessible food." And, according to him, stoner food is a way for restaurants to appeal to the "everyman dude" -- who, apparently, spends a lot of time getting high -- and bring new, presumably lower-middle class people into unfamiliar restaurant environments. "It’s like come here, here’s a cuisine for you that will fill you up from the inside and make you feel whole and good." (Severson also ties this change to the growth in medical marijuana.)

It's a fun trend to write about -- and, to be honest, kind of makes me want to get stoned -- but it might actually have more to do with the spread of comfort food than with the growing accessibility of good pot. The last few years have seen the resurgence of homey foods that are often carb-heavy and deeply satisfying (like macaroni and cheese), largely because during recessionary times people like to eat hearty foods that remind them of home (or a time when people weren't killing their families over their job loss). Most stoner food is greasy, salty and crunchy (and often fried) -- but that's a type of food that a lot of chefs are going after these days.

High-end chefs have actively been upending ideas about class and food for years (see: the gourmet food truck trend, the upscale pretzel), so the idea that pot-inspired cuisine is bringing in new working-class customers (and I have a hard time believing that stoners are really that big of a consumer demographic) may be true, but it's not exactly revolutionary. Selling comfort food as "stoner food" might be a good way to attach a countercultural vibe to your restaurant (e.g., the San Francisco chef who serves quail eggs with a bong), but, in the end, it's probably largely a gimmick.

And then there's the fact that if you really were stoned and had a bad case of the munchies, the last thing you'd want to be doing is standing in line outside Momofuku Ssam Bar, in New York's East Village, waiting two hours for a table. I, for one, would be lumbering over to the nearest bodega, and grabbing three bags of Tostitos.