What Tuesday's results mean (and what they don't)

Arlen Specter is done, Rand Paul is a step closer to the Senate, and Blanche Lincoln is in trouble. What it means 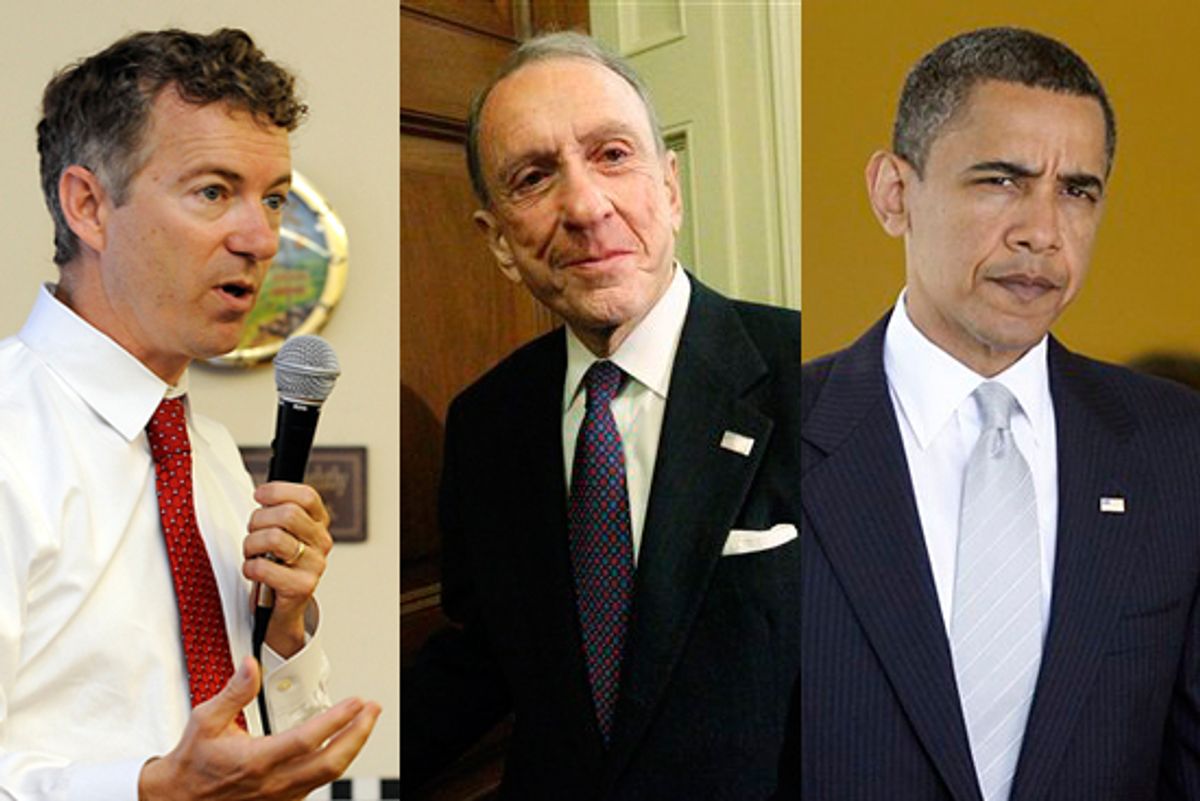 This wasn't about the White House: Sure, President Obama endorsed Arlen Specter and (though you heard a lot less about it in Arkansas than in Pennsylvania) Blanche Lincoln. And no, it didn't help.

But don't read Tuesday night's results as a rebuke to the White House. In Arkansas, where Obama won only 38 percent of the vote in the 2008 elections, he never figured into the race. And in Pennsylvania, Specter -- who spent his career as a Republican -- was a flawed vehicle for the White House's message. A primary election in which only the most dedicated Democrats turned out hardly means a rejection of Obama.

All the support the party establishment gave Specter, after all, was mostly just payback. Specter's switch a year ago gave Democrats the 60th vote they needed to overcome Republican filibusters (after Al Franken was finally seated), and his support before that had helped pass the economic stimulus. By now, though, Specter isn't the 60th vote anymore; Obama didn't even care enough about whether he won or lost to risk a late campaign appearance on his behalf. Sestak -- who stubbornly resisted entreaties to quit the race -- hammered Specter constantly for cutting a deal for the White House help. But he also said he wants to be Obama's "closest ally" if he makes it to the Senate. That doesn't exactly sound like an anti-White House message.

There are signs of an enthusiasm gap: In January's special Senate election in Massachusetts, voters came out in surprisingly high numbers. A total of 2,253,737 ballots were cast that day -- the most in a non-presidential statewide contest in the Bay State since 1990 -- as Republican Scott Brown defeated Martha Coakley.

In Pennsylvania's Democratic primary on Tuesday, it was a different story, with turnout light across the state. In Philadelphia, for instance, it was on pace to hit around 170,000. Compare that to the city's turnout in the 2002 gubernatorial primary (between ex-Mayor Ed Rendell and Bob Casey) when it was nearly 290,000. Statewide, the Specter-Sestak turnout tally was on course to be significantly lower than the '02 total.

Sure, primaries and general elections are different species. But the contrast between Massachusetts and Pennsylvania speaks to the nature of midterm elections: The in-power party's base tends to be disengaged, while the out-of-power party's base is motivated (along with independents, who latch on to the out party as a protest vehicle). So it is that a hotly contested Senate primary did little to stir Pennsylvania's Democratic electorate, while the opportunity to deliver a blow to Barack Obama and the Democratic Congress sent independents and Republicans (and even some conservative Democrats) flocking to the polls in Massachusetts.

Don't fear the establishment: In Kentucky, the Senate Republican leader's preferred candidate was destroyed in a Tea Party wave. In Arkansas, incumbent Sen. Blanche Lincoln struggled to win, much less get 50 percent of the vote, and a candidate no one took seriously at all wound up with 14 percent. In Pennsylvania, Arlen Specter's whole campaign boiled down to a full-throated defense of incumbency and a collection of powerful endorsements.

It's always easy to oversell the benefits of being in office and the usefulness of having other politicians weigh in on your behalf. But in 2010, it's clear the establishment has very little clout, in either party, and incumbents need to start looking at their experience as a liability, not an asset.

Specter, in particular, ran the ultimate insider's race. At his final press event Monday, he had boasted of his 20-plus votes for minimum wage laws. On Tuesday, he dropped by the Famous Deli for Philadelphia's traditional Election Day lunch gathering of political operatives and union bosses -- and sent a few dozen campaign volunteers to stand around outside, as if to show the power brokers he had a presence, instead of going to drag voters out to polling places in the rain. None of the pork he'd brought home over the years was enough to help him overcome a general Democratic revolt over his party switch; Sestak positioned himself as an outsider, hoping to tap the lingering anger at the system that have made the last two election cycles about change, and will likely power November's voting, as well.

Sestak's victory isn't a liberal triumph: At first glance, the storyline out of Pennsylvania looks rock solid: Joe Sestak attacked Arlen Specter -- former Republican -- from the left and won, despite support from the Democratic establishment in Washington, Harrisburg and points between. But it's not really that simple. Sestak and Specter barely disagreed on anything; Specter opposed the troop surge in Afghanistan, which Sestak opposed, and they both supported the healthcare reform bill. Late in the campaign, Sestak ripped Specter for attacking his support of an assault weapons ban, but he used that mostly to remind voters that Republicans had pulled out the same issue against Barack Obama in 2008.

Actually, independent polls showed -- and Sestak campaign advisors told Salon -- many conservative Democrats liked Sestak better than liberals did. Specter actually led Sestak in polls among liberal voters, and Sestak led Specter among conservatives. Sestak's camp says his early TV ads, which focused on his biography -- especially his career as a Navy admiral -- meant their man was introduced to voters first as, basically, a military guy; that's not the kind of thing that screams "liberal" to the electorate.

Essentially, Sestak won over progressive voters for two reasons: Many of them already liked him for his 2006 campaign against Republican Rep. Curt Weldon, and Arlen Specter spent most of his career as a Republican. Expect him to talk about "change," and sound some populist, outsider themes during the fall campaign -- but don't look for him to become a new liberal hero.

A Republican House isn't inevitable: The GOP's confidence in its 2010 prospects has been soaring -- and on paper, it’s made sense. Midterm elections always favor the out-of-power party, especially when unemployment is hovering near double digits. And there's plenty of low-hanging fruit for the GOP to pursue this year -- Republican-friendly districts that ended up in Democrats' hands thanks to the collapse of the GOP in the 2006 and 2008 elections.

But Tuesday offered Republicans a sobering reality check, as the party failed to win a special election in the only House district in America that flipped from John Kerry in 2004 to John McCain in 2008. Yes, the GOP has a built-in excuse: Democratic turnout in Pennsylvania's 12th District was aided by the state's Democratic Senate primary. But that only counts for so much. The profile of the 12th -- working-class, culturally conservative, never too keen on Obama in the first place -- made it a perfect target for the GOP. But they ended up losing -- by nearly 10 points. Republicans need to pick up 40 House seats to win back the chamber in November. That number looks a lot more imposing after Tuesday than it did before.