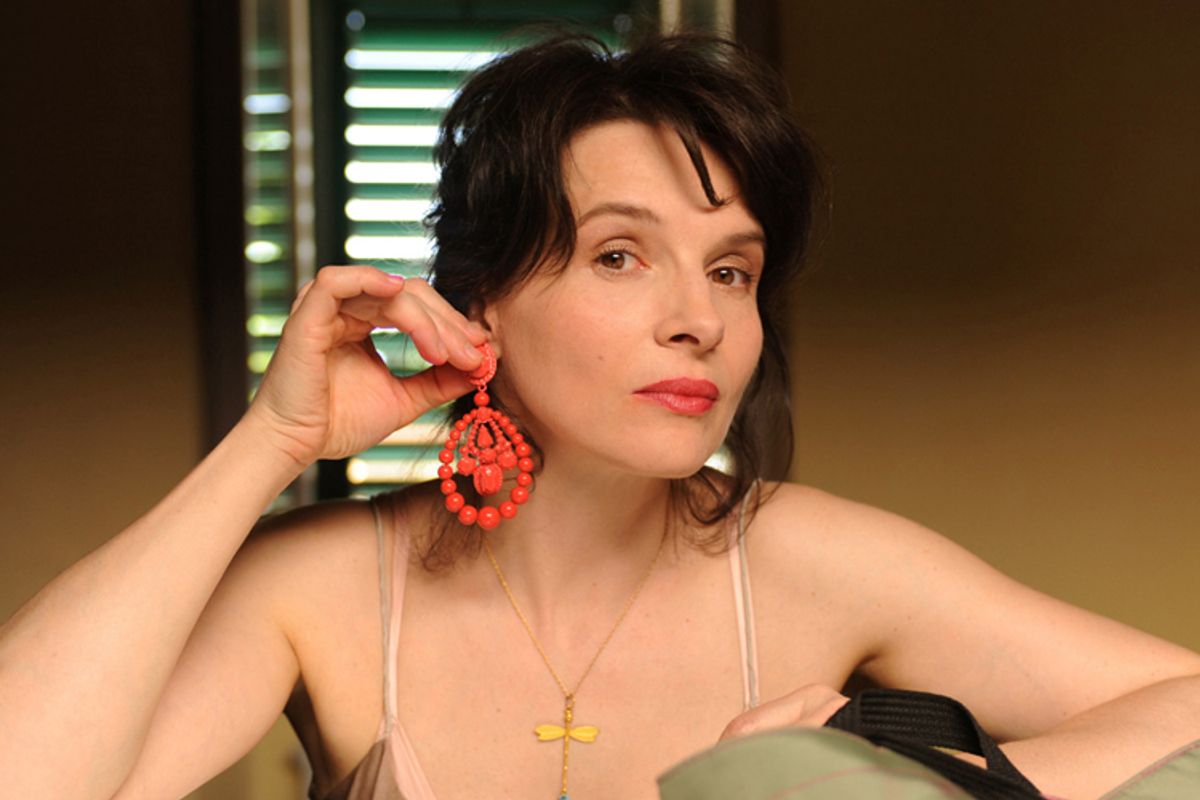 CANNES, France -- Legendary Iranian director Abbas Kiarostami, who won the 1997 Palme d'Or with "A Taste of Cherry" and had a brief American art-house moment with "The Wind Will Carry Us," slides smoothly into upscale Western filmmaking with "Certified Copy," an intriguing, not-quite love story featuring French superstar Juliette Binoche, English opera singer William Shimell and the spectacular Tuscan countryside. Although this probably isn't Kiarostami's most major work, it could introduce him to a much wider audience.

On one level, "Certified Copy" is exactly the kind of film it looks like -- an elegant, wistful and picturesque tale of two ships passing in the Tuscan sunlight, in which not much really happens. But in fact it's, well, a clever copy of that kind of film, with lots of other things under the surface. This story bristles with ideas and intelligence, and the more you stick with it, the more complicated it gets. Ultimately, Kiarostami isn't just inquiring into the nature of love, marriage and relationships, he's probing the porous boundary between stories and reality.

Binoche plays a nameless woman who lives with her son in the Italian city where British author James Miller (Shimell, a debonair, erudite presence in his screen debut) has landed on his book tour. She's a journalist who writes about books, and offers to take him on a brief driving tour to a nearby village so they can chat. Even before they set out, Binoche's 10-year-old son jokes that she's decided to fall in love with Miller.

Miller's book has the same title as the film ("Copia conforma," in Italian), and it's apparently about the idea that a copy of something -- a reproduction or facsimile -- is every bit as good, socially and psychologically speaking, as the so-called real thing. At first, this seems like a dry, academic excursion into theory, but Kiarostami has something else in mind. Binoche's character takes Miller to see an 18th-century forgery of a Roman painting, one so good it is sometimes called the "Original Copy," but the Tuscan village they visit also happens to be one where dozens of couples come every day to get married, and the specter of all that youthful optimism sends each of these 40-somethings on their own private trajectory.

Miller and the woman are clearly attracted to each other, and a bit irritated with each other too. One gathers they both have some experience with marriage (although that's never made explicit). Anyway, when a cafe proprietor assumes they're in fact a married couple, Binoche doesn't correct her. Instead, she plays along: It's been 15 years, my husband works all the time, I never see him, we fight a lot. When Miller returns from making a phone call, he joins in the game, and they continue their walk, sparring like a pair who really have been together 15 years.

Is Kiarostami suggesting that a spur-of-the-moment pretend marriage, an original copy, means as much as the real thing? I'm not sure about that, but he is saying that the stories we tell ourselves hold exceptional power. "Certified Copy" goes right up to the point of suggesting that we create our own reality, and that this man and woman can actually walk through the walls of the universe into some "Sliding Doors"-style alternate existence where they're having a fight and making up on a gorgeous Italian afternoon, just as they've done for years. Adult viewers should be intrigued by Kiarostami's dazzling images and tricky questions when IFC releases the film later this year.