The lesson of Rand Paul: libertarianism is juvenile

Grown-ups need to stop taking the ideas of libertarianism seriously 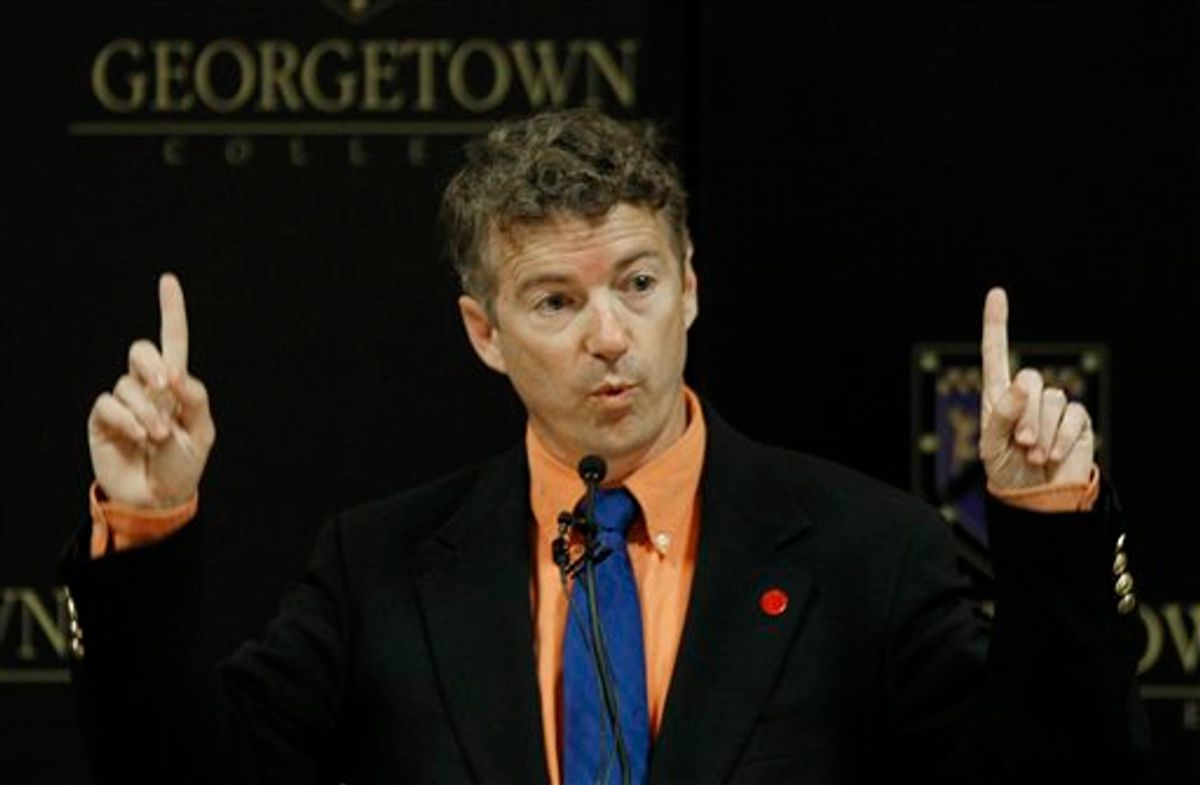 Rand Paul blew up the Internet. Did you notice? Here's how it went down: first, he suggested unmistakably that he opposed the Civil Rights Act. Then he tried unsuccessfully to weasel his way out, under near-implacable questioning. This was when people got really worked up. So Paul put out a press release, the strategy of which was more or less to deny that the previous 24 hours had happened. In the meantime, those of us who hail from the Internet have lost the ability to talk about anything else.

Mainly, of course, we've been condemning and mocking Paul. But there's a group that’s lined up to defend him as well. The basic claim is that, while Paul was of course wrong to oppose  civil rights legislation, it was an honest and respectable mistake. As Dave Weigel put it on Twitter (hence the weird sentence), "Rand doesn't mean harm, is suffering as old libertarian debate moves into prime time." (Weigel wrote a longer defense of Paul yesterday as well. For an excellent response, see this post from Salon editor Joan Walsh.)

Various figures who stand a few notches in toward the mainstream from Paul have made  arguments similar to Weigel's. It was a mere theoretical fancy, they say, nothing should be made of it. A staffer for Sen. Jim DeMint, R-S.C., calls the whole thing "a non-issue." Thanks, white people, for clearing up that whole civil rights thing for everybody else. Not important!

But, lest Paul be allowed to escape, those of us who do want to make something of this need to broaden our argument. It's not just that he screwed up and said something stupid because he's so committed to a purist fancy. No, it's worse than that. Libertarianism itself is what's stupid here, not just Paul. We should stop tip-toeing around this belief system like its adherents are the noble last remnants of a dying breed, still clinging to their ancient, proud ways.

Now, to be clear, before continuing: there are legions of brilliant individual libertarians. Weigel himself, for example, is a great writer and reporter, and a true master of Twitter. We've never met, but by all accounts, he's also very much a stand-up fellow. But brilliant, decent people can think silly things. And that's what's going on here. It's time to stop taking libertarianism seriously.

Ironically, the best way into this point comes from another brilliant libertarian, legal scholar Richard Epstein. Says Epstein, "To be against Title II in 1964 would be to be brain-dead to the underlying realities of how this world works."

There’s the key -- "the underlying realities of how the world works." Because never, and I mean never, has there been capitalist enterprise that wasn't ultimately underwritten by the state. This is true at an obvious level that even most libertarians would concede (though maybe not some of the Austrian economists whom Rand Paul adores): for the system to work, you need some kind of bare bones apparatus for enforcing contracts and protecting property. But it's also true in a more profound, historical sense. To summarize very briefly a long and complicated process, we got capitalism in the first place through a long process of flirtation between governments on the one hand, and bankers and merchants on the other, culminating in the Industrial Revolution. What libertarians revere as an eternal, holy truth is in fact, in the grand scheme of human history, quite young. And if they'd just stop worshiping for a minute, they'd notice the parents hovering in the background.

Libertarians like Paul are walking around with the idea that the world could just snap back to a naturally-occurring benign order if the government stopped interfering. As Paul implied, good people wouldn't shop at the racist stores, so there wouldn't be any.

This is the belief system of people who have been the unwitting recipients of massive government backing for their entire lives. To borrow a phrase, they were born on third base, and think they hit a triple. We could fill a library with the details of the state underwriting enjoyed by American business -- hell, we could fill a fair chunk of the Internet, if we weren't using it all on Rand Paul already. And I don't just mean modern corporate welfare, or centuries-ago agricultural changes. Most left-of-center policymaking can fit into this category in one way or another.

Think about the New Deal. Although libertarian ingrates will never admit it, without the reforms of the 1930s, there might not be private property left for them to complain about the government infringing on. Not many capitalist democracies could survive 25 percent unemployment, and it doesn't just happen by good luck. Or, take a couple more recent examples: savvy health insurance executives were quite aware during this past year that, if reform failed again, skyrocketing prices were likely to doom the whole scheme of private insurance (itself a freak accident of federal policy) and bring on single-payer. Here's a fun sci-fi one: Imagine the moment in, say, twenty years, when the evidence of climate change has become undeniable, and there’s an urgent crackdown on carbon-intensive industries. Then coal companies and agribusiness will be wishing they’d gotten on board with the mild, slow-moving reform that is cap-and-trade.

Get it? The government didn't just help make the "free market" in the first place -- although it did do that. It's also constantly busy trimming around the edges, maintaining the thing, keeping it healthy. The state can think ahead and balance competing interests in a way that no single company can.

The libertarian who insists that the state has no place beyond basic night-watchman duties is like a teenager who, having been given a car, promptly starts demanding the right to stay out all night. Sometimes, someone else really is looking out for your best interests by saying no. (This isn't to say the state is looking out for the best interests of everybody, or even most people. The point is just that, however Glenn Beck might hyperventilate, the government doesn't want to destroy the market. It wants to preserve it, and it does this job better than the market can on its own.)

And that's why the best rap on libertarians isn't that they're racist, or selfish. (Though some of them are those things, and their beliefs encourage both bad behaviors, even if accidentally.) It's that they're thoroughly out of touch with reality. It's a worldview that prospers only so long as nobody tries it, and is too unreflective and self-absorbed to realize this. In other words, it's bratty. And that's bad enough.