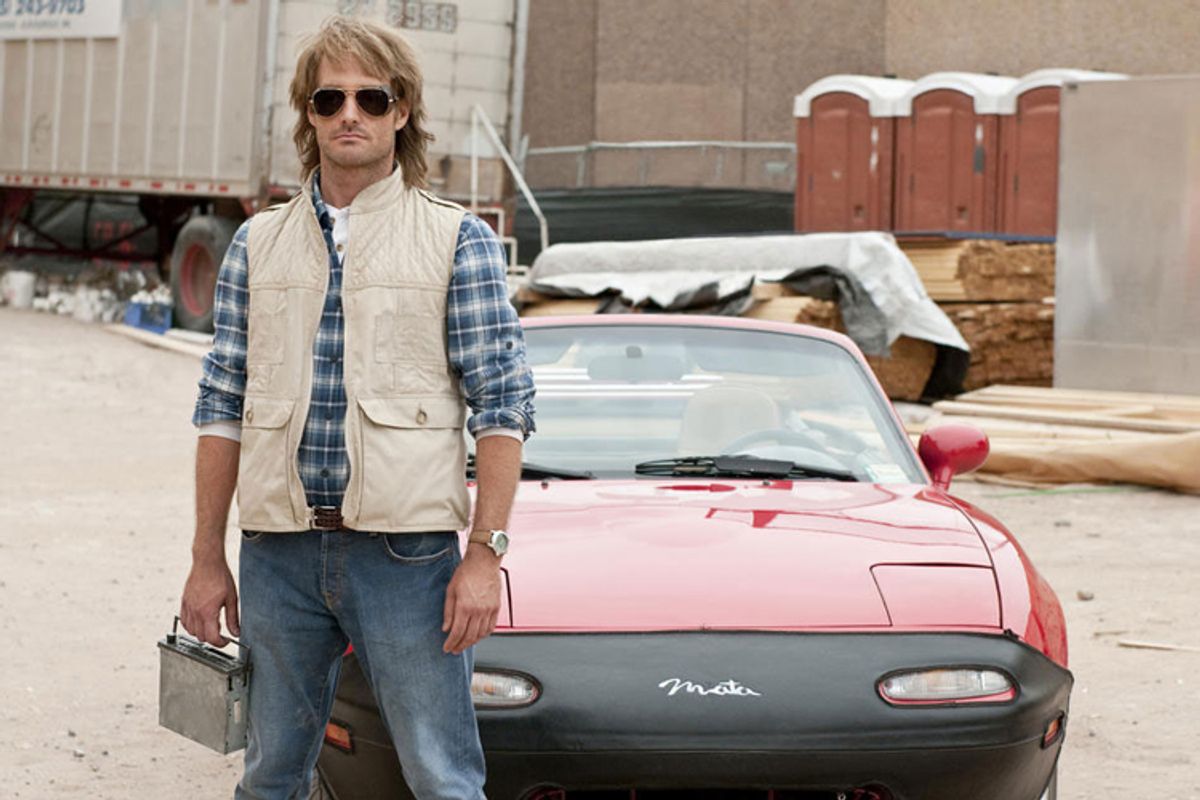 WILL FORTE brings "Saturday Night Live's" clueless soldier of fortune to the big screen in the action comedy "MacGruber".
--

Even by the sub-basement standards of "Saturday Night Live" movies, the source material for "MacGruber" is pretty thin gruel. Generally lasting no more than half a minute and sandwiched into the gaps between sketches, the MacGrubers are the kind of repetitive one-gag bits that "SNL" has perfected the art of hammering into the ground.

The setup, every time, goes like this: MacGruber (Will Forte) and his trusty assistant are trapped in a locked room with some manner of deadly device, whose countdown timer is rapidly approaching zero. After calling for, and always receiving, a random assortment of household junk, MacGruber begins to jury-rig an improvised device that will save them all, MacGyver style. And then he gets distracted. With seconds on the clock, he launches into a reverie, or perseverates on some bit of personal drama (his son's coming-out, in one memorable instance), and then, kablam! Every time.

Distilling "SNL's" self-parodic penchant for recycling material to its carbon-copy essence, the MacGrubers repeat several times throughout the course of an episode, so that their sheer lack of variety becomes part of the joke rather than detracting from it. In short, they take everything that makes "Saturday Night Live" such a tiresome, half-lame anachronism and transform it into a modest virtue.

The "MacGruber" movie is a different proposition. The script, by Forte, John Solomon and Jorma Taccone, who also directed, has its share of running gags, like the fact that no matter what dangerous situation he's about to walk into, MacGruber makes sure to pop out his car stereo and take it with him. But Taccone, who is also partly responsible for "SNL's" digital shorts, takes the (relatively) long view, playing it straight for long sequences in order to give the jokes room to breathe.

Although Forte carries over his character's iconic mullet and unvarying wardrobe -- checked shirt, khaki vest -- the movie's reference points have shifted from '80s TV to '80s movies, specifically the peaceful-warrior genre embodied by "Rambo III" and its less memorable ilk. When MacGruber is tracked down by his old friend Col. Faith (Powers Boothe), he's wearing monk's robes somewhere south of the border, hiding out as he has been since his fiancée was blown up by the villainous Dieter von Cunth (Val Kilmer) -- on their wedding day, no less.

MacGruber has only been hiding out for a decade, but it seems substantially longer. Although it's not explicitly a period piece, "MacGruber" rolls back the clock whenever it can, to the extent that it's mildly disruptive when a piece of bona fide 21st-century culture like the Hives' “Tick Tick Boom” makes its presence felt. Col. Faith's office is decorated with a day-glo portrait of Ronald Reagan, and the soft rock that blares from MacGruber's prized car stereo is vintage '80s schmaltz like Toto's "Rosanna." The plot hinges on the disposition of a renegade Russian warhead -- no dirty bombs or sleeper cells here. Taccone successfully apes the style of a cut-rate production from the Golan-Globus heyday, flooding scenes with massive backlight to disguise the limited scope of the sets. Substantial chunks of "MacGruber" could pass as vintage action movies from the period, if not especially good ones.

"MacGruber" dutifully rehearses the genre's standbys -- so dutifully, at times, that the joke disappears altogether. Sometimes, it's just a matter of holding off on the punch line, as when a stock getting-the-team-together montage is capped by MacGruber's accidentally blowing his elite squad of battle-hardened commandos to smithereens. But when there's no capper, what's left is a drab run-through without the conviction to sustain even the movie's brief running time.

As she does with so many lackluster "SNL" sketches, Kristen Wiig brightens her scenes by playing against the grain, tossing off a hushed aside in the midst of a shouted confrontation or unexpectedly bursting into song. And as the other member of MacGruber's reconstituted dream team, Ryan Philippe makes for an ideal straight man; the clenched quality that often limits his performances adds to his role as a by-the-book soldier who can't believe he's taking orders from this cocky loon. Surprisingly, both Boothe and Kilmer, who've been known to devour large chunks of set dressing elsewhere, seem reined in and lifeless here. Can they only play comedy by accident?

Forte, another of "SNL's" MVPs, plays the part with a mixture of arrogance and giddy enthusiasm. Even when he's doing something plainly idiotic, like informing the bad guys of his precise location in order to provoke a confrontation, he does it with a goofy grin. If there was a little bit more behind that smile, we might be able to buy MacGruber as a flesh-and-blood character rather than a sketch-show refugee. The bibs and bobs are all in place, but the life-saving device never quite works as planned.