The Tea Party candidate other Republicans hate is ahead in Nevada

The "Chickens for Checkups" woman is the GOP's best shot at taking down Harry Reid, but voters are abandoning her 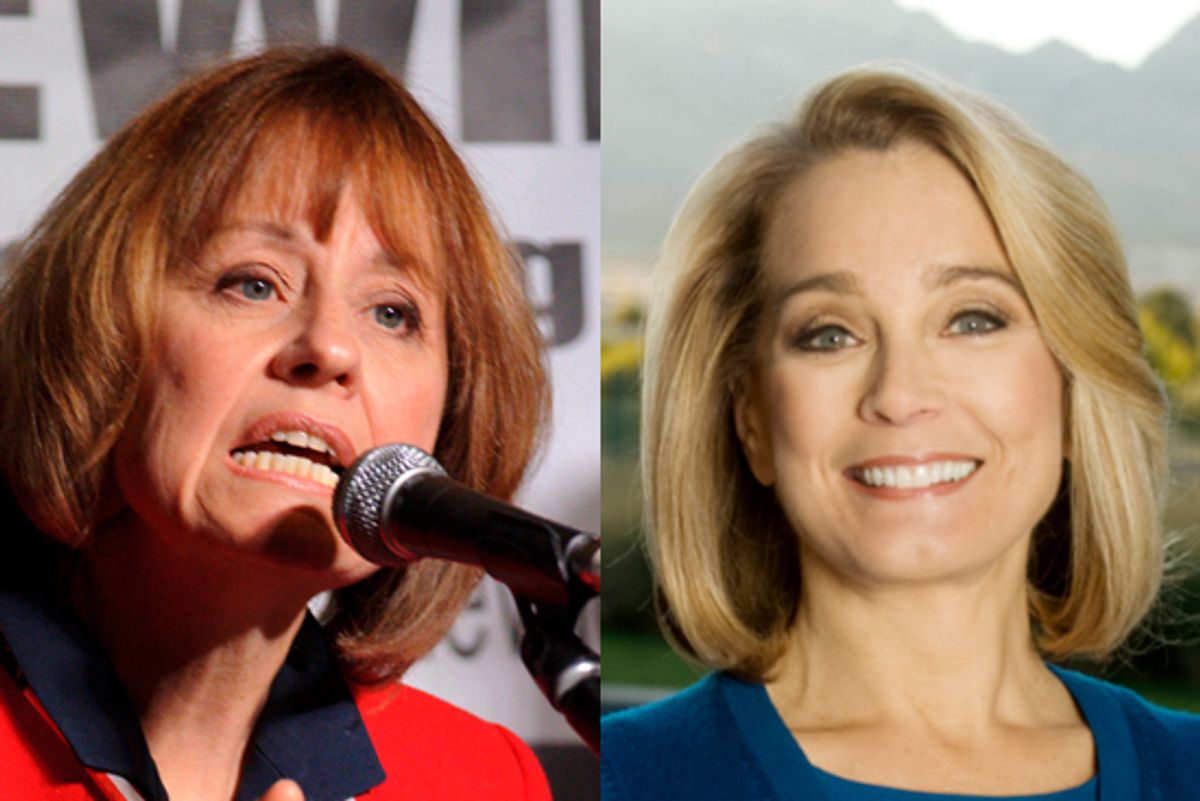 Republican U.S. Senate primary voters in Nevada, you have three choices: the "chickens for healthcare" lady, the one the Tea Party people chose for you, and the other guy.

Senate Majority Leader Harry Reid looks like a doomed incumbent facing an almost-impossible reelection bid. But because, as I said, the GOP is trying to make things challenging for themselves, national conservatives are pouring money into the race to defeat the moderate Republican with the best chance to knock him off.

Reid is so hated that any candidate who wasn't portrayed by Dick Smothers in a classic Scorsese movie could trounce him in November, but the Club for Growth and the Tea Party Express have their heart set on Sharron Angle, a former member of the Nevada Assembly who is roundly hated (and feared) by the mainstream Nevada Republican establishment.

Angle once ran against (and lost to) the longest-serving Republican lawmaker in the state. That man, state Senator Bill Raggio, has a warning for Angle:

"Anything's possible with so many people in the race, but if Angle's the GOP candidate there would be a lot of supporters who would turn to Reid," Raggio said Thursday in an interview. "All I can tell you is when she lost the race to me, I never heard from her. She was not a gracious loser."

In fact,a Public Policy Polling survey from yesterday has Angle leading, 29% to 26%. (Danny Tarkanian, the "other guy," is polling at 24%.)

That poll was sponsored by the liberal group Patriot Majority, because national political groups on both sides of the aisle are heavily invested in Lowden going down. Liberals because Lowden is almost certainly a stronger candidate against Reid, and conservatives because... Lowden just doesn't hate taxes enough, I guess. (Who even knows what their beef is. It's not like Lowden voted for TARP while hugging Obama -- they just suspect that she might.)

Of course, all that Club for Growth money isn't what convinced Sue Lowden to announce that we was "not backing down" from the system of trading chickens for healthcare. Surprisingly, this cogent attack on the legitimacy of the Fed didn't win her any Tea Party support. Instead, everyone just laughed at her. On Tuesday she humiliatingly denied saying what she is on video saying:

So, this is a campaign that's basically foundering.

The Tea Party Express is now begging Tarkanian, the "other guy," to drop out of the race. If he did, the majority of his support would almost certainly go to Angle. According to a press release, the Tea Partiers "really like Danny," but "it has become increasingly clear... that his campaign has failed to catch fire with voters." (Tarkanian, thus far, has declined to withdraw.)

Angle's only "scandal," so far, was her attempt to introduce a Scientology-sponsored drug therapy "treatment" introduced into women's prisons. (She denies a connection to the Church of Scientology, but still "vehemently defends" the program.)

A couple months ago, I would've said liberals should let Reid lose so we can get a stronger majority leader. But Reid's panic has made him a surprisingly effective legislator (in fits and starts, anyway). So I think we can safely support the crazy one that Reid has a chance against, in the name of an entertaining race.