Who is more "un-American"? Rand Paul or Obama?

Welcome to the new McCarthyism. The Tea Party wunderkind calls the president out for being mean to BP 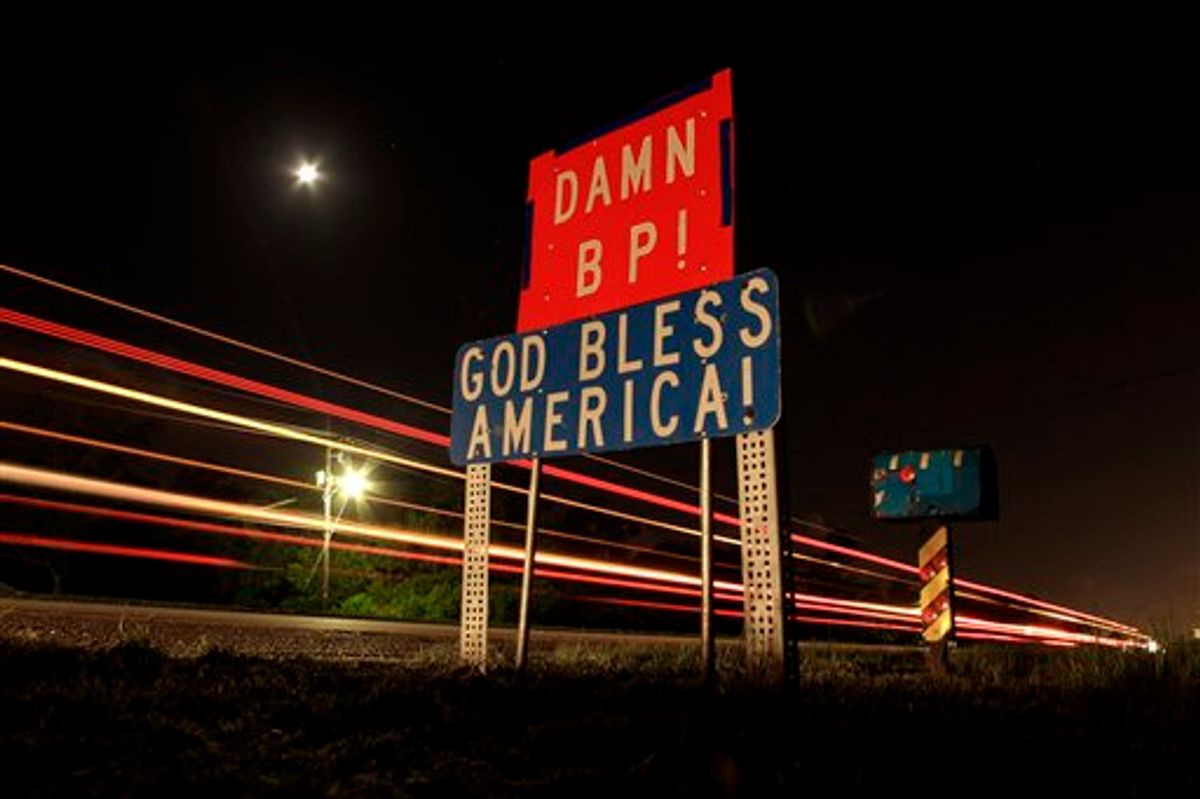 A sign chastising BP is seen along a highway south of Belle Chasse, La. Thursday, May 20, 2010. One month after the BP's Deepwater Horizon oil rig explosion, oil continues to leak into the Gulf of Mexico and has begun washing onto Louisiana coastline. (AP Photo/Charlie Riedel) (AP)
--

"What I don't like from the president's administration is this sort of, 'I'll put my boot heel on the throat of BP,'" Rand said in an interview with ABC's "Good Morning America." "I think that sounds really un-American in his criticism of business."

Personally, I think it sounds really un-American to criticize someone else's choices of words as "really un-American." But Obama's got a thick skin -- he can probably handle yet another white Southerner accusing him of a failure to be sufficiently red-white-and-blue. I'd also like to see Paul use that "accidents happen" line on some Louisiana shrimpers, and see how it works for them.

But aside from the sheer hysterical ludicrousness of criticizing someone for engaging in "criticism of business" in the year 2010, when we have more recent examples than we can possibly count of businesses behaving irresponsibly, recklessly and criminally in their single-minded pursuit of profit, Paul's basic stance is actually quite useful; it highlights a core weakness in libertarian theory: its lack of a robust mechanism to ensure that the natural environment is not devastated by the actions of businesses.

Quite simply, unregulated markets do a very bad job of preventing private enterprise from doing nasty things like dumping sewage into rivers or polluting the air, or overfishing the oceans. Quite the opposite -- unregulated markets ensure that businesses will attempt to minimize their production costs to the lowest extent possible, regardless of the impact that has on non-customers, whether those be people, plants or animals, or the atmosphere. BP's "accident" in the Gulf is actually a great example of what happens when you let an industry self-regulate: Critical decisions are made on the basis of their impact on the bottom line (like whether to conduct an expensive, time-consuming test that will determine just how good the cement seal on your well is) and not on what the potential costs of a worst-case scenario disaster might entail. So-called externalities -- the costs that are imposed on non-customers by a firm's actions -- do not show up on the balance sheet ... unless government takes action.

Markets did not clean up smog in Los Angeles or bring Lake Erie back to a semblance of life or rescue the California condor from extinction. Governments that passed laws putting the boot on the neck of private industry did.

I am sympathetic to the libertarian dream in which all disputes can be handled in court, with judges and juries ruling on how to appropriately incorporate externalities into the cost of production for private enterprise. Rand Paul and I would probably disagree on how to value, say, a pristine redwood grove or a coral reef, or -- the big kahuna -- carbon dioxide emissions, but I'd love to be confident that we could depend on a judge, without having to lean on government sanction, to properly figure out what Exxon's liability for global warming might be.

But capitalism's track record in such affairs is not encouraging. The people need a vehicle for enforcing their collective will and that vehicle is government.

During his acceptance speech after winning the Republican primary, Paul attacked Obama for going to the climate summit at Copenhagen and "apologizing for the Industrial Revolution." Of course, he did no such thing. But it wouldn't be completely out of bounds to do so. I'd feel pretty guilty about looking a Gulf of Mexico dolphin in the eye right about now.

Of course, the majority of humanity has derived great benefit from the Industrial Revolution, riches and health unimaginable to most of the people who have ever lived. But the question of whether we have properly accounted for its costs is still open. And the notion that businesses will do so on their own, without being criticized, is incredibly juvenile.